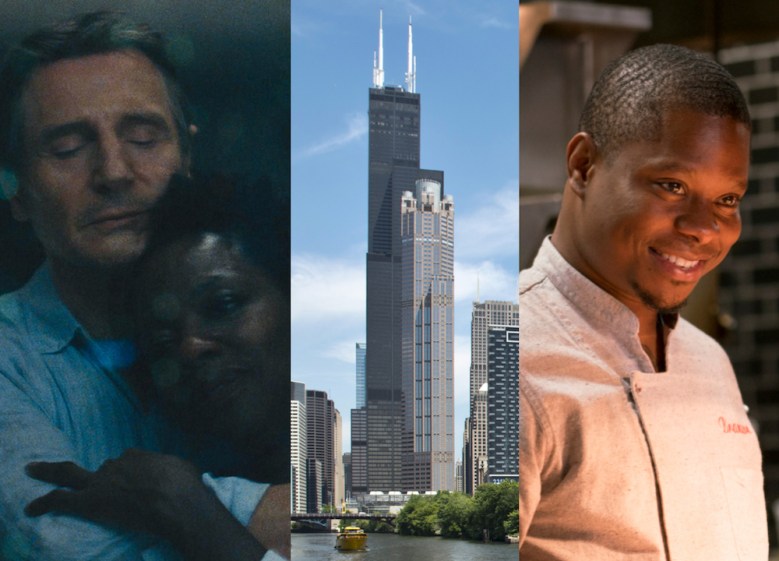 Even though Lynda La Plante’s original “Widows” TV show was set in London, Steve McQueen knew he needed Chicago to bring his 2018 adaptation to life. “London wasn’t it. London had moved on,” McQueen said. “I wanted a contemporary place, a modern city, and Chicago seemed to be that place. Politics, race, corruption, policing, gender, all those things, it was all there, in Chicago.”

Between McQueen’s new film and “The Chi,” Lena Waithe’s award-winning Showtime drama, the Windy City is having a moment. Both utilize the city’s history and personality in ways that speak directly to its struggles and distinctions, and remind us just how relevant Chicago is to the country and beyond.

“From microscope to telescope,” McQueen said. “You’re focusing on Chicago, but really, you’re telling a story about where we are in the world. You could be talking about, to a certain extent, what’s going on in London, Munich, Paris, New York, and other places in the world. That’s what it is: It’s a reflection of how we live today.” 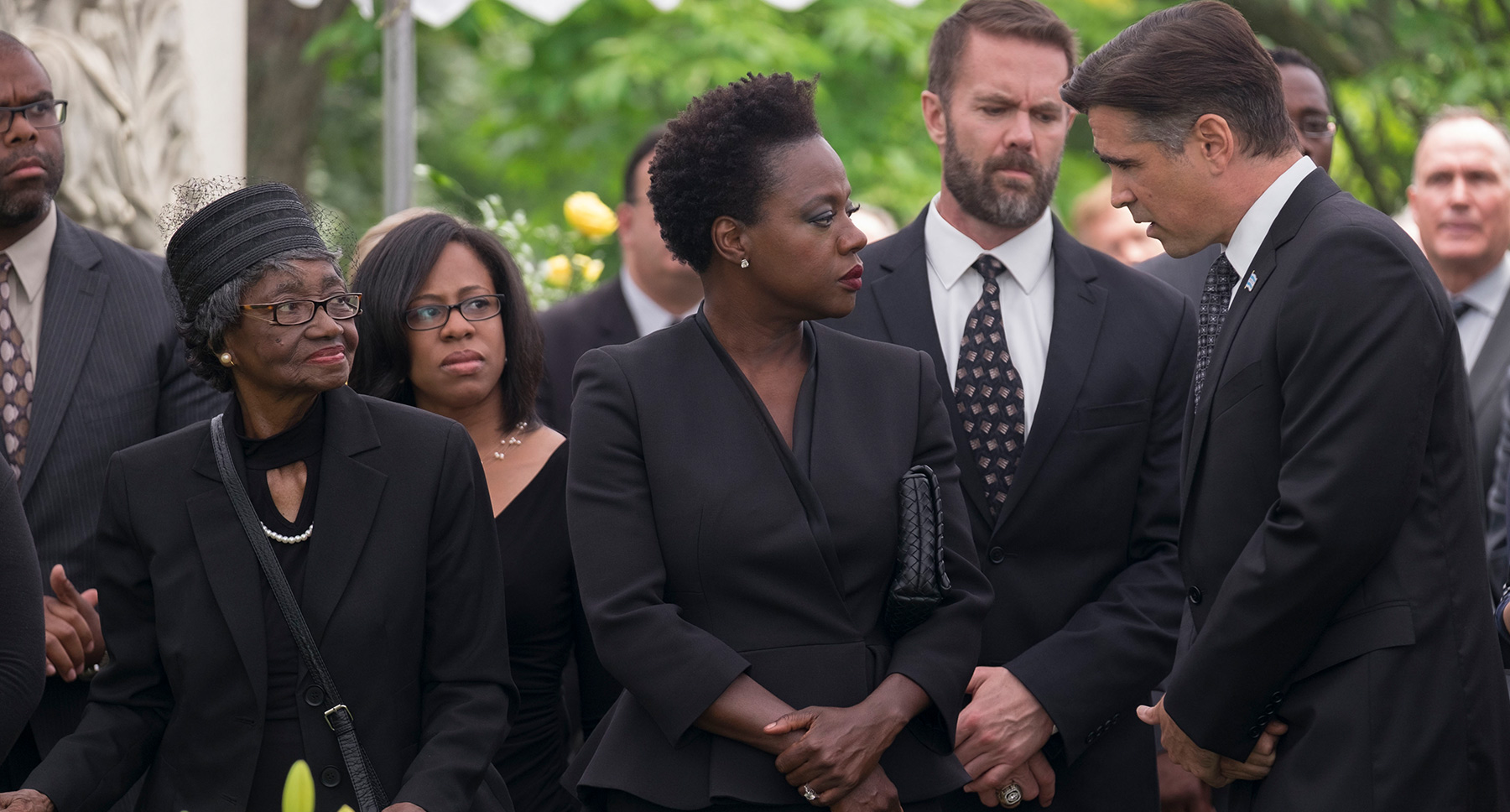 “It was real. That happens in Chicago, [and] it’s crazy.”

A British miniseries adapted by a London-born director doesn’t seem like an obvious vessel for portraying Chicago’s political and racial divisions. But McQueen first came to the city in 1996, when Chicago’s Museum of Contemporary Art displayed his video installation “Five Easy Pieces.” At the same time, his future wife Bianca Stigter covered the 1996 Democratic National Convention as a reporter, “so my very first footprint in Chicago has always been art and politics — always,” he said.

McQueen immediately noticed the city’s “odd” racial divide, and Chicago remains one of the country’s most segregated cities. “Widows” exemplifies that separation through its women: Veronica (Viola Davis) is a wealthy philanthropist suffering from great losses; Linda (Michelle Rodriguez) is a struggling small business owner; Alice (Elizabeth Debicki) is an abused Polish immigrant, and Belle (Cynthia Erivo) works multiple jobs on the South Side to support her kid. Despite being tied together by their husbands and the city they share, the characters never met until circumstance forced their hands.

“We’re in this city of fantastic, amazing cultures and backgrounds, but also, at the same time, extremely divided by race,” said Gillian Flynn, a Chicago resident and McQueen’s co-writer. “And that’s part of what ‘Widows’ is about — the idea you can live in the same city your whole life and never meet someone who’s different than you, unless you try really hard — or lose your husbands in a fiery crash and become forced to [come together].”

Still, the most striking visualization of Chicago’s segregation is shown in real time during a car ride, as McQueen’s camera moves from a poverty-stricken campaign stop to the luxurious headquarters and home of a prospective city alderman. Captured in one, uninterrupted long take, the audience listens to Jack Mulligan (Colin Farrell) scream at his assistant Siobhan (Molly Kunz) while they watch the neighborhood change outside the car.

“What [was important] for me was seeing that landscape shift, from a sort of vacant lot in a decrepit area populated by black people, into a much more leafy, upper-middle-class, if not upper-class, neighborhood. And it was real. That happens in Chicago. It’s crazy,” McQueen said. 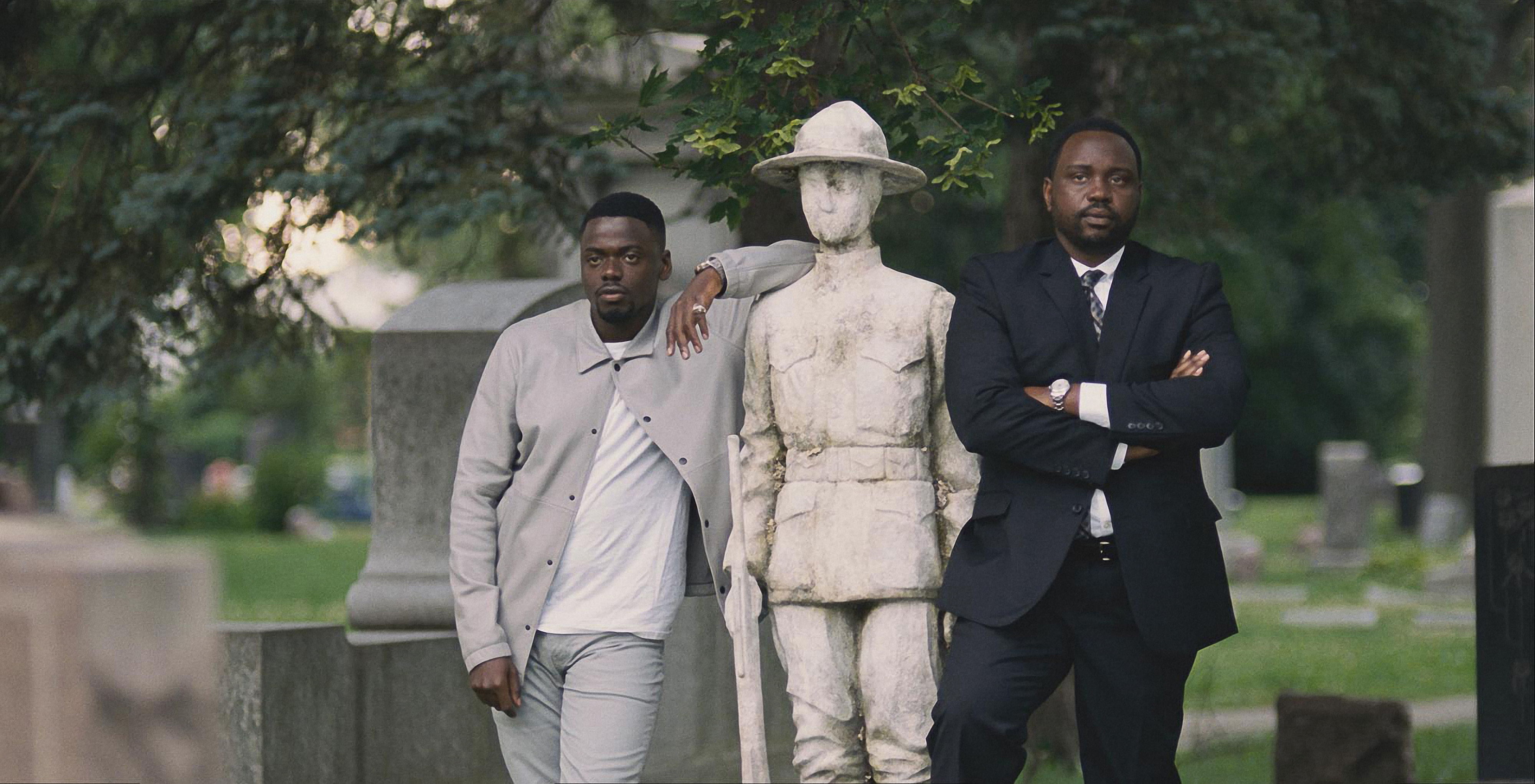 Flynn said they both did “tons” of research and spoke to everyone from local community leaders and cops to the FBI and a professor who helped get Laquan McDonald’s videotape released. Through it all, Flynn remembered McQueen getting hung up on an important local colloquialism.

“[People kept saying] ‘I got a guy,'” she said. “That’s just what you say in Chicago. ‘I got a guy.’ And Steve was like, ‘Excuse me sir, but what does that mean? ‘You got a guy?'” He’s got this ex-con who was explaining it [to him], and the other thing he kept saying to me was, ‘Gillian, what was just being described to me is criminal activity.‘ He kept saying that, and you become so inured to it. The simple, transactional things in Chicago, you just come to take for granted — like, ‘I got a guy.'”

That attitude helped the writers understand Chicago’s ingrained corruption. The film’s central political family, the Mulligans, is modeled in part after the Daleys, a Chicago political dynasty from the early ’80s through today. Richard J. Daley (1955 – 1976) and his son, Richard M. Daley (1989 – 2011), served as mayor for more than four decades combined. They become infamous for taking care of their own at great cost to the rest of Chicago, nearly bankrupting the city.

“Mayor Daley was kind of [the model], but not just him,” McQueen said. “You go back to people like Al Capone and their infiltration of the political system with organized crime. It’s been going on forever and a day, as far as Chicago’s concerned. From day one, these areas were basically gangs which turned into social clubs, which got legitimized. A lot of America is legitimized crime. It’s the foundation of this country. If it’s killing Native Americans or slavery, it’s legitimizing crime.”

Another distinctly American problem is gun violence, which has reached “epidemic” levels in Chicago. McQueen examines it to frightening extremes through Jamal Manning (Brian Tyree Henry) and his brother Jatemme (Daniel Kaluuya), two gang members who challenge the Mulligans for the alderman seat.

“Violence makes violence, unfortunately,” McQueen said. “Take the example of Jatemme. His life has been about violence, but at some point he gets numb to the violence, gets bored with the violence, so then he gets perverse with violence. […] At a certain point, he gets so bored with it that he doesn’t even participate. So that’s how it is, and it happens to a lot of young black men in Chicago and elsewhere — not just black men elsewhere. But you’re numbed by it, and it has an effect on you in a real way.”

While America regularly reels from mass shootings, Chicago is still trying to correct an unprecedented spike in gun violence. Multiple reports have linked Chicago’s racial segregation and income inequality to the violence in its poverty-stricken neighborhoods, and political corruption lies at the root of both issues. “Widows” manages to incorporate all of these topics into a thriller ostensibly about a heist.

But if “Widows” focuses on the darkness, then “The Chi” strives to find the light. 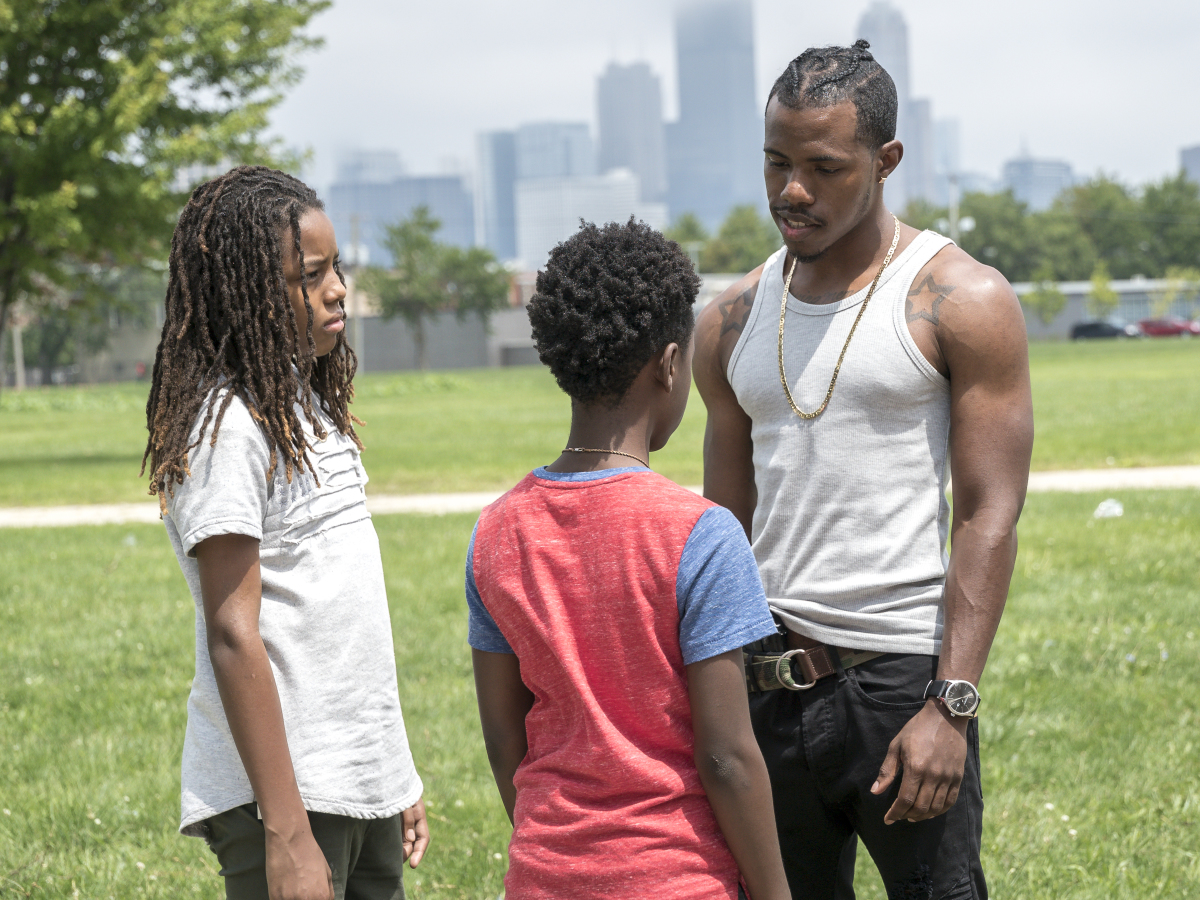 Michael Epps, Alex Hibbert, and Vonzell Scott in “The Chi”

“This is where I’m from, and this is the story I wanted to tell.”

Created by Lena Waithe, “The Chi” features an expansive, predominantly black cast and focusing on how a fateful tragedy affects the surrounding community. However, Waithe didn’t want the show to be another sad story about poverty, pain, and oppression.

“The thing is, it’s not all darkness,” Waithe said. “Every city has its own personality, so you go to any city and there’s darkness and there’s light. For me, [‘The Chi’] is about capturing both. The reason I’m telling the story is it’s about where I’m from, so it’s really about trying to shed light on the darkness and the positivity in the city.”

Waithe contends that a lot of Chicago-set TV shows and movies are told from an outsiders’ perspective. Amidst the divisions, corruption, and violence, Waithe sees people going about their lives.

“You see stories of people in Chicago, and it’s a perspective from people who aren’t brown or haven’t lived there,” Waithe said. “I think Chicago is really commodified, particularly by major networks and certain TV shows because it’s just a backdrop. I think they try to use it as a way to be important, or tell a story that needs to be told. For me, I just want to tell a story of the people that live there. Not the people that police them, not the dark stories all the time — just the human stories. That’s my goal.”

Waithe even holds herself accountable for not going far enough in Season 1 to capture the city in full. “I felt like it could’ve been more authentic, it could’ve been more rooted,” she said. “But we kind of had to figure our shit out, and we tried to figure it out for Season 2 by being more authentic and actually shooting on the South Side of Chicago and not being afraid of going into certain areas.”

Just as it’s important for the people of Chicago to have a voice outside the city’s issues, Waithe said it means a lot to show real locations on screen. She hires directors who are eager to seek out new spots in Chicago, especially in neighborhoods that might intimidate.

“I think Chicago has a very cool, dual vantage point,” Flynn said. “One, it’s a lot like all American cities: It has the same sort of baked-in problems, like race, corruption, and education. At the same time, Chicago is so incredibly unique and is one of the most visually fascinating cities in the world. And it’s so underused. It’s criminally underused.”

McQueen agreed, saying “I think it’s always important to tell Chicago stories. I’m surprised there’s not been more. […] It’s indicative of what’s going on in the world at large. You’re taking a local and making it global.”

This Article is related to: Film and tagged Steve McQueen, The Chi, Widows