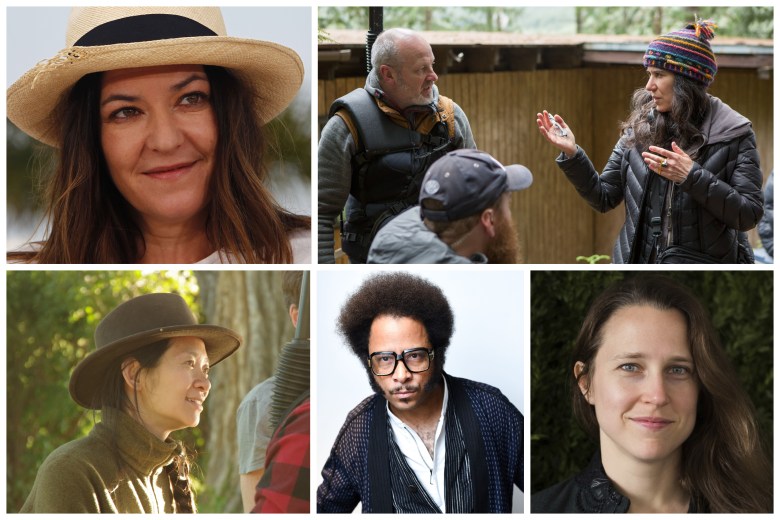 This week on the Filmmaker Toolkit podcast, we sat down with directors who made smaller films that don’t have big awards campaigns but whose work should be remembered among the year’s best films.

Here’s a taste of the wisdom and insight each director shared about their filmmaking process.

Lynne Ramsay On Bouncing Back

In the winter of 2013-14, Lynne Ramsay disappeared to the Greek Island of Santorini to seek refuge after the traumatic experience of having to quit “Jane Got a Gun” right as production began, having concluded the producers would never let her make her version of the film she’d worked on for years.

“I found it quite peaceful and I could get quite focused, perhaps because I thought I was going to make a film and I didn’t and that was really painful,” said Ramsay. “I made the film in [my] head, I learned so much and in a way it informed this. There was a lot of fury, there was a real pitch to make something really special and take the good stuff from a painful experience.”

Ramsay got to work on adapting Jonathan Ames’ “You Were Never Really Here,” a script Joaquin Phoenix fell in love with and was rushed into production when a hole in his schedule opened.

“You get plunked in New York after writing the script in a village with no cars in Greece and you’re off the grid and close you eyes and hear the elevated train, you think, ‘This is the sound of madness,’” said Ramsay.

That disorientation became the driving force of how Ramsay tried to capture the internal state of her new protagonist, Joe (Phoenix), a PTSD combat veteran-turned-hitman. The pieces fell together one rare quiet night in the backyard of her Brooklyn rental.

“It was pitch black and I could hear all these explosions,” said Ramsay. “And I’m like, ‘What the hell is that?’ I thought I was going crazy, but it was actually the Fourth of July and I couldn’t see the fireworks.” Ramsay recorded the sound of the fireworks and played it for Joaquin Phoenix, whom she told, “This is what goes on in your head every day.’”

“Sorry To Bother You” is a deeply political film and its writer/director Boots Riley has a very clear view of how society’s problems stem from a capitalist economic system that feeds off working-class labor. Yet, the film itself has a crazy energy, a sharp sense of humor, and a cinematic playfulness that avoids the pitfalls of a “message” film.

“The certain preachiness that comes when [artists] assume that they’re Jesus,” said Riley. “Because sometimes artists have relegated themselves to the point where, ‘I’m just exposing the ideas.’ Like Detroit (Tessa Thompson) says in the movie, ‘Exposing the bullshit.’ And if that’s all you’re there to do, you don’t have much of a job because most of us know what the bullshit is.”

Riley said one way he avoids this trap by making a simple assumption about his audience.

“I’m assuming you are already agree with me, as opposed to, ‘I’m important because I’m showing you this new thing that you never thought about,'” said Riley. “It changes the voice a lot: ‘You already know what’s wrong, you the viewer, and here is the way we can change it.’ And I never assume my viewer ever disagrees with me.”

Zhao’s breakout second feature film, “The Rider,” is based on the real life of the film’s star Brady Jandreau — a young rodeo rider who, after suffering a massive brain injury while competing, faces an existential crisis about his place in this world. While on the podcast, Zhao talked about seeing something in Jandreau that made her think he would be a dynamic presence that could anchor a film.

“I saw the way he was training horses, and that kind of sharp focus to able to be completely present with an animal who was being distracted,” said Zhao. “To be able to communicate with them to get their trust is the type of presence I was looking for in professionals and non-professionals. To be on set and give me those spontaneous moments because they are completely present and not think about a script or anything. And I thought if you could do that to a horse, that’s wild, maybe you could do it to other people and the audience.”

Zhao believes that with how many actors training and going to school to study their craft before being discovered, movies have lost something from their past.

“[So many] people are trying to get into it,” said Zhao. “But there was a time when some of our greatest actors were discovered like Brady.”

The newly crowned best director of 2018 by the LA Film Critics Association, Debra Granik came on the podcast to talk about the enormous amount of documentary research that went into her script for “Leave No Trace.”

For a self-identified social realist director like Granik, the lines between nonfiction and fiction are often blurred, and in some cases a film can actually jump the line completely. A few years ago, Granik and her writing partner Anne Rosellini were handed a script about the struggle ex-convicts have in re-entering society.

“There was an ending, written by a particular screenwriter, and we couldn’t make it work,” said Granik. “I don’t want to be involved with a script where the person goes back inside [prison]. I’m curious about the people who got out and they stayed out. I want to hear about re-entry, not recidivism. And so then we said, ‘We better continue with the documentary research. That’s where we’re hearing the more nuanced part of the story.’”

Soon Granik started to find men  willing to share their stories of how society closes its doors after one exits prison. And much like Granik’s 2014 documentary “Stray Dog,” her research subject soon became the subject of a nonfiction film. After three years of filming, Granik is now in post-production of the documentary.

Ironically, the other project Granik and Rosellini are working on is turning Barbara Ehrenreich’s “Nickel and Dimed,” a nonfiction account of the author’s personal exploration of the difficulties faced by low-wage workers, into a narrative script with fictional characters based on Ehrenreich’s experience.

Josephine Decker created “Madeline’s Madeline” through the practices of a improvisational theater group that conceives story through movement.

“To some degree [movement] is the language I understand better than [actual] language,” said Decker. “I didn’t really speak when I was a child. I was really, really shy. I had one friend I would talk to when I was going through elementary school and otherwise I didn’t speak anyone, except the teacher. But I started dancing when I was four and I think I got to be my whole self. I got to be me through dance, and also I think when you start learning that young, I’m just so grateful for it, because it gives you all these instincts about movement and context.”

With her next film, “Shirley,” which Decker shot this fall and is currently editing, she went out of her comfort zone with  a dialogue- and plot-driven script written by “I Love Dick” author Sarah Gubbins. Decker struggled in adjusting to a different type of filmmaking, but she eventually had a breakthrough rehearsing with her cast, which includes Elisabeth Moss and Michael Stuhlbarg.

“It was so exciting to realize dialogue is music that you set to dance, which is movement or the blocking,” said Decker. “In a scene that has three actors, if they have a long conversation, how do you break it up? How does one get pulled away for awhile? How do you create the tension of that person needing to come back? It was really exciting to realize, even though I didn’t think that was a tool I had, these other tools from a whole other realm of life, movement and music, have helped me with film.”

As part of the same conversation, Decker revealed that she and actress Zosia Mamet are developing a horror film together that would be “movement-based horror.”