Emily Blunt is spectacular, but the dull "Mary Poppins Returns" is too high on nostalgia, and too low on imagination. 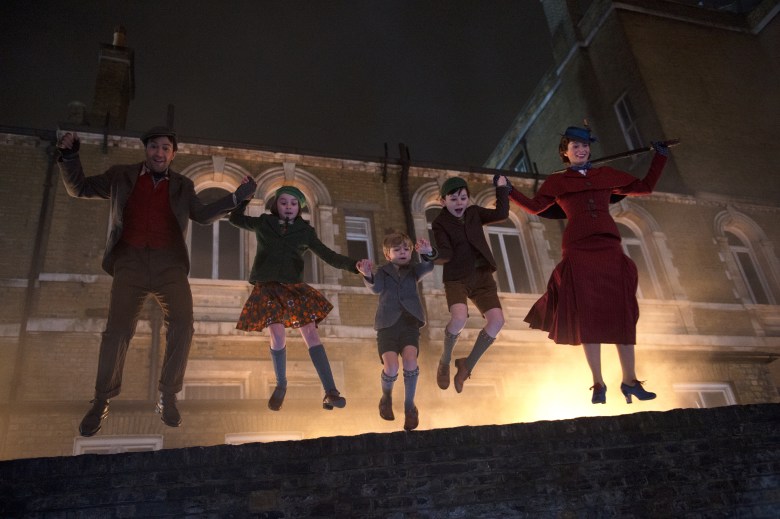 A listless Sunday afternoon of a movie that bursts with forced whimsy and synthetic optimism from the first notes of “(Underneath the) Lovely London Sky” to the last twinkles of “Nowhere to Go but Up” (an admirably bold choice of song title for any film’s big closing number), “Mary Poppins Returns” isn’t dishonest so much as it’s out of its time, like a useless clock that’s happy to be five minutes off. In fact, that analogy is something of a plot point in this long-awaited Disney sequel, which — after its daytime lullaby of an opening number — begins with the grizzled Admiral Boom (David Warner) complaining that Big Ben is running a few ticks ahead of schedule. Of course, the truth of the matter is that the crotchety old naval vet is actually lagging behind, but this is a film that would rather slow down the rest of the world than speed up to join it.

Such is the stubborn and elusive charm of Rob Marshall’s sleepy rehash, a feature-length anachronism that feels like a meandering stroll compared to the manic sprints of others family movies these days. A generation of kids raised on Minions is about to be bored into submission, and they’ll be all the better for it. And yet, however refreshing the plotlessness and relative purity of “Mary Poppins Returns” might be, there’s a fine line between “nostalgic” and “out of touch” — between revisiting the past and living in denial of the present.

There’s nothing wrong with telling kids to see the bright side of life, but this half-hearted throwback doesn’t offer many compelling reasons why they should. For a movie that so insistently celebrates the power of imagination, Marshall’s latest puts little of its own on display. For a movie about the pleasure of seeing things from a new perspective, it only works when it retreads familiar ground. And for a movie about the joy of escapism, “Mary Poppins Returns” seldom gives you anywhere to go.

First conceived by author P.L. Travers, Mary Poppins is a cyclical phenomenon who returns when people need her most. While her second film has been in the works for several decades, she couldn’t have come back at a better time — either for audiences, or for the surviving members of the Banks family. Set in London between the great wars, Marshall’s sequel picks up a full generation after the original left off, with siblings Jane and Michael having matured into Emily Mortimer and Ben Whishaw, respectively (Whishaw in particular is wonderfully soulful, though echoes of the “Paddington” franchise do this lesser property no favors). She’s a political activist who’s protesting against an ill-defined cause, and he’s a fragile artist who’s been forced to take a teller job at the Fidelity Fiduciary Bank after the death of his wife left him the sole provider for their three children (Pixie Davies, Nathanael Saleh, and Joel Dawson).

But things don’t get really grim for Michael until repo agents drop by to announce that he’s behind on his payments for the family house on Cherry Tree Lane, and that they’ll be reclaiming the property in five days if he can’t scrounge up the money. If only Michael hadn’t misplaced those valuable bank notes! But then, just when all hope seems lost, a familiar silhouette floats down from the clouds and promises to look after the little Banks’ while Michael deals with the bigger one (childcare appears to work a bit differently in the U.K.).

Why, it’s Mary Poppins, of course, and she hasn’t aged a day! Talking parrot umbrella, smart red bowtie, a stern but enchanted approach to daily chores… the only thing that’s changed about the character is the actress playing her. But while the part only requires Emily Blunt to channel the spirit of Julie Andrews’ performance — once again, the eponymous nanny lacks a clearly defined character arc, and all but blends into the background during the second half of the film — the “Edge of Tomorrow” star can’t help but overachieve. Not only does she capture Andrews’ careful balance between severity and playfulness, but she constantly wobbles the scales in a way that adds tension to a movie that never manages to mine any from its plot, or from any of the mediocre songs that punctuate it. 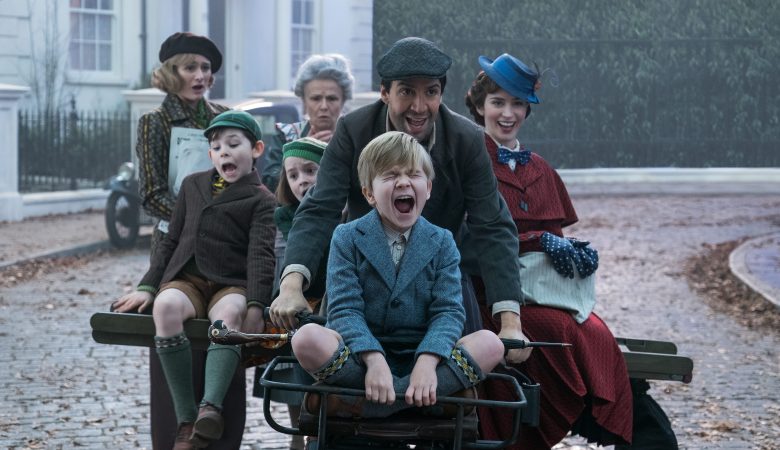 The original “Mary Poppins,” for all its appeal, isn’t a work of musical genius. Earworms like “Supercalifragilisticexpialidocious” and “Let’s Go Fly a Kite” might have trickled down from one generation to the next, but even the most cursed afflictions can be hereditary. Still, “Mary Poppins Returns” manages to shimmy under the low bar set by its predecessor. While composer Marc Shaiman (who co-wrote the lyrics with Scott Wittman) does a note-perfect job of recapturing the general Poppins vibe, there isn’t a memorable tune in the bunch; for better or worse, you won’t be haunted by these songs.

“Hamilton” maestro Lin Manuel-Miranda — playing a cockney lamplighter in an amiably goofy performance that only makes sense as a tribute to Dick Van Dyke — provides enough personality to salvage the opening number, but “Trip a Little Light Fantastic” is a headache waiting to happen (because Miranda is so capable of genius, he may always be held to a higher standard, even when singing other people’s songs). Marshall at least gets a chance to trot out some of his kinetic choreography, but the dance moves fail to compensate for his flat direction. Blunt pours every ounce of her character into each would-be showstopper, and “The Place Where Lost Things Go” might prove to be a genuinely invaluable help to grieving children, but even they might struggle to remember how it goes. It doesn’t help that Marshall drowns “Can You Imagine That?” in a flood of CGI that snuffs out the old-timey aura in favor of some blue plastic newness.

Worst of all might be the cacophony that accompanies Meryl Streep’s one-scene cameo as Mary Poppins’ eccentric cousin, Topsy, a character who seems to have been cut out of Tim Burton’s “Alice in Wonderland” for being too much. Her big, clattering number epitomizes the story’s insistence that every setback can be turned on its head, but “Mary Poppins Returns” is too baldly instructive to ring true. The movie is ruled by magical thinking, as David Magee’s script eschews any connection between cause and effect in favor of telling kids to chin up and wait for a miracle. Imagination is posited as a healing force — there’s a lovely moment in the first act when Michael quite literally makes his kids some money — but the story is too much of a retread to follow through on that idea. 54 years from now, “Mary Poppins Rises” will no doubt put audiences through the same paces when it revisits the Banks family in the swinging ’60s. While Disney was able to make this same trick work when “The Force Awakens” retraced the footsteps of “A New Hope,” that film was about how stories reverberate throughout the ages; here, it just feels lazy.

Tellingly, the best things about “Mary Poppins Returns” are either familiar, or on the verge of being forgotten. Almost worth the price of admission unto itself, the film’s standout sequence finds the whole gang diving inside a broken ceramic bowl, where they enter a cartoon circus that combines live-action with the traditional 2D animation for which the Mouse House was once famous. Employing over 70 animators who specialize in the dying technique, the 10-minute stretch is every bit as vital and alive with detail as the Disney classics of yore; it’s gorgeous stuff, and a bitter testament to the feeling that real art is something that Hollywood used to make, and now merely remembers at our expense. Mary Poppins may steel the Banks children for the future, but her perfunctory new adventure only leaves us wishing to return to the way things were.