Nothing can rain on Richard E. Grant's parade today. 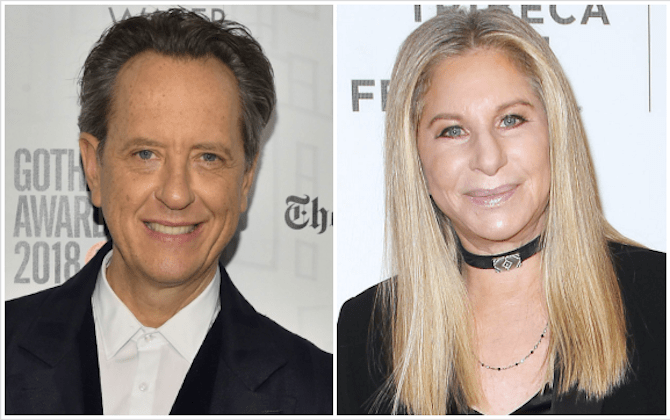 Do you hear that? That’s the sound of Oscar nominee Richard E. Grant singing “Barbra Streisand, Barbra Streisand. What a beautiful, beautiful name.” The “Can You Ever Forgive Me?” actor recently posted an adorable fan letter to twitter that he wrote to Streisand in 1971, when he was just 14 years old and three years after the release of “Funny Girl.”

“Dear Barbra Streisand,” Grant’s letter begins. “You don’t know me yet, but I am writing to offer you an idea you might like to consider.” He then goes on to explain that he lives in a “small African Kingdom called Swaziland,” and that he and his family have been very big fans of hers since seeing “Funny Girl.”

“I read in the paper that you were feeling very tired and pressurized by your fame and failed romance with Mr. Ryan O’Neal,” he writes with the sensitivity only a 14-year-old boy could muster. “I would like to offer a two-week holiday, or longer, at our house, which is very beautiful and with a magnificent view of the Ezulwini Valley.”

“Here you can rest. No one will trouble you,” he explains, adding that “not that many people will know who you are” as her films only play for three days in one cinema. He signs off: “Please consider this respite seriously. You will always be welcome. Your sincerely, and in anticipation of a hasty reply.” He closes his letter with a P.S., twice quoting William Shakespeare.

As a lifelong fan of someone you’ll understand what it meant for me to take this snap outside the home of @BarbraStreisand Asked Security for permission & he replied ‘It’s a public road, but thanks for asking’ Wrote her this letter when I was 14. My wife is very understanding! pic.twitter.com/3SohXKpgZT

Not exactly the hasty reply 14-year-old Grant was hoping for, but after nearly 50 years, little Richard has finally received a response that is sure to knock him off his feet.

Tweeting with a grammatical style not unlike Cher’s Twitter punctuation, Streisand wrote: “Dear Richard What a wonderful letter you wrote me when u were 14 ! and look at u now! You’re terrific in your latest movie with Melissa congratulations and love Barbra.”

Dear Richard What a wonderful letter you wrote me when u were 14 ! and look at u now! You’re terrific in your latest movie with Melissa congratulations and love Barbra

And here is Grant hearing Streisand’s response read over the phone to him by his daughter (dreams really do come true!):

My pal Nicole Wilcox took this photo as my daughter read me @BarbraStreisand ‘s tweet/response to a letter I sent her 47 yrs ago. Am completely crinkle faced & overcome with emotion. My ‘Message in a bottle’ miracle. 😭😍😇 pic.twitter.com/bJMko098we

Grant received his first Academy Award nomination this year. He will compete for Best Supporting Actor for his performance as rakish huckster Jack Hock in Marielle Heller’s “Can You Ever Forgive Me?” opposite Melissa McCarthy. Streisand has two Oscars, and she has directed three feature films which received a total number of 14 nominations.

This Article is related to: Film and tagged Barbra Streisand, Richard E. Grant