TCA: The new Showtime drama is about an FBI agent hunting down Charlestown bank robbers, but it's an extension of "The Town," not a copy of it. 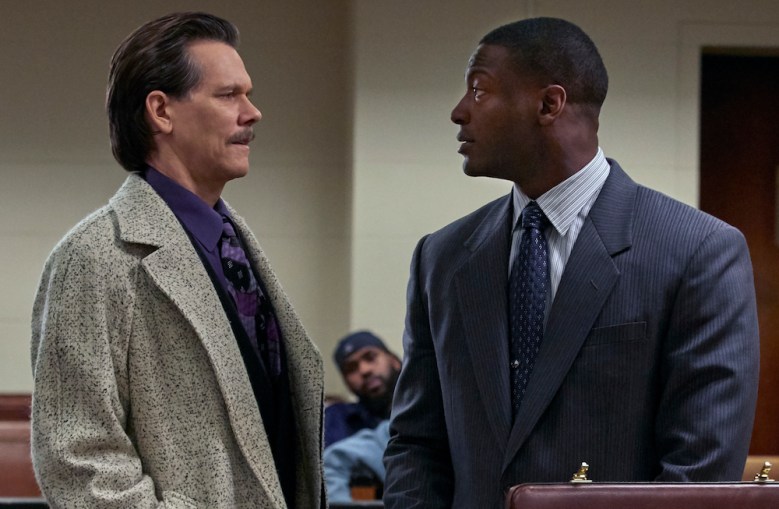 Kevin Bacon and Aldis Hodge in “City on a Hill”

When the cast and producers of “City on a Hill” took the stage Thursday morning, they had only shot the pilot of their upcoming Showtime drama. The group was getting ready to fly to New York to start production the next day, so much of the conversation focused on what they hope to accomplish with the new series. But one thing they know already: It’s going to be cold.

“When your face gets that cold, you start to slur your words,” Kevin Bacon said.

“That’s because your body is preparing for death,” Aldis Hodge added.

Temperature alone isn’t enough to set the series apart from so many Boston-set crime stories of the past. “The Town,” “Mystic River,” “Gone Baby Gone,” and more all featured plenty of wicked cold scenes, and “City on a Hill” shares a few more things in common with this popular subgenre.

Fellow star Jonathan Tucker admitted there are similarities, while noting what makes this series so exciting.

“It’s a very gritty, very violent, very visceral story,” Tucker said. “[But] we’re getting to see some of the stories you’ve referenced expanded, in some respects. We get to see the characters develop [over 10 hours or more], which for us as actors is thrilling.”

Created by Chuck MacLean, based on an idea by famous townie Ben Affleck, “City on a Hill” takes place during the early 1990s, when the city was rife with criminals and emboldened by local law enforcement agencies in which corruption and racism was the norm. The first season tracks assistant district attorney Decourcy Ward (Hodge) as he forms an unlikely alliance with a corrupt yet venerated FBI veteran, Jackie Rohr (Bacon). Together, they take on a family of armored car robbers from Charlestown (led by Tucker) in a case that grows to involve, and ultimately subvert, the entire criminal justice system of Boston.

“I’m sure there are overlaps with all kinds of crime stories,” producer Tom Fontana said. “The dance between [the two leads] goes on for the entire season. Hopefully, at any given moment, you’re not sure who’s winning and who’s using who and for what reasons. We’re trying to have these two characters try to figure each other out and maintain a sense of themselves. It’s a mixed evolution on both their parts.”

Joining Affleck in the producing chair is friend and devout Bostonite Matt Damon, who knows a thing or two about the city’s history of great crime dramas, having starred in the Oscar-winning “The Departed.” Bacon said he also drew inspiration from director Martin Scorsese’s work, albeit earlier in his career.

“The thing I loved immediately from reading the pilot was Jackie’s voice,” Bacon said about his corrupt FBI character. “This world of ’90s cops and robbers had a gritty vibe to me and was reminiscent of movies I loved in the ‘70s from Scorsese and Sidney Lumet and I felt there wasn’t much on TV in this pocket — there was nothing that felt like this.”

“City on a Hill” marks a reunion for Bacon and Tucker, who shot the ’90s film “Sleepers” together — when Bacon was 37 and Tucker was 12. Tucker, being from Boston, feels a deep attachment to the project, but admitted researching the part divulged good and bad memories about his hometown.

“When you dig into your backyard, you find all these things that are so familiar,” Tucker said. “But you also find things that don’t feel so good. It’s great to be telling a story about Boston. It’s critical to me that it’s not dishonored, and we really give our due to a city that’s an important part of my life.”

“City on a Hill” is set during the highest murder rate in Boston’s 360-year history. Over the next decade, because of the efforts depicted in the series, that rate lowered by 80 percent.

“The Boston Miracle was a very real thing,” Fontana said. “Lives were saved as a result. That being said, getting there was not a yellow brick road.”

This Article is related to: Television and tagged City on a Hill, Kevin Bacon, TCA