On the eve of the Sundance premiere for "Fighting With My Family," Johnson reflected on his unique career trajectory, and why he's keeping his options open for the future. 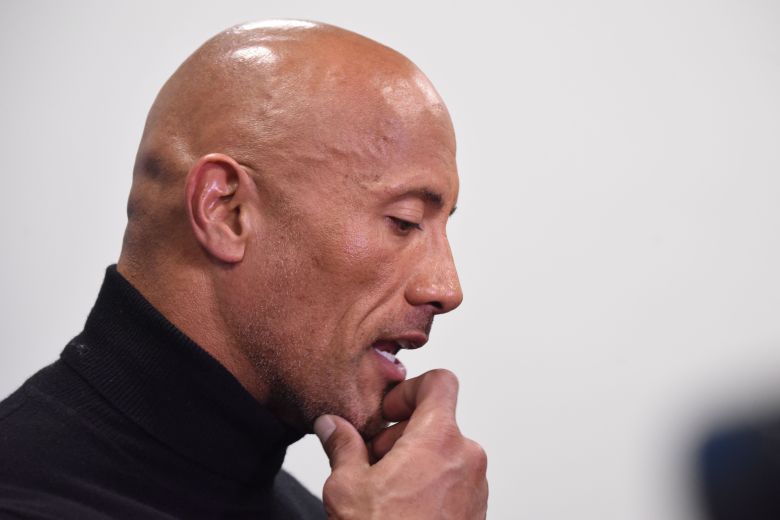 Dwayne Johnson at the “Fighting With My Family” Sundance premiere

In 2018, Dwayne Johnson starred in global blockbusters “Rampage” and “Skyscraper,” which collectively made around $734 million worldwide, but he spent most of the year watching documentaries.

“I’ve been on this tear lately,” he said in an interview at the Sundance Film Festival. “There’s some outstanding filmmakers making these really provocative documentaries, and when you watch a film through their perspective, you realize there’s something bigger there.” His favorite was current Oscar nominee “Free Solo,” and he’s been intrigued by the notion of enlisting non-fiction directors for narrative projects. “It’s been a lot of fun, finding those,” he said.

Despite his massive commercial enterprises, Johnson’s latest venture points to a tantalizing interest in movies made beyond the studio system. “I always say that the audience is my only boss, other than my lady at home,” he said. “When you have movies that feel like they fit outside of the studio system, but then also feel like they have a shot with audiences around the world, I would like to do them.”

Johnson was sitting in a small room on Main Street in Park City, where he attended Sundance as a producer. “Fighting With My Family,” a surprise addition to the lineup that he brought to fruition through his Seven Bucks Productions, adapts the 2012 television documentary about the British wrestling family that produced WWE fighter Saraya Knight (a feisty Florence Pugh); the project, which MGM releases next month, delivers an amusing inside look at the “Attitude Era” of the wrestling league, when Johnson first came to prominence as “The Rock” before he pivoted to movie stardom. 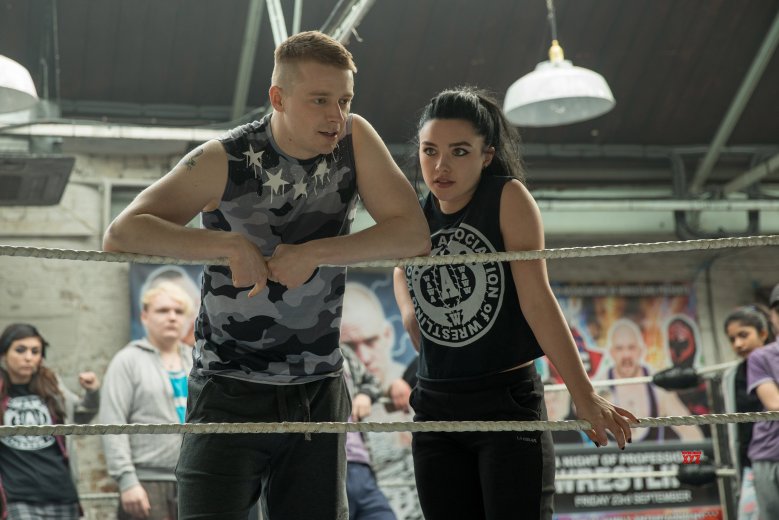 “Fighting With My Family”

At Sundance, the charismatic 46-year-old muscleman was in a relaxed mood, joined by his producing partners, ex-wife Dany Garcia and her brother Hiram. Dany pulled up a small chair for Johnson (“It’s good for your back”) before sitting down an adjacent bed, eating a salad. Her brother relaxed onto a pillow next to her. “The size of the project is not ever really a factor for us,” said Hiram, who began working for Johnson in his early days at WWE. “While this is an intimate story, it has a very universal appeal, which is like a lot of our current work.”

Johnson appears as himself in the movie, but it’s a smaller, sweet-natured alternative to the cacophonous spectacles that include the last five “Fast and Furious” movies. Yet Johnson and his team failed to garner interest in “Fighting With My Family” around Hollywood.

“Every studio passed,” Johnson said. “They were afraid of the content. They were afraid that it was pro-wrestling, and they were concerned that it was a small British comedy of a family who was very likable — but also not particularly famous, from a very small working-class town in England.” Johnson even told executives he would appear in the movie, to no avail. “I’m a lucky son of a bitch to be in the position that I am, and we’re very lucky as a company to have had the success we’ve had,” he said. “But at the end of the day, that didn’t mean shit when it came down to whether the studios wanted to invest or not.”

Instead, Seven Bucks turned to independent support from Kevin Misher, who produced Johnson’s 2002 big screen debut “The Scorpion King,” as well as British financier Film4, the original investor in “The Favourite.” Ultimately, Johnson said, the movie came together for a little over $10 million. MGM acquired domestic rights in post-production.

The endearing end result suggests an alternate side to Johnson’s movie stardom, and opens up the question of why he hasn’t pursued more personal projects on a similar scale. “Risk taking falls into various categories,” said Dany Garcia, who co-founded Seven Bucks with Johnson in 2012. “There’s the risk taking of doing a $200 million movie, which is a lot of risk, compared to doing something more intimate that appears to be off brand but really is the brand with just a different quality. We really can do everything, as long as it’s entertaining and done well.” 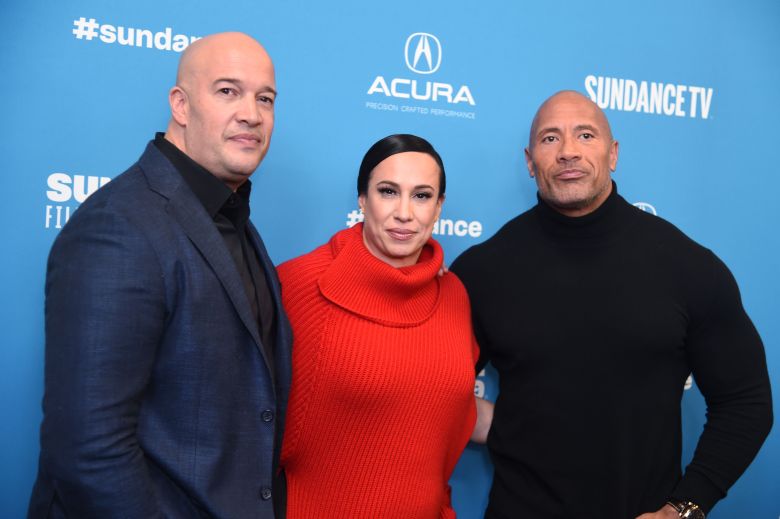 Nevertheless, Johnson remains fixated on large-scale popcorn movies. He recently wrapped production on “Fast and Furious” spinoff “Hobbs and Shaw,” begins production on a “Jumanji” sequel in two weeks, and then he’ll star as an Interpol agent in “Red Notice” opposite Gal Gadot.

From there, however, he has intriguing plans with the potential for a more complex range of performances that include “The King,” Robert Zemekis’ historical drama about Hawaiian King Kamehameha; Netflix’s “John Henry and the Statesmen,” in which Johnson will play the eponymous American folklore character; and the standalone DC superhero movie “Black Adam.” Unlike the “Fast and Furious” movies, Johnson has producing credits on all of them.

“These are big commercial movies that have a real shot at entertaining people around the world, which is always the goal,” he said. “I think that was in my DNA from just being in the ring for so long. It was such an intimate world where I sat this close to the audience, so it was always audience-first.”

While he’s diplomatic about explaining his motives, Johnson turned away from the more adventurous, small-scale productions that he gambled on during his first decade of moviemaking. While he continues to anchor HBO’s NFL drama “Ballers,” nothing in his recent filmography shows a willingness to return to the dicier prospects of his 2006 efforts, a year that remains the biggest outlier in his career.

That was when he starred in both the juvenile detention center drama “Gridiron Gang” and “Southland Tales,” an infamous dud. Richard Kelly’s anticipated followup to “Donnie Darko” was a pop-fever dream set in the near future, satirizing reality-show stars and surveillance society, with potent themes that look downright prescient a decade later. However, the movie was rushed into competition at the Cannes Film Festival, where it was instantly savaged.

“‘Southland Tales’ hurt,” said Johnson, who has rarely discussed the reception of the project. “I took it in the gut. We all went into that movie having so much trust, and a script that was complex and interesting. At times, you’re like, ‘What the fuck is going on?’ Richard Kelly, who was a good friend, was so passionate about that movie.”

The Cannes press conference, which took place moments after a press screening dominated by walkouts, was an awkward affair. “It was tough because we went all the way over there and we were shrouded in mystery,” Johnson said. “We were the movie that everyone wanted to see, but we had no business being at Cannes, because it was unfinished.”

Dany Garcia piped in. “I wasn’t in charge at that time!” she said. (Kelly later re-edited the movie for its theatrical release, when it grossed a paltry $374,743.)

Johnson stared at the ground. “When the screening ended, we were all on our Blackberries at that time, and our publicists were, like, sweating,” he said. “We had to walk from there directly to our press conference. We sit down in the press conference and someone was like, ‘They fucking hated the movie. So just be prepared.’ But we had to be there for another three hours. So we sit down and the first question, I’ll never forget, is a journalist standing up and saying, ‘I’ve got to be honest with you, I’ve never seen so many people walking out of a movie. What was it about this movie?’”

He sighed. “Over the years, and with experience, I’ve learned to lead with a neutral mind,” he said. “I’m a human being. If you read 20 awesome things and one guy says you suck, you’re like ‘Wait!’ Earlier in my career, I had a hard time beating that.”

To those of us who actually found much to appreciate about “Southland Tales,” and the prospects of a pop-culture figure like The Rock turning his image inside out, the idea that “Southland Tales” somehow scared Johnson away from bolder choices registers as a disappointment. His character, amnesiac action star Boxer Santos — who may or may not usher in the apocalypse — speaks volumes about the hubris involved in committing to stardom at all costs. “I’m a pimp,” Boxer says in a memorable scene, “and pimps don’t commit suicide.”

But Johnson’s biggest career transition, from the boisterous circus of scripted wrestling matches to the center of the Hollywood machine, has largely unfolded as an organic process. These days, he projects the confidence of a self-made studio executive, and attributes his WWE years to helping him come to grips with the blend of artistic and practical challenges of the entertainment industry.

“Wrestling and boxing at that time were leading the charge in terms of pay-per-view,” Johnson said. “By ’97, ’98, we were competing with the NFL in terms of ratings. We were doing a lot of cool camera shots leading the wrestlers in from backstage, which was eventually adopted by NBA and NFL.” 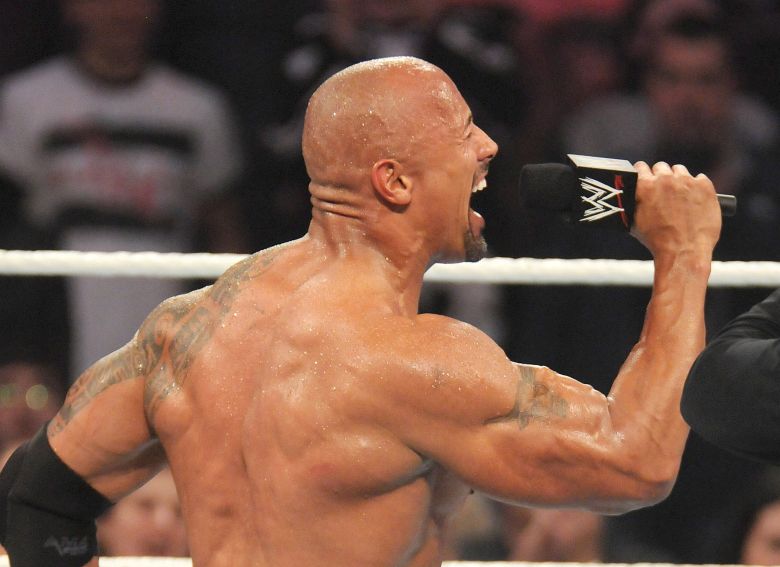 The writing process gave him room to experiment and fair degree of autonomy, working alongside WWE writer Brian Gewirtz, who now serves as the senior VP of development for Seven Bucks. “Man, we were not a publicly traded company at that time, and the shit that we were able to get away with saying,” Johnson said. He clasped his massive palms together and the noise ricocheted off the walls. “It’s mind-boggling, when you think about it. There was nothing we can think of in our fucked-up brains that we can’t go out and say in a creative, entertaining way.”

These include an untitled ‘70s-set drama about the passage of anti-sex discrimination law Title IX. “It’ll be considered smaller budget, but it’s a very big story, and a story that we feel will resonate,” Hiram Garcia said. “Title IX is under attack right now, so it’s very relevant.”

Johnson and his company are repped by WME, which helps them sort through potential collaborators. “We actually see a lot that comes through,” Dany Garcia said, crediting WME agent Kimberly Bialek with combing through possibilities. “She does a lot of work looking for these young filmmakers.” They continue to develop documentary projects, like 2017’s “Rock and a Hard Place,” an HBO production about a prison rehabilitation program.

Johnson, who has yet to rule out a potential move into politics further down the line, said he was optimistic about the future as he approached middle age. “I do feel that there’s a nice shift happening in my life,” he said. “More and more projects are coming my way, whether that means we’re attracting them or studios are actually seeing me in a different light of what I’d made 10 years ago.” He chuckled. “A lot of that is to say it’s so fucking cool to be here at Sundance with this little movie.”

This Article is related to: Film and tagged Dwayne Johnson, Fighting With My Family, Sundance