Familiar horror tropes and a well-trod storyline get livened up, thanks to an appealing cast and some mind-bending puzzles. 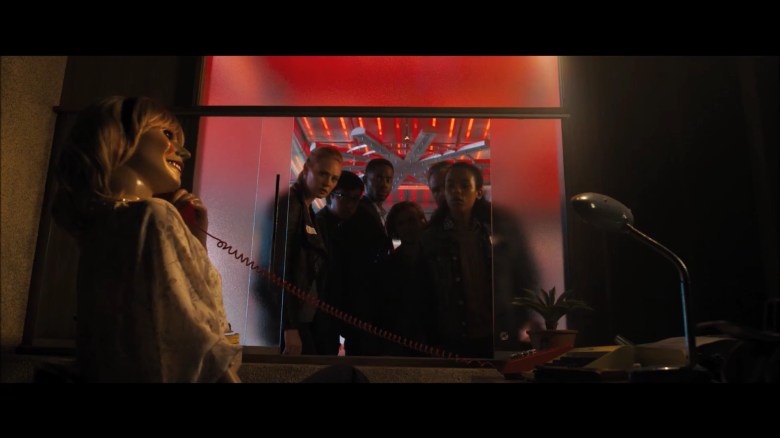 Long before puzzle hounds and adrenaline junkies were spending their own money and time solving real-world escape rooms, the horror space was dramatizing it on the big screen. From the obvious — the “Cube” cult favorites, the still-spinning “Saw” franchise — to enduring classics like, well, just about any haunted house film worth its screams, movies about overcoming terror with logic have always been a staple of the genre. Now that people can experience the madness of escape rooms for themselves, it’s only fitting that the film industry has taken note and churned out its own thriller about said rooms — entitled simply “Escape Room.”

This isn’t the first horror movie of its type: Not to be confused with 2017’s “Escape Room,” which also centered on the eponymous experience veering out of control, or last year’s “No Escape Room,” which added a supernatural twist to the same general scenario, Adam Robitel’s “Escape Room” follows a group of strangers trapped in a devilishly clever series of escape rooms that will kill them if they don’t solve puzzles fast enough. So, yes, it’s a been-there, done-that (and recently!) kind of plot, but livened up with an engaging cast and some genuinely clever puzzles, Robitel’s followup to “Insidious: The Last Key” has enough smart scares to keep it pumping for at least the first hour of its 100-minute running time. After that, however, it’s beholden to the kind of genre contraptions that prove even tougher to escape than a well-crafted…well, you know.

Robitel kicks into high gear early on, opting to open the film in medias res, with a breathless Ben (Logan Miller) attempting to navigate his way out what appears to be a finely appointed library. As an already-wounded Ben tries to get the hell out of a room growing literally smaller by the second, “Escape Room” makes it clear: These aren’t your regular escape rooms; these escape rooms want to murder you. The abrupt opening has an obvious function — why not get to the scary stuff first? — but it dilutes the chills to come, not only by teasing that things are going to go haywire and there will likely only be one final person standing, but explicitly showing it. Further twists are inevitable, but the thin explanations issued late in “Escape Room” are hardly revelatory enough to justify such a cheap prologue.

At least there’s a juicy middle. Flashing back to three days prior, Bragi F. Schut and Maria Melnik’s script introduces a trio of the film’s central players, different people about to be bonded together by a oddball adventure. Ben is a sad-eyed grocery store stock guy, while Zoey (“Lost in Space” breakout Taylor Russell) is a whipsmart college student afraid to stand out and Jason (Jay Ellis) is a hotshot finance dude who seems to have it made. Each of them receives a crafty box from a trusted relation, which eventually pops open to reveal an invite to a very exclusive escape room. The reasons why the trio — who are soon joined by three other potential escapees, none of whom get the same introductory period for reasons unknown — opt into the experience are as varied as their personalities, but the deal is sweetened by the promise of a major cash reward, should they escape. (This will later wind up meaning absolutely nothing.)

As they’re together in a waiting room at an imposing Chicago high-rise, two things soon become clear: the waiting room isn’t just a waiting room, and each of these apparent strangers has contended with previous traumas. Robitel’s cast of characters is made up of plenty of stock types, like Tyler Labine’s dad-joking blue collar guy Mike and Nik Dodani’s video game geek Danny, but there are some surprises lurking too, from Deborah Ann Woll’s canny twist on the “strong female character” ideal and Russell’s ability to evolve Zoey in strange circumstances. The cast of familiar faces displays the kind of quick chemistry that elevates a film built around the weirdness of throwing unlikely pals together and forcing them to make it out the other side.

And then there are the rooms. The escape rooms that must be untangled would be daring and clever on their own, but Schut and Melnik’s screenplay builds in nods to each player’s own traumatic experiences, the full effect of which isn’t realized until much later in the film. Ostensibly built around common fears, like burning to death, freezing to death, or being dropped from a high height, each room contains enough puzzles and tricks to account for the film’s unnecessarily protracted running time. As claustrophobic and freaky as each room is — and they are those things, enough to let Robitel keep up the tension without resorting to cheap jump scares or needlessly gory injuries — they are so engaging that they prove hard to leave. From an outdoor-set cabin to a billiard bar turned on its head, the escape rooms of “Escape Room” are the film’s best asset, and a final sequence hints that there are plenty more where they came from. What would a modern horror film be without a shameless bid for sequels?

For all its of-the-moment charms, “Escape Room” can’t shake its more basic genre trappings, eventually giving itself over to tired and predictable revelations and flimsy twists. The film’s last 10 minutes will likely rank as some of the more puzzling put on film this year (yes, it’s early; yes, they’re that strange), and they feel both silly and tacked-on, as bids to move action forward when it’s already stalled out. The foundation of “Escape Room” is strong, but it’s those final touches that make it wobble.