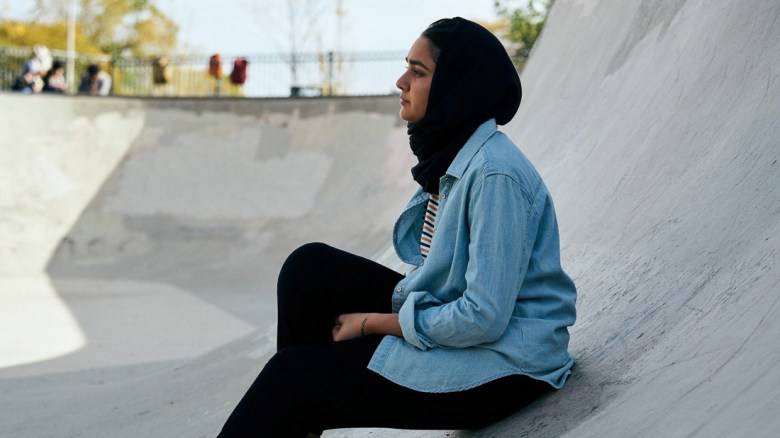 Minhal Baig’s semi-autobiographical “Hala” — a small but sensitively told coming-of-age drama about a teenage girl who’s struggling to reconcile the two sides of her hyphenated Pakistani-American identity — manages to establish its primary conflict in its opening two shots. The first is an image of an empty living room, as a disembodied voice sings a reverent Muslim prayer. The second peeks in on the film’s title character (Geraldine Viswanathan, who delivers an extraordinary, subdued performance that couldn’t be further removed from her hilarious work in “Blockers”), as she slumps inside the bathtub of her family’s Illinois home and masturbates with the furtiveness of a first-time shoplifter.

The only child of immigrant parents, Hala is stuck between two worlds that seem impossible to reconcile: One holy and abstract, the other profane and tangible. Each is real for her in its own way, and neither can be sacrificed without surrendering a crucial part of the person she’s becoming. Her mom (Purbi Joshi) and dad (Azad Khan) are living proof of that.

Eschewing the buoyant energy and/or blistering sarcasm that have shaped many of the best coming-of-age stories in recent years, “Hala” immediately settles into a more contemplative pace that cleaves much closer to the introspection of “Columbus” than the rat-a-tat energy of “Lady Bird” or even “Edge of Seventeen.” This is a persistently quiet film; always human and alive, but also told with the solemnity of someone who knows they’re sending a ripple through a body of water that’s been still for thousands of years.

Hala’s father is a fluent English speaker with a high-powered job at a big law firm, and appears to be the more Americanized of her two parents — he’s the good cop of the family, and bonds with his daughter over the crossword puzzles they do together every morning — and yet he’s also a devout Muslim patriarch with decidedly conservative ideas about how men and women are supposed to behave. Hala’s mother, on the other hand, is strict and reserved. She only speaks in Urdu, and seldom appears to leave the house. It’s hard to imagine that either of them were ever any other way, or could be inspired to change.

For Hala, as for most children, her parents are static creatures, forever stuck in the roles they played when they came to this country. But when she discovers that her father is a hiding a huge secret, Hala begins to realize that people never really stop negotiating who they are. That’s the most wonderful and terrifying thing about growing up in a culture that ostensibly encourages you to be whatever you want.

Most of Baig’s film exists in the space between the two ends of her split identity, as it’s easier for Hala to feel like she’s neither Muslim nor American than it is for her to feel as though she’s both. The kid she has a crush on isn’t helping. His name is Jesse (“Palo Alto” graduate Jack Kilmer), he’s got a wave of blond hair, and he bonds with Hala over skateboarding and poetry (he’s better at one, much worse at the other). The scenes between them are strikingly natural, and shiver with the awkward intensity of first love. When things get physical, Baig’s steady camera refuses to romanticize what high school hook-ups are like, which reinforces Hala’s feeling that sex probably isn’t worth completely abandoning her family’s religion and all that comes with it.

The other man in her life is her handsome and inspiring English teacher, Mr. Lawrence (Gabriel Luna). There always has to be one. Baig’s script, so true and poised for much of the movie, strains to find the right water level for its peripheral adult characters (Anna Chlumsky plays another one, and the basic functionality of her part is soured by the bizarre nature of her scenes). Why do kids in high school movies always seem to know exactly where their teachers live? And why does this phenomenon mostly tend to pop up in good high school movies that have more on their minds than sex, drugs, and social media? It provides an effective shorthand for the desperate lack of safety and comfort that some teen girls feel in their own homes, and it makes a certain amount of sense in small-town stories, but it kind of strains belief in a Chicago suburb where most people don’t even know their own neighbors.

This is obviously a minor quibble, but it epitomizes the ways in which “Hala” struggles to be as graceful with its plot mechanics as it is with its protagonist. And yet, the way the gears turn in this film can also be extraordinarily moving. For one thing, Viswanathan is incredible; as much of a witness to her character’s situation as she is an active force in changing them, her performance is vulnerable and self-possessed in equal measure, and often at the same time; while Hala isn’t always sure how to consciously balance those energies in her own life, the actress playing her knows how it’s done.

But the most resonant aspect of Baig’s film is the relationship between Hala and her parents, and how naturally the girl’s affection for them switches over the course of this story. Her dad is demonized to a degree that’s less earned than it seems expedient, but the movie shines through the subtle, achingly beautiful ways in which Hala and her mom start to give each other strength. The strength to be their own women, and the strength to realize how that might only be possible if they do it together.

“Hala” premiered at the 2019 Sundance Film Festival. Apple will release it later this year.

This Article is related to: Film and tagged Apple, Hala, Reviews, Sundance