"Jussie, you are my son," Daniels said in an emotional video to the "Empire" actor, who was the victim of a racist, homophobic attack. 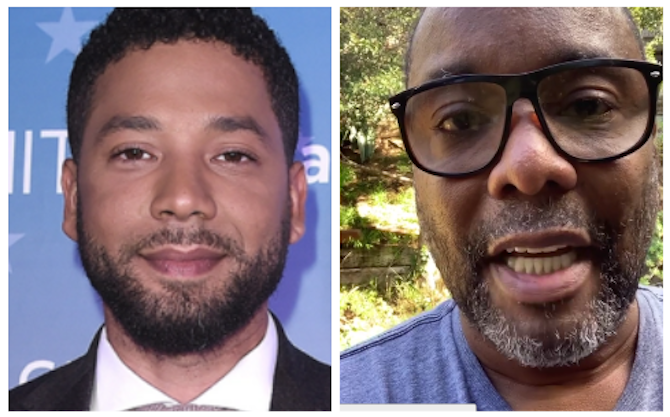 Hollywood was saddened and stunned to learn of a senseless attack on actor Jussie Smollett in Chicago on Tuesday. The “Empire” star was assaulted by two men who hurled racist and homophobic epithets, poured bleach on him, and tied a noose around his neck. The assailants reportedly yelled, “This is MAGA country.” Smollett is currently recovering at Northwestern Hospital and is in good condition — incredibly.

Smollett is best known for his role as out gay singer Jamal Lyon on ABC’s “Empire,” created by filmmaker Lee Daniels. Daniels, who is also gay, sent Smollett a powerful message of support in an emotional Instagram video. Calling the actor “my son,” Daniels said:

“You didn’t deserve, nor anybody deserves, to have a noose put around your neck. To have bleach thrown on you. To be called die f—, n—, or whatever they said to you. We are better than that. America is better than that. It starts at home. We have to love each other regardless of whatever sexual orientation we are. … and no racist fuck can come in and do the things they did to you. Hold your head up, Jussie. I’m with you, I’ll be there in a minute. It’s just another fucking day in America.”

Daniels isn’t the only entertainer to voice support for Smollett. Viola Davis wrote on Twitter, “We ALL have to take this racist and homophobic act of violence very personally! My arms are around you, Jussie Smollett.”

OMG!! THIS is why the LGBTQ community continue to fight to be seen and PROTECTED against hate!

We ALL have to take this racist and homophobic act of violence very personally! My arms are around you @jussiesmollett. You are loved! https://t.co/bprDZ3Luah

Lesbian television writer and producer Lena Waithe posted a photo of Smollett to Instagram, referencing Donald Glover’s song “This Is America” in her caption: “I stand with you Jussie Smollett. We all do. This is America. Unfortunately.”

Out gay actor Wilson Cruz wrote: “This will not go unanswered. When you attack one of us, you will answer to ALL OF US. Know that.”

Words fail, but know this, @JussieSmollett is our son, our brother and the word LOVE seems insufficient. We stand with you and pray for your speedy recovery. This will not go unanswered. When you attack one of us, you will answer to ALL OF US. Know that.

I am disgusted and horrified to hear of the homophobic and racial attack on Jussie Smollett last night. Unfortunately, these hateful attacks happen way too often. We must call out and hold those accountable. Sending love to you, Jussie.

Jussie Smollett was violently attacked by two white men who poured bleach on him and put a noose around his neck. He was targeted for being black and for being gay. THIS is why we have to have zero tolerance against homophobia and racism. Jussie’s life matters.

To those in Congress who don’t feel the urgency to pass our Anti-Lynching bill designating lynching as a federal hate crime– I urge you to pay attention. https://t.co/EwXFxl5f2m

The attack on Jussie Smollett, like all hate crimes, is an attempt to silence and intimidate marginalized people so we won’t demand equality. Attacks like this diminish everyone’s equality and civil rights. We have to fight the parts of our culture that make it seem ok.

The racist, homophobic attack on @JussieSmollett reminds us that crimes targeting people for the color of their skin and who they love still happen. We must stand united against this hateful violence. Sending Jussie love and prayers for a quick recovery. https://t.co/tPXc0LZvVm

The racist and homophobic attack on Jussie Smollett is a horrific instance of the surging hostility toward minorities around the country. We must come together to eradicate all forms of bigotry and violence. https://t.co/2accVEJrCG