The writer-director has no interest building a cinematic universe. 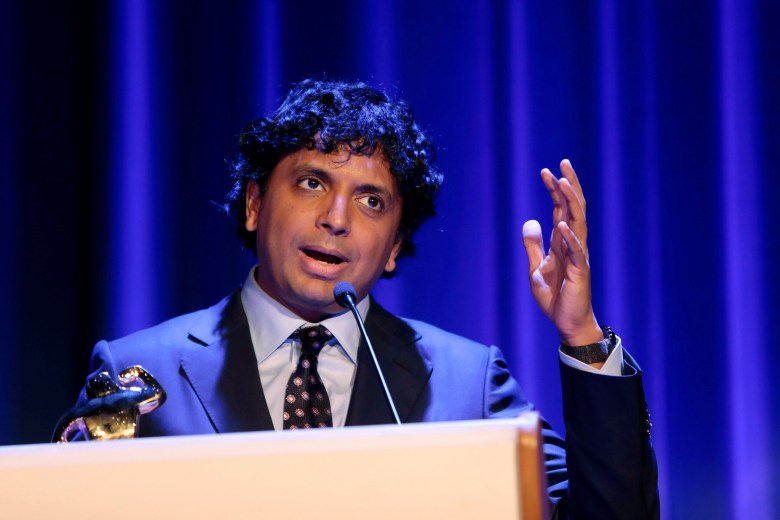 The release of “Glass” this month will close the book on an 18-year journey for writer-director M. Night Shyamalan. The 48-year-old director was following up the blockbuster success of “The Sixth Sense” when he released his original superhero origin story “Unbreakable” in theaters in 2000. Shyamalan always intended to create a franchise with the movie, and he confirmed to Vulture that he originally wrote James McAvoy’s “Split” character, the Horde, into his early draft of “Unbreakable.”

“Originally ‘Unbreakable’ and ‘Split’ were together,” Shyamalan said. “David and the Horde bump into each other at the train station, and David follows him.”

When asked why he decided to remove the Horde from “Unbreakable,” Shyamalan answered, “It’s a narrative issue. Whenever you raise the stakes, you can’t unraise them. So once you introduce girls being abducted, there’s a ticking clock that doesn’t allow for the breadth of character development that I wanted to do in ‘Unbreakable’ with David, his wife, and his kid.”

“Unbreakable” ended up underwhelming critics and being not too profitable at the box office, which meant Shyamalan would not be able to pursue the sequel he always envisioned. When the director finally got around to making “Split,” which opened in theaters in 2016, he decided not to spoil in the marketing the film was his long-in-the-works “Unbreakable” sequel. The film was presented as a new Shyamalan-directed psychological thriller, and it wasn’t until the final moments of the film where the director included Bruce Willis’ David Dunn, bringing the world of “Unbreakable” and “Split” together on the big screen.

Later this month, “Glass” will close out the trilogy as Samuel L. Jackson’s “Unbreakable” villain Elijah Price orchestrates the ultimate battle between good (David Dunn) and evil (the Horde). “Split” was a big financial success for Universal Pictures, grossing $278 million worldwide opposite a $9 million budget. The movie’s popularity has set “Glass” up for an opening weekend north of $50 million (according to Variety), so is Shyamalan already prepping another sequel for the franchise to continue? Not so fast.

“That’s not interesting to me,” Shyamalan said when asked about cinematic universes taking over the box office. “There’s no danger in that. Or not enough danger, let’s say that…For me, my weapon isn’t matching pyrotechnics against pyrotechnics. I’m just not good at it! I just can’t — ‘Avengers’ and movies like that — I mean, I don’t even know how they do these things.”

When Vulture reporter Adam Sternbergh brought up the idea of “Glass” performing better at the box office than “Split” and prompting Universal to want more movies, Shyamalan remained firm on his answer.

“We’re not doing that though,” the director said. “I have the sequel rights to most of my movies, essentially for the reason to not do them.”