The President sat for an interview for “Get Me Roger Stone,” giving credence to integral role the infamous dirty trickster played in Trump’s campaign. 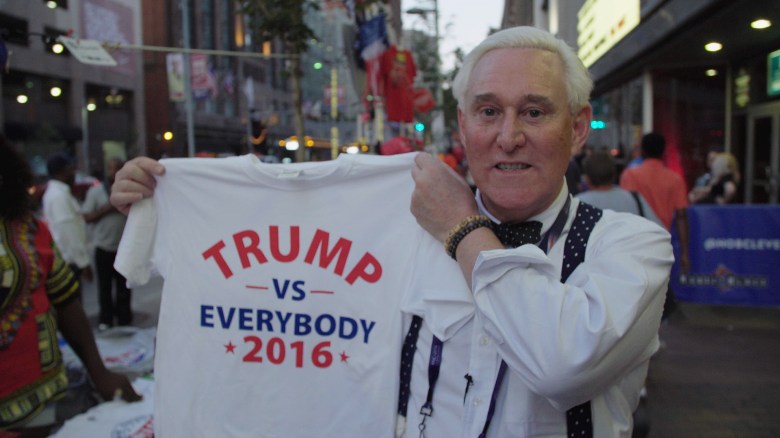 When Special Prosecutor Robert Mueller indicted Paul Manafort, President Trump’s White House downplayed its significance: Representatives said Manafort had only been the President’s campaign manager for two months. When the Trump campaign’s foreign policy adviso, George Papadopoulos, was indicted, the President pretended like he was errand boy he had never met.

When it comes to the just-indicted Rger Stone, however, President Trump will have a harder time publicly distancing himself from the significance of his longtime friend and political advisor. Stone, who was arrested this morning for lying about his communication with Wikileaks, is also the subject of a 2017 Netflix documentary, “Get Me Roger Stone,” in which Trump lays out his special history with the advisor.

In the documentary directed by Daniel DiMauro, Dylan Bank, and Morgan Pehme, Trump traces his 40-year relationship with Stone to their shared mentor, Senator Joseph McCarthy’s henchman Roy Cohn, and how Stone saw the now-President’s political potential years before Trump himself.

The documentary, which premiered at the Tribeca Film Festival and then a month later on Netflix (just four months into the Trump presidency), is not the typical antagonistic investigative political film. It was made with Stone’s full support, who has long embraced his reputation as bare-knuckled political advisor and admits to many of the dirty tricks that could link Trump to the Wikileaks dump of the Clinton campaign’s emails.

“I live a pretty Machiavellian life and I’m a skeptic. I tend to believe the worst of people because I understand human nature,” said Stone on camera. “That’s why one of Stone’s Rules is that ‘Hate is a stronger motivator than love.’”

The documentary uses archival footage and interviews to show how Stone was a pioneer of negative political advertising and used his influence to make a fortune as a lobbyist, but was run out of GOP establishment due to a scandal in the 1990s. Stone then rode the rise of Trump as presidential candidate to regain his power and influence in Washington. Trump removed Stone officially from the campaign, in part because he didn’t like the media referring to Stone as “Trump’s Brain,” but the documentary detailed, with on-camera-interviews how close the two remained.

“Even after Roger stopped being the principle political advisor to Trump, he continued to be an important advisor and is to this day,” said Manafort on camera. Manafort, who was once Stone’s business partner, partially credits Stone’s influence with Trump for his hiring as campaign manager. At the time, Russian officials were supposedly communicating with the Trump campaign about the stolen Clinton emails.

This Article is related to: Film and tagged Donald Trump, Get Me Roger Stone