"Black Panther" and "Bohemian Rhapsody" picked up momentum, while "Vice" and "A Star Is Born" lost it. 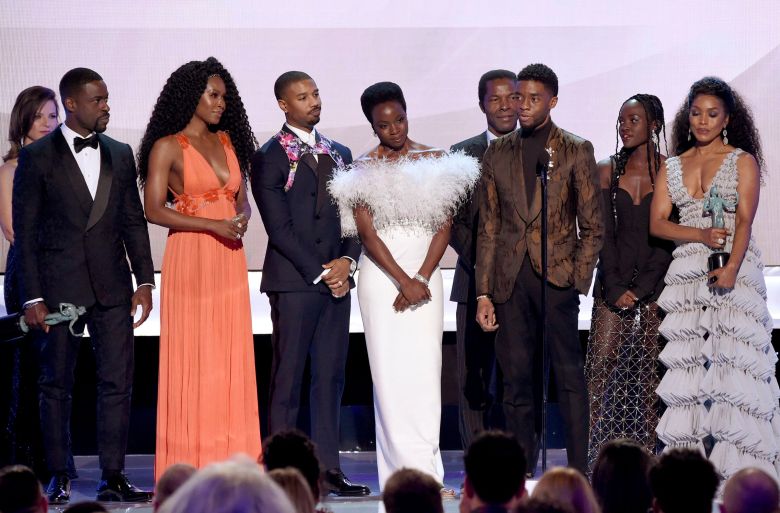 The cast of “Black” Panther at the 25th Annual Sag Awards

SAG nominations are often seen as a bellwether for the Oscar race, as the Academy acting branch dominates the votes, but this year’s SAG nominations didn’t overlap with the Oscar race as much as usual. While “A Star Is Born,” “Bohemian Rhapsody,” and “BlacKkKlansman” could have used some forward momentum for their bids by winning SAG Ensemble, the winner was the 12-member cast of “Black Panther.”

And they took full advantage of their moment. Star Chadwick Boseman took the microphone and answered two questions that kept coming up during multiple publicity tours. “Did we know this movie was going to receive this kind of response, and make $1 billion, and still be around during awards season?” And, “has it changed the film industry, the way it works?”

“The answer is to be young, gifted, and black,” he said. “We all know what it’s like to be told there is not a place for you to be featured, to be the tail not the head, beneath but not above. That is what we went to work with every day. We knew that we had something special that we wanted to give the world, that we could be full human beings in the world we were playing, that we could create a world that exemplified the world we wanted to see. We knew we had something we wanted to give…You can’t have a ‘Black Panther’ now without a 2 on it!”

Indeed, “Black Panther” won two awards, as it took home the first SAG award of the day, announced before the TBS/TNT broadcast began, for Best Action Performance by a Stunt Ensemble in a Motion Picture, beating out Tom Cruise vehicle “Mission: Impossible – Fallout.”

Heading into the Oscar race, this big win gives momentum to “Black Panther.” Losing steam are “Vice,” which took losses for both Christian Bale and Amy Adams, and “The Favourite,” which will have to look to the upcoming BAFTA awards for some winning momentum. That’s especially true for Golden Globe winner Olivia Colman, who lost tonight, as she did at the Critics’ Choice Awards, to Glenn Close for “The Wife.” Partly this was a career prize, as the nine-time nominee finally won her SAG award for Female Actor in a Leading Role. 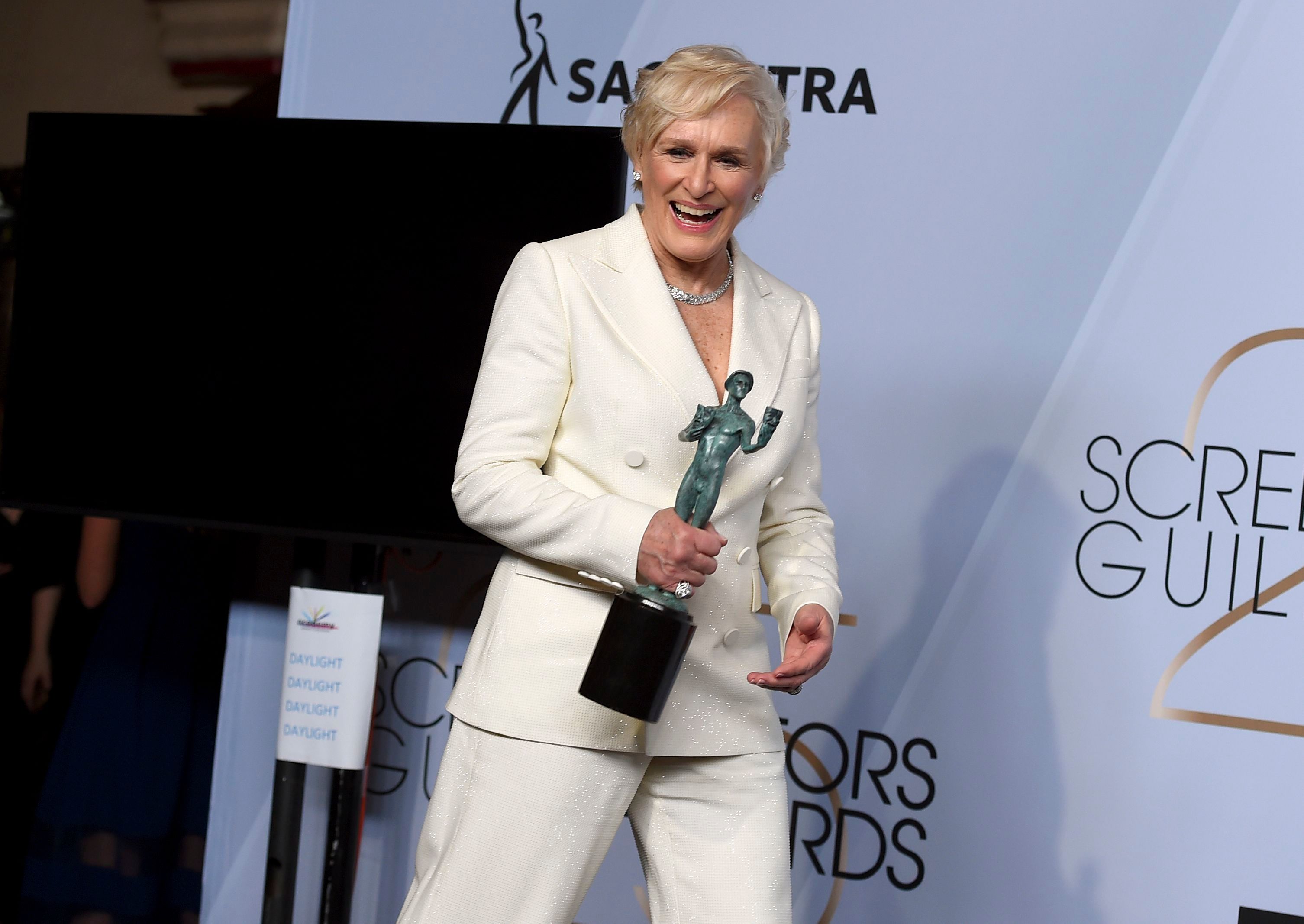 Glenn Close poses with the award for outstanding performance by a female actor in a leading role for “The Wife.”

“Film is the only art form that allows us the close-up,” Close said. “We have to remember how powerful that is. In a world that is consumed with different-size screens, the power we have is two human eyes looking into two eyes: That will give us empathy and understanding.”

Which brings us to the baffling lack of wins for “A Star Is Born,” which seemed custom-fit to win at the Globes and SAG Awards. While Lady Gaga shared the Critics’ Choice Award with Close and is sure to win Best Song for “Shallow,” Bradley Cooper has yet to win an award for “A Star Is Born,” and while he, Gaga, and Sam Elliott are Oscar nominated for acting, when they went onstage with Freddie Ramos to introduce their SAG Ensemble entry, they read their cue cards by rote — as they’ve been doing all awards season. Though Gaga has been a game awards campaigner, people are speculating about what is wrong with Cooper, who has seemed remote and disconnected. 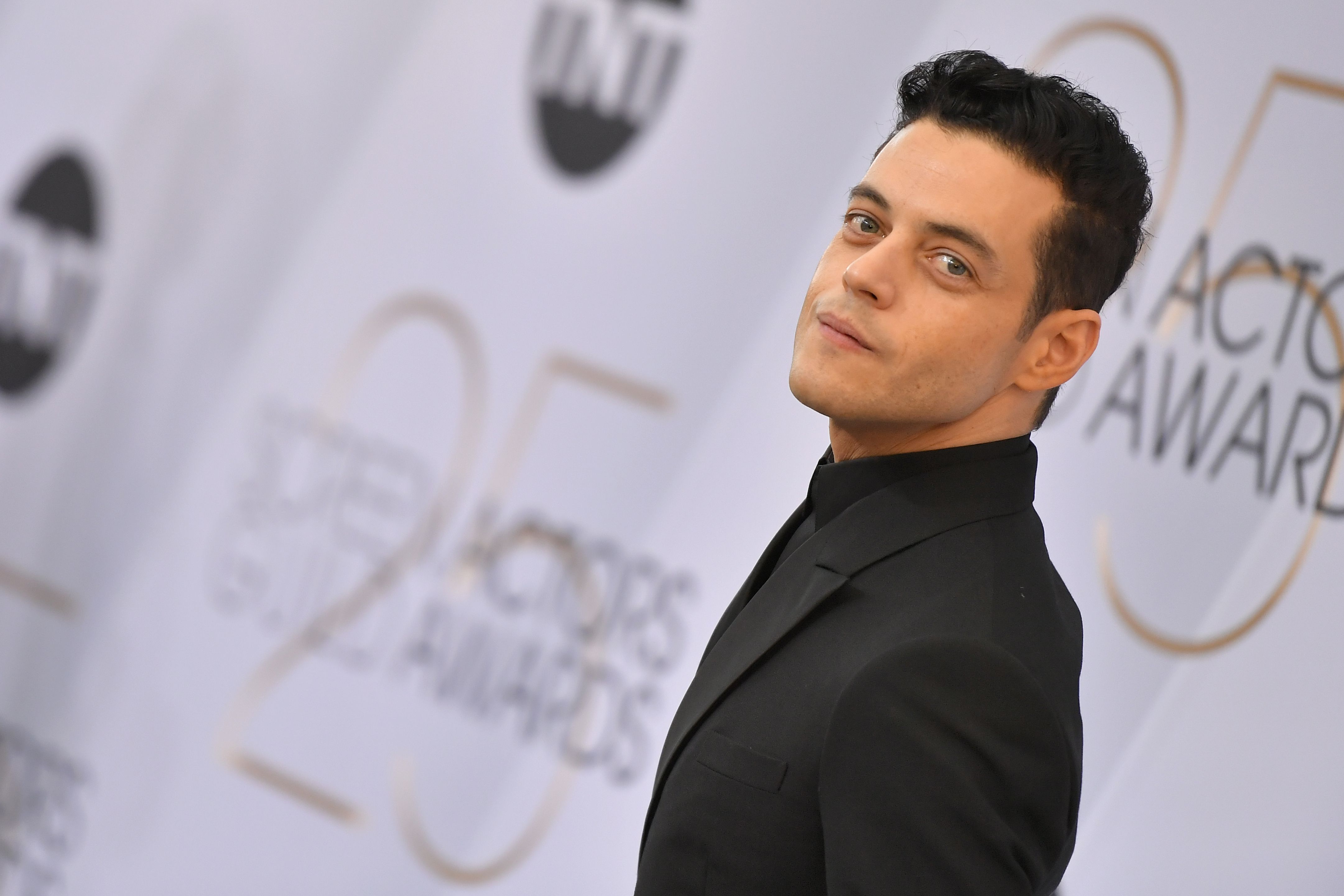 Four-time nominee Rami Malek, on the other hand, brought some sincerity to all his appearances, something that actors value. And the “Mr. Robot” star nabbed his first SAG win for Male Actor in a Leading Role for channeling pop star Freddie Mercury in “Bohemian Rhapsody.” “I thank Queen and Freddie Mercury,” he said. “I get some power from him, which is about stepping up and living your best life — he allows us all to feel that. This is again for him.” 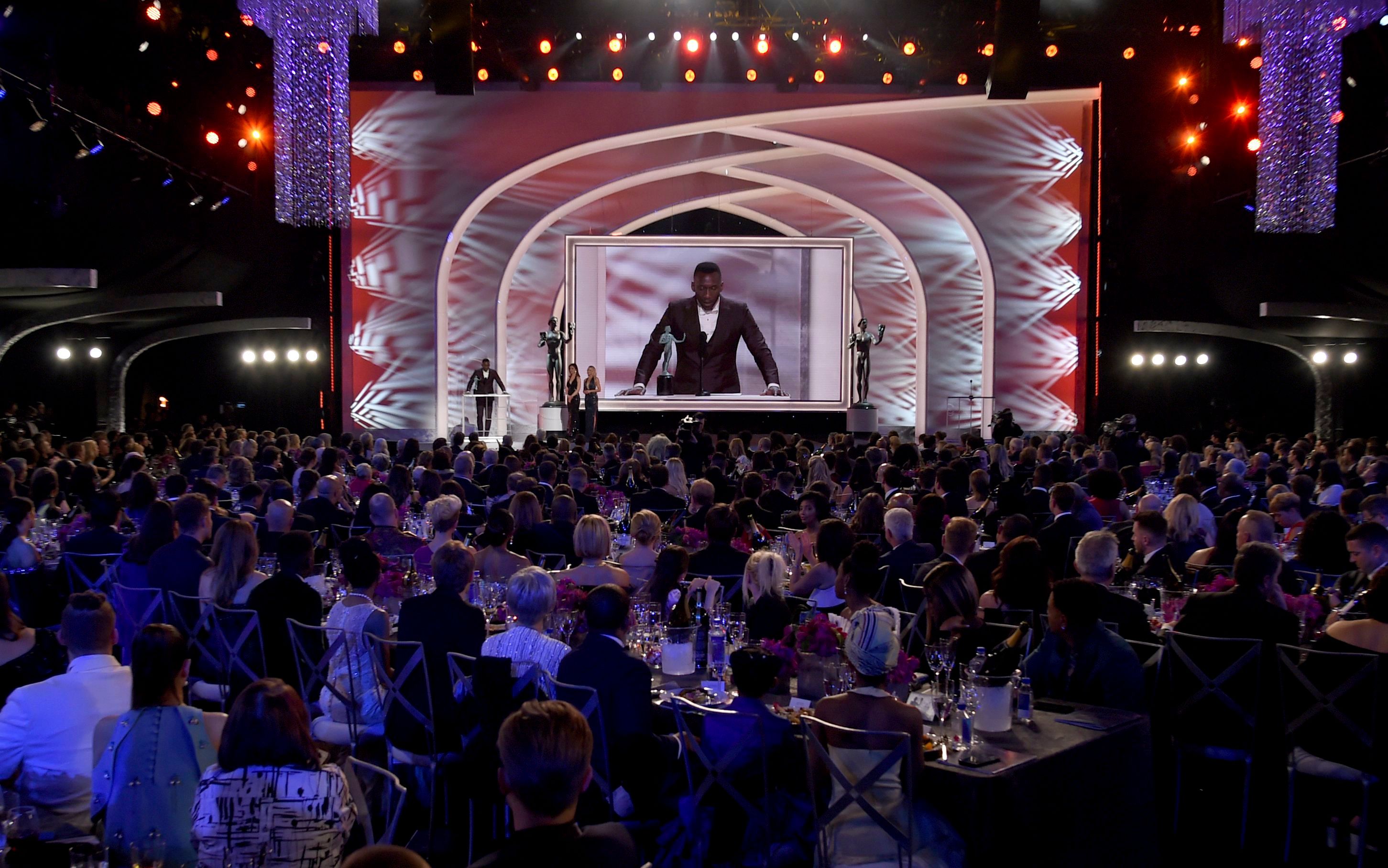 He beat out two veteran actors, Critics’ Choice and Globe winner Bale and Viggo Mortensen, who each gained more than 40 pounds for their roles in “Vice” and “Green Book,” respectively. PGA Award-winner “Green Book” didn’t make Ensemble, but won Supporting Male Actor for Mahershala Ali. Whatever might be wrong with Globe Comedy and PGA winner “Green Book,” it’s not Ali, who is widely admired for always taking the high road. Accepting his award, Ali threw support to his co-star Mortensen: “Viggo, it’s been an honor going on this journey with you. You’re such a beautiful actor and an amazing person.” It’s Ali’s to lose at the Oscars. 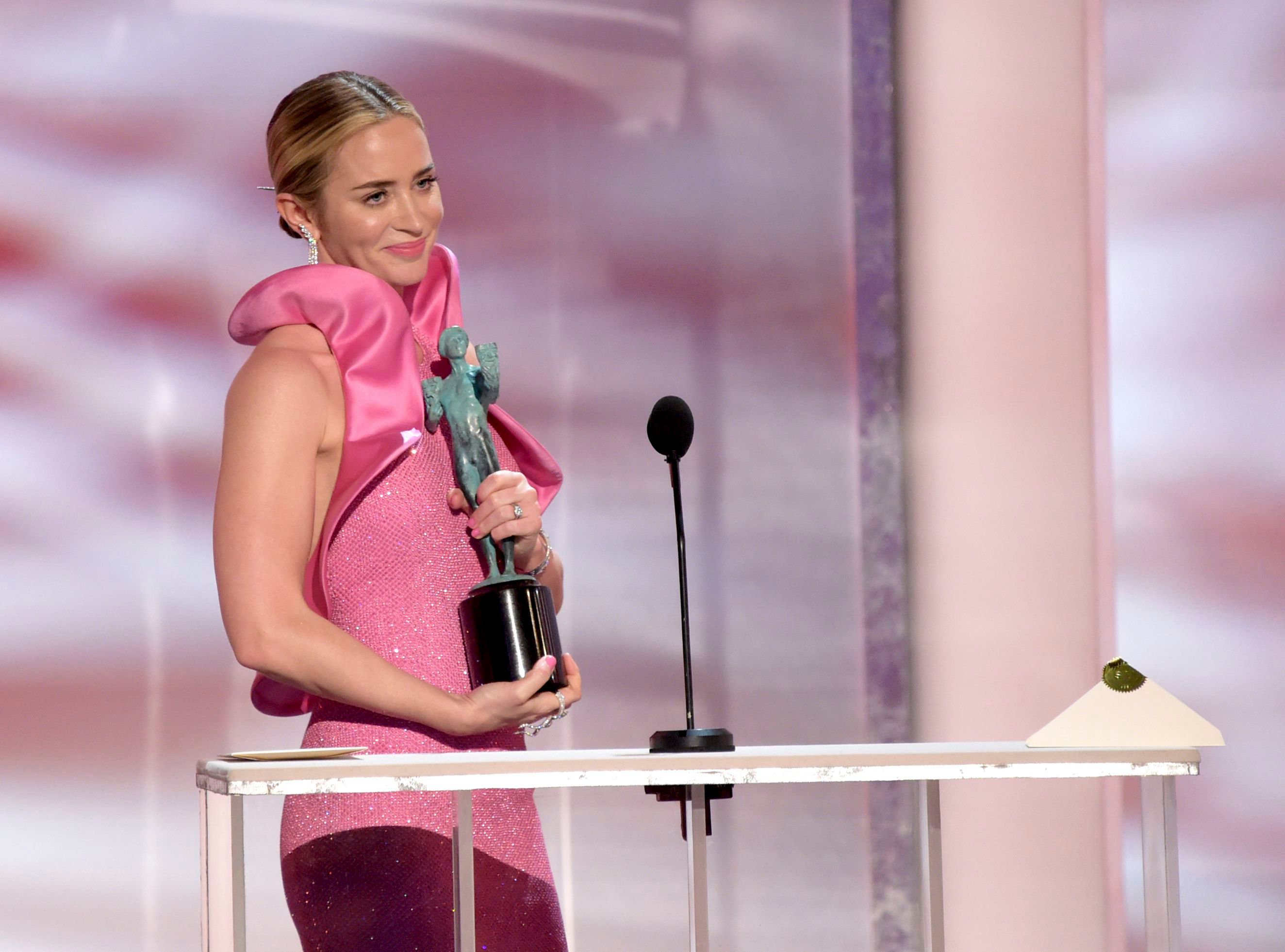 The 25th SAG awards presented a surprise award for Female Actor in a Supporting Role to non-Oscar nominee Emily Blunt, who played a virtually silent pregnant mom in “A Quiet Place,” saying, “That has truly blown my slicked hair back!” She thanked her husband, director and co-star John Krasinski, for the “the entire experience of doing this film with you.”

With Critics Choice winner Regina King not in the running for “If Beale Street Could Talk,” and the two “The Favourite” actresses knocking each other out, “Vice” star Amy Adams was expected to win this by a mile.

Which goes to show that the 120,000 SAG-AFTRA actors are more mainstream than the Academy. Expect more surprises on Oscar night February 24th.

This Article is related to: Awards and tagged Oscars, SAG Awards