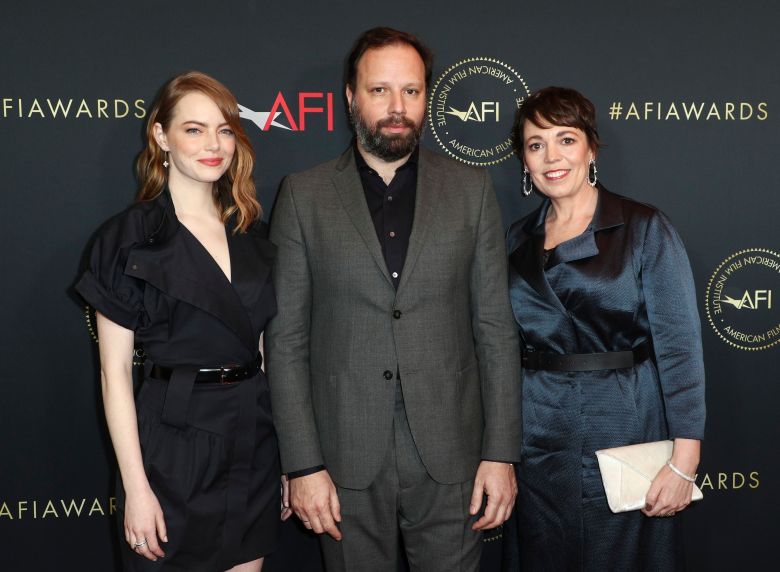 Heading into Golden Globes weekend, awards campaigners are taking every opportunity to put their contenders in front of cameras and media. One of the most civilized events is the annual American Film Institute Awards lunch, which is more relaxed and convivial than most gatherings, because, as AFI president Bob Gazzale always points out, everybody’s a winner.

The first week of January each year, top players involved with the 10 movie and 10 TV winners know all they have to do is comfortably socialize for an hour or so, eat their salmon, and applaud 20 clips. Actually, this year there were 21, as the film jury gave Alfonso Cuarón’s “Roma,” which was ineligible as a foreign-language film, a special award.

TV jury chief Rich Frank said his team had to sift through more than 500 scripted series. “They were tough to narrow down,” he said. Among the lucky winners was “Better Call Saul” star Bob Odenkirk, who drove himself to the event in his own car.

Gazzale pointed out that “Black Panther” cinematographer Rachel Morrison was an AFI conservatory grad, along with “A Star Is Born” D.P. Matty Libatique and “First Reformed” writer-director Paul Schrader, who was in the first class. Long overdue for an Oscar (shockingly, he did not get nominated for “Taxi Driver” or “Raging Bull”), Schrader got a warm standing ovation from the crowd.

Spike Lee got laughs when Gazzale pointed out he was wearing his NYU hat. “I applied to AFI, I didn’t get in!” he called out from his table. (The AFI gave him an honorary degree in 2011.) Lee has an asset as an awards campaigner: He loves working crowds, and knows how to glad-hand, charmingly.

“BlacKkKlansman,” along with AFI winners “Roma,” “A Star Is Born,” “A Quiet Place,” “Green Book,” “Black Panther,” and “The Favourite,” all scored PGA nominations on Friday morning. And some will win at the Golden Globes Sunday, gaining valuable momentum.

On the indie side, Fox Searchlight’s Nancy Utley and Steve Gilula hosted “The Favourite” stars Emma Stone and Olivia Colman and director Yorgos Lanthimos, and A24’s David Fenkel’s table included both “First Reformed” and “Eighth Grade.” TV show creators Ryan Murphy and Bill Hader were rubbing shoulders with the likes of “If Beale Street Could Talk” auteur Barry Jenkins and Brian Tyree Henry, who was sitting with Lakeith Stanfield at FX’s “Atlanta” table.

Academy president John Bailey, meanwhile, was ducking questions about the Oscars’ missing show host and Kevin Hart. As soon as the lunch was over, he made a quick getaway on foot.

This Article is related to: Awards and tagged A Star Is Born, AFI Awards, American Film Institute, Golden Globes, Oscars