Nick Hornby's two-hander is a charming, insightful, and well-acted short-form series that feels more like an exercise than the main event. 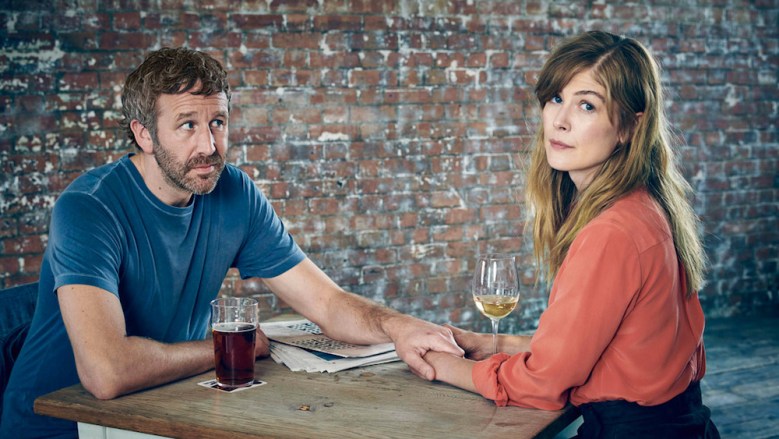 Chris O’Dowd and Rosamund Pike in “State of the Union”

When you’re learning the craft of screenwriting — particularly how to write dialogue — it’s not uncommon to be given a writing exercise where you’re restricted to two people, one setting, and a brief length of time. Maybe the scene lasts nine or 10 pages, but the point is to make the writer drill down on what matters: realistic conversation that has a clear, story-driving arc and can build well-rounded characters. It’s a lot harder to do well than it may sound, especially if the author decides to make his couple stationary and offer them a pint of beer and a glass of wine as their only props.

Of course, when you’re a two-time Oscar nominee, like “State of the Union” author Nick Hornby, it’s probably good to challenge yourself a bit. His upcoming SundanceTV series indeed features only two speaking roles, one setting (a pub), and episodes that clock in at 11 minutes or less, and it still manages to entertain and enlighten as thoroughly as most traditional half-hour comedies. Still, given the talent involved — including the two actors, Rosamund Pike and Chris O’Dowd, as well as two-time Oscar-nominated director Stephen Frears — the light and breezy 90-something-minute production feels like a warm-up to something more substantial.

Meet Tom and Louise. Tom (O’Dowd) is a down-on-his-luck music critic (go figure) who’s been cuckolded by his wife, Louise (Pike). Though she’s penitent and apologetic, Louise also feels Tom’s behavior of late is what drove her into the bed of another man. This is the crux of their debate as they prepare for their first day of marriage counseling, and it continues in the nine weeks that follow as Tom and Louise get together for a quick drink and a chat in the 10 minutes prior to their weekly appointment.

These encounters are all the audience sees of the couple. Though plenty of episodes track their walk across the street to the therapist’s office, never do we go inside another venue, flash back to prior events, or even break the sequential order of each meeting. Such tricks aren’t part of the presumed deal Hornby has made with himself, and they’re rendered useless by his melodic discourse, the actors’ electric performances, and a general air of aspiration.

Hornby’s dialogue walks the fine line between Sorkin-esque poetry, where the words draws so much attention to themselves you can only accept them as beautiful, made-to-order entertainment, and naturalistic expressions of love, frustration, and exploration. They’re witty enough to be written but not so smart they couldn’t have been thought up on-the-spot, under the best possible circumstances. Certainly, there’s a rat-a-tat rhythm between their shared thoughts that has to be accepted, or else the whole production would be bogged down by the spaces that should, realistically, be there, but that’s how it should be, and O’Dowd and Pike erase any lingering objections with their endearing personalities.

Their accents help — really! His Irish brogue and her English lilt are the perfect pair — distinct yet complimentary — and make their thoughtful musings sound all the more eloquent. Tom is a somewhat stereotypical despondent husband: He’s seen enough failure in his life he’s starting to assume it into his identity — a fragile male ego in need of tending, and Louise gave him an emotional kick to the balls instead (as he puts it). Each conversation, each pint, each sip of wine draws back the curtain on their relationship, from long-running resentments to recent revelations, and Louise is the one commanding the ship. She pushes them toward discovery and pulls them out of familiar traps. Pike polishes these maneuvers well, rounding off each turn and twist with an uncertainty tinged with hope.

They’re both magnificent, as is the script and Stephen Frears’ confidant, clean direction. It’s so good, in fact, you’re left wishing there was more; more time, more settings, more to the story than just the simple structure these professionals excel within. The question of whether or not Tom and Louise can save their marriage is clearly enough to drive this 10-episode series, but it’s also clear the talents of everyone involved is more than enough to drive much more. Hopefully they choose a bigger vehicle very soon.

“State of the Union” premiered at the 2019 Sundance Film Festival as part of the Indie Episodics Lineup. It will air on SundanceTV on a date to be determined.

This Article is related to: Television and tagged Reviews, State Of The Union, Sundance