This year's Austin gathering is another promising mix of discoveries and proven talent. Let the buzz start here. 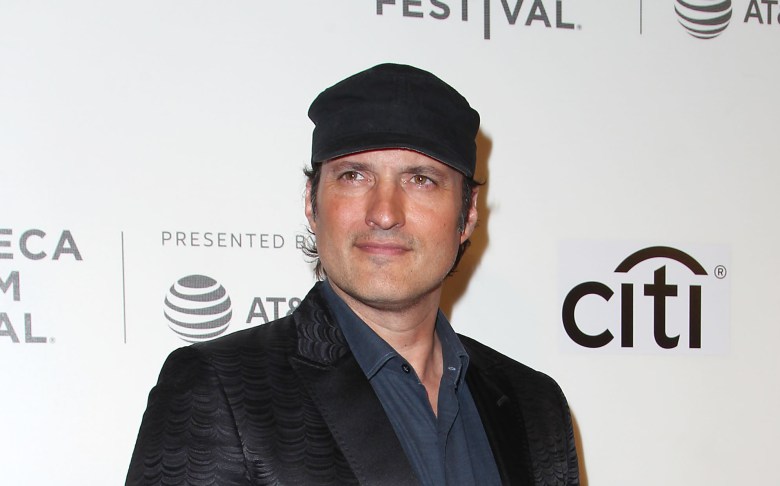 The first half of January is always busy in the film community, as Oscar voting comes to a close and the Sundance Film Festival starts its engine. This year, the SXSW Film Festival threw its cowboy hat into the ring, pushing up the initial announcement of its film lineup instead of waiting until after Sundance. The result is an even more complex window into major festival premieres and potential discoveries that will distinguish the first quarter of 2019.

The move is partly the result of Sundance ending later than usual; while the festival normally goes until the end of January, this year, it ends February 3. The constrained timeline also impacted SXSW’s earlier submission deadline, and meant that its programming team had to scramble to lock in this year’s selection. “We were tighter about no exceptions to the deadline,” said SXSW Director of Film Janet Pierson in an interview. “We had to be decisive sooner.”

Nevertheless, the lineup has the flavor of a typical SXSW: Competition sections littered with potential discoveries, a handful of anticipated studio crowdpleasers, and several familiar names in unusual new projects. While the festival still has more to announce, including its midnight films, the current slate provides much to explore. Here are some of the potential highlights.

Robert Rodriguez Returns to His Roots

The legend goes back nearly 30 years: When Robert Rodriguez made his 1992 debut “El Mariachi,” he assembled his $7,000 budget out of payments he received for participating in medical experiments. Now, he’s going back to his roots in more ways than one. His new reality show, “Rebel Without a Crew,” follows five directors making their own debuts on the same budget; in the process, Rodriguez also directed a new feature of his own for the same price.

For “Red 11,” Rodriguez and his son Racer joined forces to polish up a screenplay the filmmaker wrote decades ago based on his experiences as a lab rat. The story revolves around a filmmaker attempting to pay off his debt to the cartel through medical experiments who winds up in a more challenging situation than he expected. “It’s fun, cool, and crazy,” said Pierson. “The guy has a lot of filmmaking panache. Austin isn’t known for its actors, but they used local actors who are really great.” Rodriguez will also preview clips from “Rebel Without a Crew” for a master class at the festival.

“It’s really intimate, beautiful, authentic and generous,” Pierson said of the series. “You see him breaking everything down at the studio using what he has.”

Well, he’s had a few. After his interview podcast “WTF With Marc Maron” became a cultural phenomenon, the deadpan comedian had a solid run as the story of his own IFC show, and has been enjoying decent exposure as a supporting character on Netflix’s “GLOW.” But Maron has yet to show his chops as a real movie actor — until now. With “Sword of Trust,” premiering in the Narrative Spotlight section, Maron joins forces with improv-focused filmmaker Lynn Shelton to play a moody pawnshop owner trying to chase down an elusive historical object that proves the South won the Civil War. “It’s a terrific showcase for him,” Pierson said. It also marks a return to film comedy for Shelton, who has been cranking out television credits in recent years in addition to the drama “Outside In” in 2017.

The filmmaker’s distinctive approach to improvisatory storytelling has been generating waves since “Humpday” a decade ago, and she won’t be the only one utilizing the approach in SXSW’s Narrative Spotlight section. “You really have this mini-trend of people having fun with accomplished talent and some improvisatory spirit,” Pierson said.

In “Pink Wall,” British director Tom Cullen teams up with his partner Tatiana Maslany and Jay Duplass for a snapshot of six moments from a relationship; there’s also Jeremy Teicher’s “Olympic Dreams,” which follows a skier at the Olympic Winter Games who befriends a dentist after she loses her race. The whole movie was shot against the actual backdrop of the 2018 Olympics in South Korea.

Charlize and Seth in Love

Among Seth Rogen’s many collaborations, two that stand out are the films he made with Jonathan Levine, the sweet cancer survival story “50/50” and the ludicrous holiday stoner opus “The Night Before.” Their third collaboration introduces a promising partner in crime — Charlize Theron, who stars opposite Rogen in an untitled rom-com that takes place under unusual circumstances.

The movie, which was initially called “Flarsky” when it was announced last year, finds Rogen playing an unemployed journalist engaged in a clandestine affair with Theron’s Secretary of State, the dream girl of his youth. “It’s fucking hilarious and has great performances,” Pierson said. “Plus, it’s actually a romantic comedy with political overtones.” Rogen has found great success launching everything from “Knocked Up” to “Sausage Party” at the festival, so this Lionsgate production is bound to be a hot ticket at the festival. 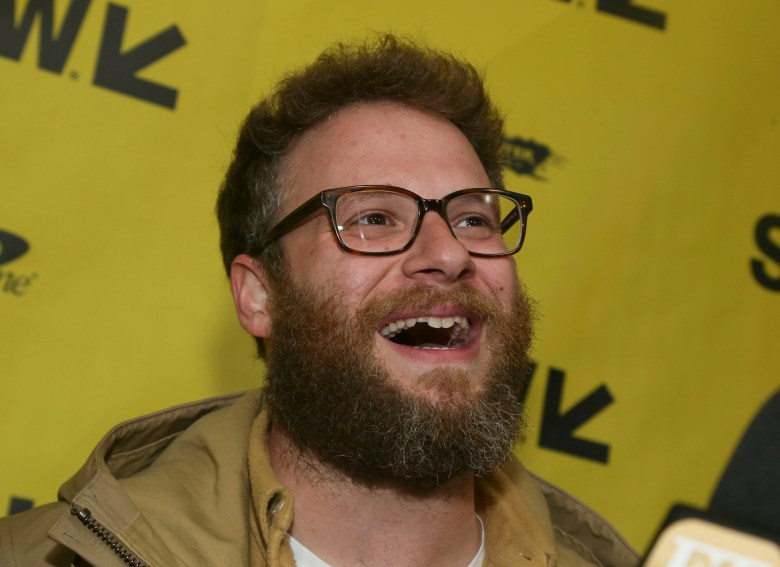 Seth Rogen arrives for “The Disaster Artist” at the Paramount Theatre during the South by Southwest Film Festival, in Austin, Texas

The other high-profile film selections include “The Beach Bum,” Harmony Korine’s stoner followup to “Spring Breakers” (a SXSW 2012 hit), as well as “Booksmart,” which marks Olivia Wilde’s directorial debut. She returns to the festival following her starring role in the festival’s 2018 entry “Vigilante.” Pierson said Wilde’s first feature behind the camera “was a complete surprise to us, that this gorgeous, multi-talented actress has turned out a razor-sharp, hilarious, and totally smart comedy.”

The saga of Bonnie and Clyde has been so deeply tied to popular culture that any other take on the scenario might seem like blasphemy. But Netflix-produced “The Highwaymen” provides the unique new perspective of the Texas rangers who tracked down the famed robbers, and it provides dueling acting showcases for Kevin Costner and Woody Harrelson. “It’s this meta film, since Kevin and Woody are both aging,” Pierson said. “You’re looking at these guys who have been in so many movies, and you’re playing the ‘Bonnie and Clyde’ movie in your head the whole time you’re watching.”

It’s been eight long years since British comedian Christopher Morris’ masterful debut “Four Lions” lit up Sundance with its subversive portrait of clumsy terrorists. At long last, he has delivered another timely and unusual saga with “The Day Shall Come,” which features Anna Kendrick in the story of a Miami preacher who gets into trouble with the FBI. “It’s provocative, it’s juicy, and it’s very well done,” Pierson said. “It’s barbed and political, definitely outside studio norms.” Fans of “Four Lions” are already salivating over this one, and Morris’ complex blend of comedy and other genre elements is likely to energize the SXSW crowd.

While Beto O’Rourke lost the midterm election to Senator Ted Cruz, the progressive politician energized a base of left-leaning Texans and established a national presence that launched early conversations about a 2020 presidential candidacy. Filmmaker David Modigliani (“Crawford”) captured the many ups and downs of O’Rourke’s historic campaign with exclusive access all the way through election night. For “Running With Beto,” he puts the phenomenon in a complete narrative context, while keeping open the possibilities around the corner.

The film, which was produced by former SXSW staffer Rebecca Feferman and Nancy Schafer in association with Pod Save America, might create an excuse for O’Rourke himself to make a SXSW appearance. “They’re hoping he will be there,” Pierson said. 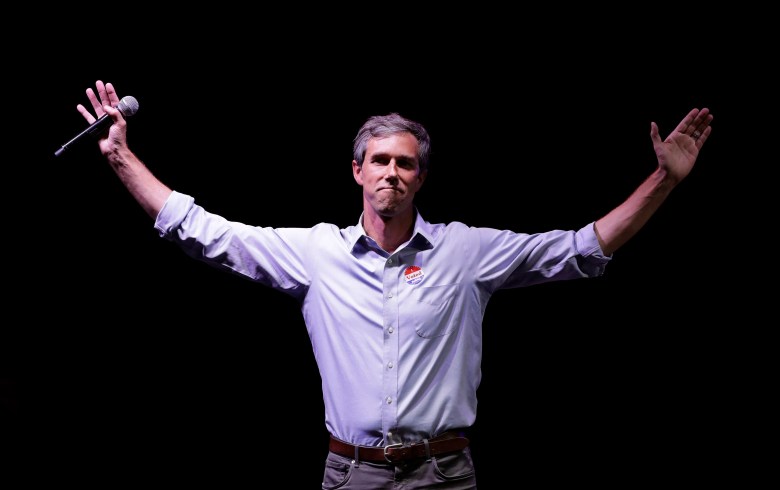 O’Rourke also appears in another documentary playing the festival that may expand some of the conversations on the ground about Texas’ current political concerns. With “The River and the Wall,” filmmaker Ben Masters follows five friends — including an undocumented immigrant — as they wander back and forth across the Texas-Mexico border. As talk of a wall continues to dominate national conversations, the movie is poised to provide a personal context for the discussion. “They have to kayak and ride horseback to cross the border, and it’s just a breathtaking landscape,” Pierson said. The group talks to O’Rourke as they pass through El Paso. “It’s really juicy in terms of what it covers,” Pierson said.

Half the competition directors are women, but Pierson said the focus of the stories caught the programming team by surprise. “Certainly we’re looking for gender parity, but this reads very female,” she said. “That was not intentional at all.”

Artists in the Spotlight

The festival’s Documentary Competition tends to favor personal profiles over big issues, but this year is particularly focused on a wide range of artists. These include “Museum Town,” which focuses on the declining industry of the Massachusetts town surrounding MASS Moca, “Well Groomed,” about Competitive Creative Dog Grooming, and “Stuffed,” a portrait of taxidermists. Art car artist Harold Blank (“Wild Wheels”) steps behind the camera for “Why Can’t I Be Me? Around You,” the story of a 53-year-old man who decides to get breasts and faces rejection from his community. Pierson described many of the subjects throughout this section as “people are outsiders, who have never fallen within standard descriptions.”

The best SXSW discoveries are usually movies that materialize out of nowhere and tackle entirely unexpected subject matter. One promising selection along these lines is “Who Let the Dogs Out,” which is exclusively focused on the history of that classic Baha Men and its peculiar ownership history. Filmmaker Brent Hodge spent eight years researching his subject. “They made something so entertaining out of a simple premise,” said Pierson, who added that she wasn’t sure if the filmmakers got permission to use the track, but “the movie is full of the song, so one would hope.”

Another intriguing question mark in the Visions section: “Sakawa,” Belgian director Ben Asamoah’s look at a trio of Ghanaian teens who engage in internet scams while incorporating some kind of black magic into their schemes. Specifically, the teens use dating services to entrap their victims. (Pierson said the festival would have put the film in its narrative competition if it weren’t premiering at another festival.) “This one was a real favorite” of the programming team, Pierson said, but “we’re not sure if it’s a total documentary.”