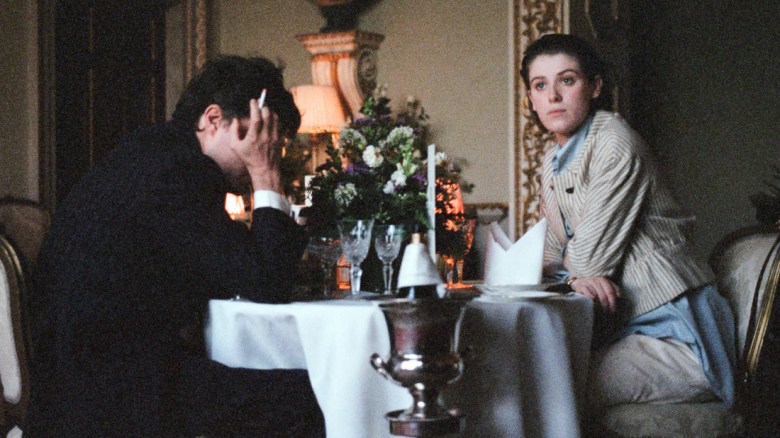 There isn’t much of a story in Joanna Hogg’s heartfelt and searingly honest “The Souvenir” — the British filmmaker, somehow a breakthrough talent for the last 30 years, has always been less interested in plot than condition — and so this romantic drama about a young woman’s doomed first love might just as well be summarized by a poem from the late Mary Oliver:

“Someone I loved once gave me
a box full of darkness.

It took me years to understand
that this, too, was a gift.”

Set in the early 1980s, shot with the gauzy harshness of “Phantom Thread,” and named after an 18th century rococo painting by Jean-Honoré Fragonard, “The Souvenir” finds Hogg reaching into her own past in order to reclaim it as a present; it’s a somewhat disguised self-portrait that’s sketched with almost four decades of distance between its artist and her canvas, the time between then and now allowing Hogg to better appreciate how the lovesick girl we see on screen grew up to be the lauded filmmaker we feel behind the camera.

That seems to have been one hell of a journey. Then again, becoming who you are is one of the hardest things we ever have to do, and none of us are guaranteed to get there in the end. Equal parts reverie and requiem, “The Souvenir” reveals itself to be a diorama-esque dissection of that volatile time in your life when every molecule feels like it’s restlessly vibrating in place, and even a brief encounter with another person has the power to rearrange your basic chemistry; when you’re so desperate to become yourself that you’ll happily believe in anyone else you happen to find along the way.

The film begins and ends with a shy 25-year-old film student named Julie, and she’s one letter off from Hogg in all respects; not a direct recreation of the director’s younger self, but close enough that her London flat is a perfect replica of the one that Hogg lived in at that age (the set was built inside of an airplane hanger, and the city views seen through the windows are 35mm projections of photographs that Hogg took in her twenties). Julie, embodied by the brilliant newcomer Honor Swinton Byrne in a devastatingly naturalistic performance that she peels back like a scab, is a Molly Ringwald type who can’t help but wish that she were a bit less posh and proper — that her world was as large as her appetite for it. Julie wants to make a metaphor-laden movie about a momma’s boy from the working class city of Sunderland, but she only seems drawn to it because the story is so removed from her own experience. Is her own life not valid?

And then she meets an ominous-looking boy (or man) at a party who answers that rhetorical question for her. He tells her that “We’re all as real as each other,” and it’s as if those are the only words she’s ever needed to hear. She’s in love. His name is Anthony (a febrile, fantastic Tom Burke), and he looks like a cross between Hugh Grant and Peter Lorre. He takes Julie to the ritzy Wallace Collection where the Fragonard painting is housed, and he pays for lunch with a check. He tells Julie that she’s lost and always will be, and she thinks that at least he’s found her. She would never have guessed that Anthony is a heroin addict; one of his friends (played by Richard Ayoade) has to tell her. Just like that, Julie finds herself in a story that’s far removed from her own experience.

“The Souvenir” unfolds with the random flow of remembrance, hopping from one flashbulb memory to another with little regard for pace or structure; it’s obvious why some of these scenes might have a lasting impact on Julie’s life, but there’s often little rhyme or reason to why certain moments stick with a person, and Hogg never ignores that fact for the sake of narrative convenience. And this really is a film made out of moments, some of which come and go with no clear purpose. Julie spends a lot of time sitting at her desk and trying to get out of her own head. Anthony is often there with her, shuffling around in a bathrobe as we try to suss out how much of his latent hostility is owed to the heroin. Julie doesn’t want to know where he disappears to all the time; she delights in the mystery of it all. The more elusive Anthony seems, the more special it is that he always returns to her.

Once in a while, Julie meets up with her protective mother (a brittle and Thatcher-chic Tilda Swinton, Honor’s actual mom), or hovers in the background of one of her film school classes. As per usual in Hogg’s films — in which a severe aesthetic clashes against improvised dialogue in order to create a destabilizing friction between order and chaos — these episodes are both rigid and hyper-naturalistic at the same time, like someone desperately trying to thread together the logic of a dream they once had. A handheld camera shooting a soft film stock in shallow focus touches everything with a fuzzy sense of romance, frustrating Julie’s growing need for clarity. She’s only outdoors for a few quick seconds of this two-hour movie, and it isn’t long before a certain claustrophobia to sink in through the walls, as though Hogg’s young stand-in might suffocate to death if she can’t escape herself and find her place in the world.

But it’s Anthony who hems her in more than anything else. Julie might see him as her bridge to some kind of broader experience (she’s eager to ignore class, erase her own privilege, and think of her boyfriend’s addiction as more of a quirk than a problem), but Anthony relies on heroin more than he relies on her, and it’s only a matter of time before he starts to steamroll over Julie’s creative ambition. Mercifully, that rancid process subverts expectations. Hogg avoids the sort of histrionic screaming matches that you might expect from the material, and Julie — for better or worse — is all too happy to put Anthony’s needs before her own. She loves his feral unpredictability, and never tries to tame him. She knows that all of this might be the stuff of a great movie one day.

“The Souvenir,” by its very nature, can’t shame her for that. Not only does the film revolve around an artist who’s learning how to oxidize her pain into something productive, it’s also the product of Hogg’s own process; a tender history of its own making. It may have taken Hogg several decades to realize that her own box of darkness was actually a beautiful gift, but she unwraps it with the care and tenderness of someone who understands its true value. We may never know who gave it to her — if the “Anthony” from her own life is similar to the one she created on screen — but her gratitude for him reverberates so clearly through the unforgettable final shots of this film that even Hogg’s most painful memories are reborn into something beautiful. “We want to see life not as it’s lived,” Anthony tells Julie, “but as it’s experienced within this soft machine.” “The Souvenir” allows us to do just that. And with Hogg slated to shoot a direct sequel with Byrne and Robert Pattinson this summer, it may be a gift that keeps on giving.

“The Souvenir” premiered at the 2019 Sundance Film Festival. A24 will release it later this year.

This Article is related to: Film and tagged A24, Reviews, Sundance, The Souvenir