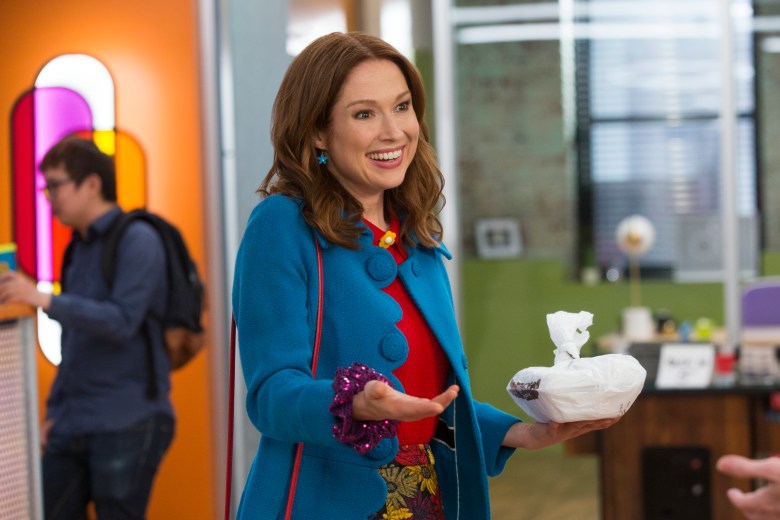 One of the most striking things about “Unbreakable Kimmy Schmidt” is that from the beginning, it was never a safe bet. Tina Fey had built up a lot of goodwill with the Emmy-winning “30 Rock,” and she and co-creator Robert Carlock channeled it into a daring premise that aimed to find the funny side of a young woman (Ellie Kemper) reconnecting with the world after surviving 15 years of entrapment.

And that wasn’t even the weirdest aspect of the show, thanks to Kimmy’s new friends, the sideways tugboat apartment building she lives in, and a personal journey which took her from a frightened former “mole woman” to becoming the J.K. Rowling-esque author of “The Legends of Greemulax,” a children’s book series which inspires both young boys and girls to be better.

Over the course of four seasons, “Kimmy Schmidt” has created its own weird little world, one where Greg Kinnear does daytime improv, the cats of “Cats” can’t be trusted, and real musicals like “The Lion King” are just as relevant as that “classic” film “Daddy’s Boy.” Much of the show’s unique charm can be traced to its core cast, anchored by Ellie Kemper, who make up one of TV’s most eclectic yet well-defined ensembles. 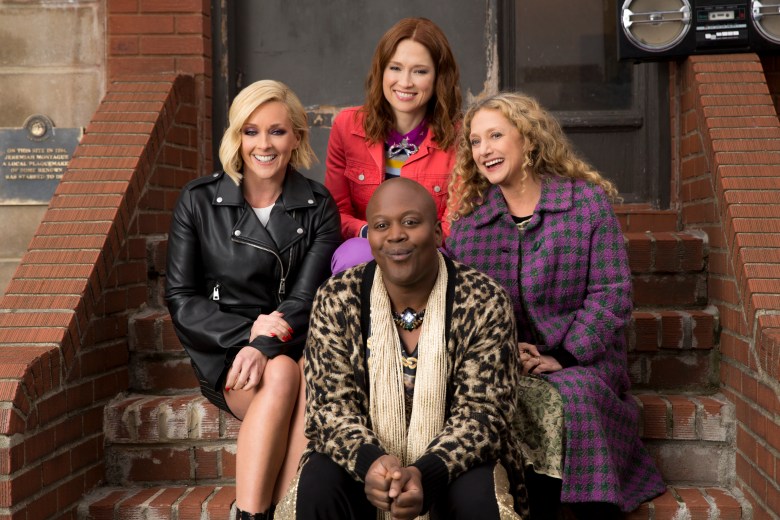 It’s interesting to look back at where these characters started in Season 1 and realize that while quite a bit has changed for all of them, they remain very much fundamentally the same people — a credit to their initial creation, as well as the ways in which the writing has always kept up with their evolution over the years.

“Kimmy Schmidt” Season 4 was split into two chunks, with Part 1 debuting last May (which means that Season 4A was Emmy eligible for the 2018 awards, and that Season 4B will be eligible for 2019). In future years, viewers will get to enjoy Season 4 all at once, which will be much to the show’s advantage — the second half of Season 4 plays as a much more coherent whole than the first half, but that’s because so much of the first half is dedicated to laying random track that the show wouldn’t fully bring together until the end. It’s definitely worth it to rewatch those episodes (or watch Season 4 from the beginning, if you missed it when it first premiered back in May) before delving into the remaining rest of the story.

While technically Season 4 is 12 episodes long in total, one of those episodes, “Sliding Van Doors,” is really a two-fer, and a fantastic format-breaking look at what would have happened to Kimmy, Titus, and the rest of the gang had just a few things gone differently for them. (In classic “Kimmy” fashion, it’s of course all tied to a pop culture reference, obviously the 1998 Gwyneth Paltrow rom-com “Sliding Doors.”)

These new episodes capture all the undeniable charm of “Kimmy,” delivering some series-best moments and great new and returning guest stars, including Jon Hamm, Zachary Quinto, Busy Phillips, Amy Sedaris, Fred Armisen, Jon Bernthal, Steve Buscemi, and Kenan Thompson. The one catch is that the pace remains pretty steady for the bulk of the season — before dramatically ramping up for the last three episodes. All at once, Titus’s (Tituss Burgess) Broadway career is exploding, the city is going to explode Lillian’s (Carol Kane) sideways tugboat building, and Kimmy’s start-up job is going nuclear; it’s a bit jumbled and rushed. 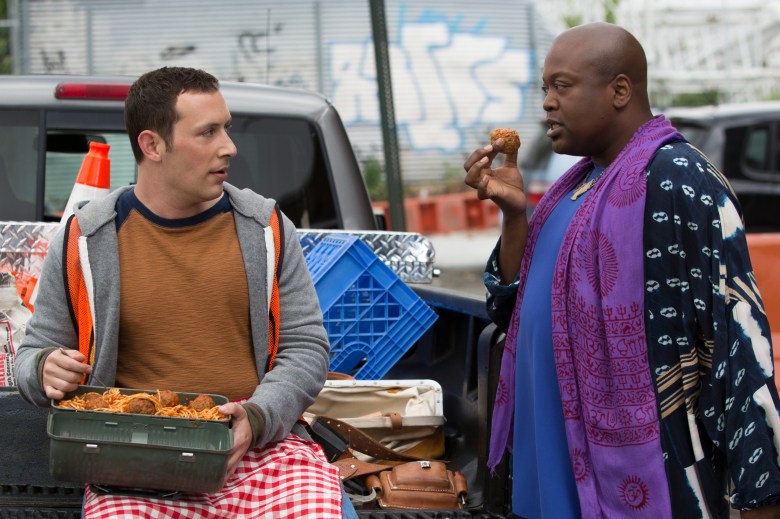 But before then, the show still manages to keep up a number of ongoing storylines, like its roast of Men’s Rights activists as personified by a dope named Fran (Bobby Moynihan). It also explores the complications of the #MeToo movement, as Titus tries to decide whether or not to come forward about the harassment he experienced at the hands of a famous but evil puppet. (In a cameo as himself, Ronan Farrow proves he has pretty solid comedy chops, if he ever wants to take a break from world-improving investigative journalism.)

Some of this is tough material, but like its titular heroine “Kimmy Schmidt” never backs down from a challenge. Never being afraid of the premise’s innate darkness meant that whenever the story required it, “Unbreakable Kimmy Schmidt” would choose to honor Kimmy’s very real trauma over a happier or more comedic outcome. One interesting consequence of this is that despite four seasons worth of charming love interests, Kimmy never really settled down with anyone, even at the end — which works to the show’s credit, because that was never really the point of her journey.

Instead, “Unbreakable Kimmy Schmidt” delivers an ending that manages to be both a complete surprise and yet totally perfect to the show and its message. The epilogue is framed as a flash-forward to the year 2023, containing some relatively expected “where are they now?” moments: Titus has attained both stardom and a happy family life with Mikey (Mike Carlsen), Jacqueline is thriving as an agent, and Lillian has found a whole new platform to deliver her special brand of weirdness.

But then it’s time to find out what Kimmy has been up to, and it’s amazing. The “K.C. Schmidt” novels have become the inspiration for a new theme park, and on opening day, Kimmy’s surrounded by her fans to cut the ribbon on a “Greemulax” roller coaster ride. Kimmy’s mom Lori-Ann (Lisa Kudrow, always the best) is there to be the first on board, but it’s the little boy who proves the most moving, getting a hug from Kimmy after he thanks her for her books, because “they make me feel safe.” 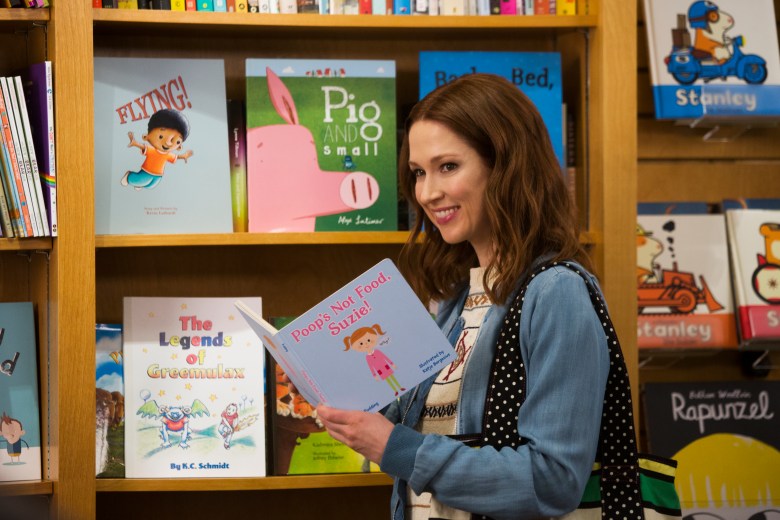 The fact that Kimmy’s final moments take place at an amusement park, as opposed to something more expected (and easier to shoot) like a public reading or convention panel, adds a massive layer of important context to her relationship with her mother. It’s a reflection of the Season 2 finale (“Kimmy Finds Her Mom!”), which found Kimmy finally getting a chance to confront Lori-Ann over her absentee parenting and some important insight into why her mother would abandon her so often for life as a “coaster head.” “Sometimes you just want to scream your head off. A coaster’s the only place no one looks at you weird,” Lori-Ann tells her.

It’s one of the show’s most resonant quotes, because it’s true — sometimes you need to scream, because the world is what it is. Two seasons later, though, a rollercoaster, and the fictional world that it represents, means something entirely different.

As dark as the show ever got, it never lost its core sense of optimism, that sense that no matter how bad things get, there’s always a chance to get better. No other ending could have captured that as well as this one did. Kimmy created the “Greemulax” books to try to make the world a better place, and she did it. She got her happy ending by giving happiness to others.

Watching the first half of Season 4, it felt like this show had started to run out of things to say. But the back half made it clear that “Unbreakable Kimmy Schmidt” could have gone on, at least a little longer. There’s loose talk that the cast could one day assemble for a follow-up film, but right now this is the ending we have, and the last moments wrap things up with just the right tone — the beautiful fairy tale music playing out as the words “The End” appear…

…and then, with a burst of the theme song: “Damnit.”

“Unbreakable Kimmy Schmidt” is now available to stream in its entirety on Netflix.