Berlinale: François Ozon might be known for his kinky thrillers, but his journalistic "Spotlight" riff nails the Catholic Church to the cross. 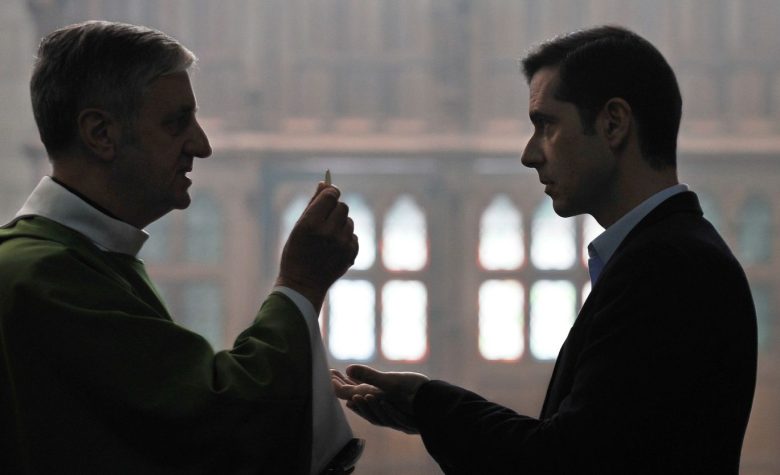 However reductive it might be to frame “By the Grace of God” as a French riff on “Spotlight,” that’s exactly what writer-director François Ozon was hoping to make when he decided to make a film about the ongoing trial of Lyon-based Cardinal Philippe Barbarin, who stands accused of covering up the fact that a charismatic priest in his dioceses has been sexually abusing children for more than 30 years. More to the point, that’s also exactly what Bernard Preynat’s victims asked Ozon to make for them.

Not a documentary exposé, as the filmmaker once intended, because that would do little more than reiterate the facts these brave men have already worked so hard to disseminate through the media. And certainly not a psychosexual thriller in the vein of Ozon’s previous work, as it’s easy to imagine how this story might not be well-suited for someone whose most recent film was a kinky slice of Euro-sleaze about a woman who starts having acrobatic sex with her therapist and his secret twin brother. No, this would have to be a sturdy portrait of everyday heroism — a sober but compelling drama that rewarded its real subjects by casting famous movie stars to play them on the big screen. Ideally, it would almost feel American.

Unexpected as it might be, that’s what Ozon delivers; during a crucial scene towards the end of the film, a “Spotlight” poster can even be seen hanging on the wall of a police station. A thoughtful, fast-paced, and immaculately acted procedural that unfolds with the urgency of a newspaper deadline, “By the Grace of God” zips through the facts of this horrid case, while also shaping them into a lens through which to examine the uneasy relationships between mercy and justice — between faith and the flawed institution that exists to preserve it. 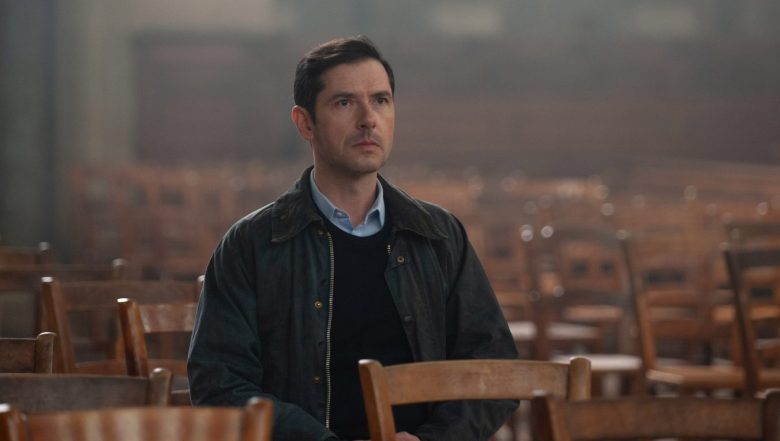 The story begins with a handsome Lyon banker called Alexandre Guérin (he’s played by “Laurence Anyways” star Melvil Poupaud, and — like all of the victims in this film, the character’s last name has been changed in order to provide Ozon a degree of creative license). Alexandre has a loving wife (Aurelia Petit), five curious kids, and an enduring closeness to God despite his reasonable doubts about the Church. Despite his outward stability, however, Alexandre is spiraling within seconds of the opening credits; all it takes to set him off is a newspaper headline informing him that the priest who abused him as a child is still working with pre-teen parishioners. That revelation ignites almost 45 minutes of breathless epistolary action, as Alexandre and local church officials launch into a volley of emails that reach into the darkest corners of his past (the actors read many of these actual messages verbatim over the soundtrack).

Alexandre feels a queasy need to meet with Preynat (Bernard Verley), the now-71-year-old priest who repeatedly abused him at a church summer retreat in the late ’80s. Preynat agrees. Alexandre confronts the man who caused him so much pain. A high-ranking Church representative sitting right there in the room beside him, Preynat admits to what he’s done. With a twinge of profound regret, the disgraced priest self-identifies as a pedophile, professes his great regret, and cries that he’s never been able to solve his attraction to young children. But that, alas, is just the beginning of the story.

It’s one thing for the Church to know of Preynat’s guilt, and quite another for the institution to do anything about it. The priest, after all, is a beloved member of the community, and the Church only has a legal obligation to report someone for sexual abuse if the victims are minors at the time the allegations come to light (a sinister rule considering that survivors often wait decades before sharing details of their experience). The Church would rather relocate a deviant priest than defrock him; there are services to lead, confirmations to perform, and a rigid calendar of events that forces Catholic life into constant orbit around houses of worship. And the Church might be the only authority that can still weigh in on the matter, as France’s statute of limitations expires after 30 years in these cases.

But times are changing. For one thing, “Spotlight” won Best Picture for exposing similar practices in Boston. For another, Pope Francis is more committed to eradicating the scourge of sexual abuse than his predecessors ever were. Victims are growing more difficult to shame into silence, and Alexandre is prepared to share his truth even before he learns that Cardinal Barbarin (François Marthouret) was aware of Preynat’s ghastly predilections from the beginning. In the drop of a hat, he becomes a man on a mission, rededicating his life to bringing Preynat to a certain kind of civilian justice; Alexandre may lack the professional experience of the Boston Globe’s most dedicated team of reporters, but he has more than enough skin in the game to make up for that. And he’s not going to have to do it on his own — regrettably, he was far from Preynat’s only victim. 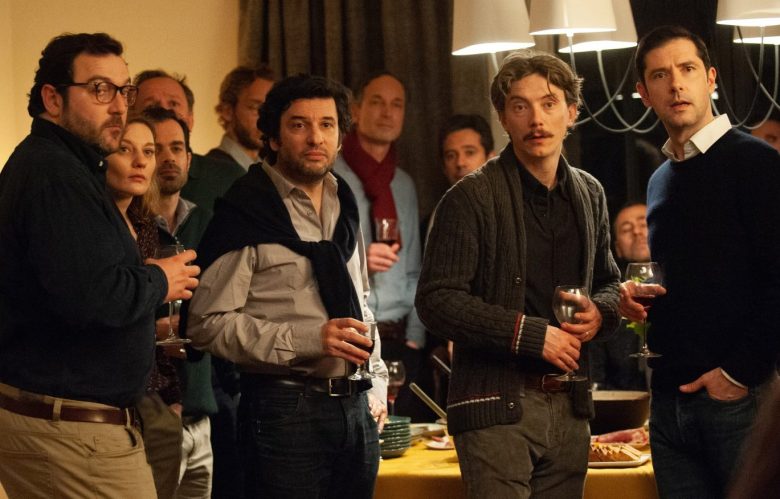 The story widens fast enough from there, as Ozon fractures the case against Preynat into a tripartite narrative that’s passed from one character to another like the baton in a relay race (to use the director’s own analogy for the structure of this script). And that race is often run at a dead sprint, as “By the Grace of God” largely unfolds with the dogged relentlessness of a hungry journalist. This is a film that’s more interested in asking questions than it is in answering them; that’s more eager to throw hurdles in front of its characters than it is in investigating how they managed to clear them. Should Alexandre be mustering the strength to forgive Preynat, or would that put him in his abuser’s permanent thrall? Is it tenable for a serious Catholic to believe in God, but doubt (or even condemn) the church? Is it possible for a holy institution to shed its skin in order to save its soul?

In a movie about the need for people to face their fears — about how someone might successfully wage a holy war against a sacred religious order — it stands to reason that Ozon would privilege logistics over emotion. And while it feels like a missed opportunity that Alexandre is never given a more explicit chance to reckon with his faith on a more abstract level, Alexandre is freed of that burden when he sparks a fire in some other survivors and the brunt of the story is shifted to François Debord (a wonderful Denis Ménochet). A jocular and darkly funny guy who’s been a devout atheist since the day Preynat laid his hands on him, François wears his heart on his sleeve, and begins to rally other victims to the cause. While he and Alexandre are seldom in the same place together, everything François does points back to the man who inspired him; amidst the freight-train like rush to find survivors within the statute of limitations and expose the cover-up, Ozon spins a palpable web of strength between his characters, so that even the most fragile among them can find the superhuman resolve they need to relive their trauma.

Emmanuel Thomassin (a clenched and commanding Swann Arlaud) is nothing if not the most fragile among them. A violent epileptic who may have suffered permanent physical damage from his childhood encounters with Preynat, the chronically unemployed Emmanuel can’t even read a headline about the priest without convulsing on the floor. Ozon accommodates the character’s needs, the camera shortening its focus and adopting the heightened stakes of a melodrama. Without deviating from the mission at hand, or taking its focus away from Preynat and Cardinal Barbarin, “By the Grace of God” is nevertheless attuned to the many different ways in which sexual trauma can burrow into and hollow out those who have to live with it. The differences between these three main characters do as much to galvanize their cause as their shared experience.

Ozon is less confident about how to handle Barbarin, whose spiritual crisis will ultimately be at the center of this story when it returns to headlines with the Cardinal’s trial next month. Marthouret is wracked and brilliant as a man who’s tragically allowed his faith to erode his morality, but Ozon doesn’t want to risk any sympathy for the devil, and shuns Barbarin to the background of a cover-up that will always come back to him. “I’m doing this for the church,” one of the victims explains. “Not against it.” We suspect Barbarin would argue the same. “By the Grace of God” doesn’t leave any room for doubt that the Cardinal is in the wrong. Fingers crossed, Ozon’s damning and deeply watchable film will help the church recognize that it needs to purge itself of this sin for its own survival.

“By the Grace of God” premiered at the 2019 Berlin International Film Festival. It is currently seeking U.S. distribution.

This Article is related to: Film and tagged Berlinale, By the Grace of God, François Ozon, Reviews