Exclusive: "Maniac" star Ariel Kavoussi makes her directorial debut with a feminist riff on Jean Eustache's 1973 film "The Mother and the Whore." 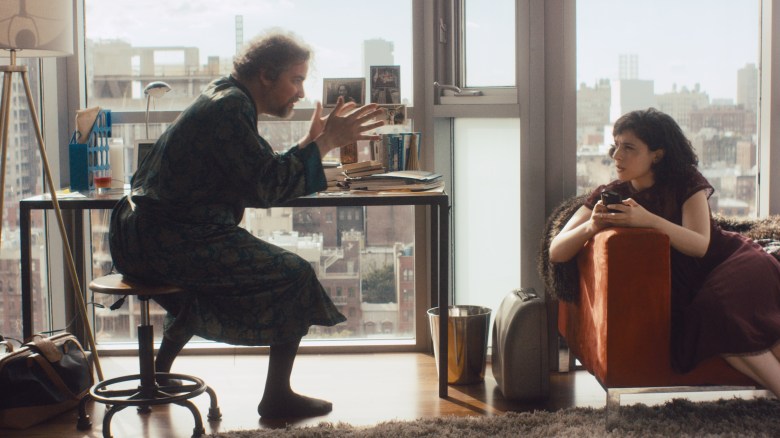 Kevin Corrigan and Ariel Kavoussi in “The Poet and the Professor”

First-time filmmaker Ariel Kavoussi hit upon a very relatable idea when she began working on her debut film: why not twist the trope of the mediocre white man into something a bit more satisfying? She turned her fantasy into reality (or at least, something close to it) in “The Poet and the Professor,” a short film starring Kavoussi as a woman stuck in a love triangle with two pathetic older men, played by Kevin Corrigan and Bob Byington. The film’s title is a reference to Jean Eustache’s 1973 film “The Mother and the Whore,” and also features a love triangle as its narrative core. By inverting the genders and centering her (deeply flawed) character, Kavoussi has made a truly absurdist, provocative, and contemporary feminist film.

“When we first met to talk about this project, [Kevin Corrigan] asked if he really was going to have to hit me for the first sex scene,” Kavoussi said. When Kavoussi said yes, Corrigan know just how to put her at ease. “Kevin took a moment and then proceeded to tell an anecdote about how he was actually hit in the face during the filming of Martin Scorsese’s ‘Goodfellas.’ He was not here to make me self-conscious, just the opposite. He was talking to me with respect — professional to professional.”

Aside from being written and directed by Kavoussi, “The Poet and the Professor” features women producers, editors, designers, and crew members. To shoot the film, Kavoussi chose cinematographer Charlotte Hornsby, whose work has taken home the Sundance Film Festival’s top shorts prize two years in a row. “Leading up to this project, I knew it would require me to make myself pretty vulnerable,” Kavoussi told IndieWire. “By bringing an entirely female creative team on board I was able to create the kind of environment where I could feel relatively at ease while working on material that was quite sensitive and personal to me.”

Kavoussi will be recognizable to audiences from turns in Onur Tukel’s “Catfight” and Cary Fukunaga’s Netflix series “Maniac.” With her distinctive voice, she is a unique presence onscreen, and has forged success despite the fact that it is exceedingly rare that Hollywood writes roles for actresses who don’t fit a certain mold. By taking matters into her own hands, she has written a complicated, autonomous, and sexually voracious character who looks nothing like anyone else onscreen — and everything like an actual millennial.

The Ariel character is attracted to emotionally (and often physically) unavailable older men, a nod to Kavoussi’s own dating life. By casting older men in the roles, she was able to utilize name talent like Corrigan and Byington while also managing to flip the typical power dynamic yet again.

“I was really excited about the idea of directing men who were significantly older because of what it means politically and culturally,” she said. “I’ve watched hundreds of movies where a 45-year old man directs a 22-year old female ingenue. This was my chance to turn the tables.”

Corrigan’s character is a cinematographer who is shooting a commercial with Wes Anderson and dabbling in screenwriting, who may be uncomfortably familiar to many in the film industry. In her final tirade against her loser lover, Ariel screams at him: “You are a fucking hack. The only fucking reason you’re working on that Wes Anderson thing is because we live in some fucked up, patriarchal world that celebrates men for being boring assholes! You will never make an original film because you fucking suck!”

It’s a cathartic moment for the character, and for anyone who has watched mediocre men succeed in place of a talented woman.

This Article is related to: Film and tagged Ariel Kavoussi, Short Films