The actress visited the IndieWire Studio presented by Dropbox while unveiling the film at Sundance. 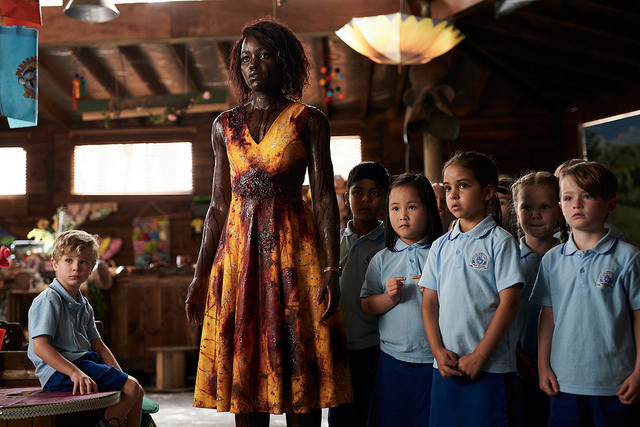 Lupita Nyong’o has done a lot in her brief career, from winning an Oscar for her debut performance in “12 Years a Slave” to joining “Star Wars,” but she’s never made an Australian zombie movie that premiered at Sundance — until now. The actress stopped by the IndieWire Studio presented by Dropbox while unveiling “Little Monsters” at Sundance, discussing not only her character in Abe Forsythe’s genre offering but also her interpretation of its thematic underpinnings. The film, which played in the Midnight section and was acquired by Neon and Hulu at the festival, co-stars Josh Gad and Alexander England, who joined Nyong’o and Forsythe in the Studio.

Nyong’o plays Ms. Caroline, whom she describes as “a kindergarten teacher that finds herself on this farm with 11 students and a hapless, rubbish, parent — what do you call those people, parent guardian? — they find themselves on a farm, and this zombie apocalypse is happening, so Ms. Caroline has to try and keep the children away from the trauma of the zombies and kind of preserve their innocence. Her aim is to preserve that innocence by keeping away all dangers, both inside and out.”

The issue of monsters coming both from within and without was echoed by co-star Josh Gad, who plays a children’s performer who doesn’t actually like children. “Protect these kids and preserve the bubble that all of this is supposed to be happening and that all of this is actually part of a game, and that’s a lot for them to have to handle — especially as the threat throughout the movie escalates,” Gad said, making the film sound like a zombie equivalent to “Life Is Beautiful.”

Watch the full conversation, which touches on such influences as “They Live” and even “Okja,” below.

This Article is related to: Film and tagged Little Monsters, Lupita Nyong'o, Sundance