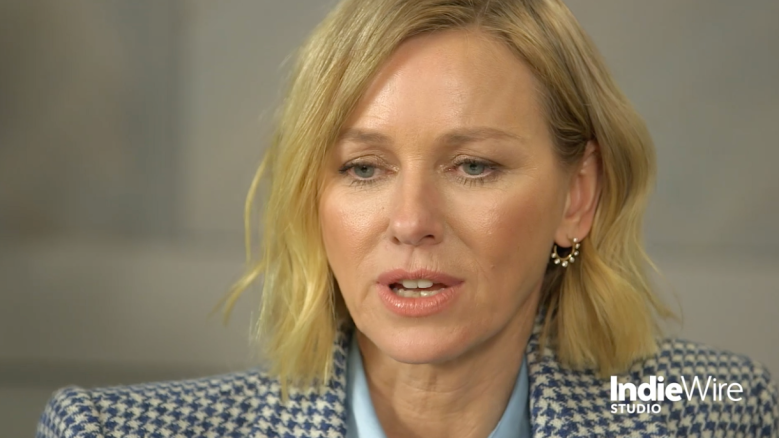 For his moody thriller set during the famous New York City blackouts in the summer of 1977, “The Wolf Hour” director Alistair Banks Griffin had one goal at the top of his list: “We had to capture the humidity, that was my first note.” The director and his two illustrious lead actresses, Naomi Watts and Jennifer Ehle, paid a visit to the IndieWire Sundance Studio, presented by Dropbox, during the 2019 festival. Watts, who plays an agoraphobic writer named June in the film, shared the secret to nailing the sweaty blackout look: “We were covered in Vaseline. Every day.”

“Color palette was the second part of that equation. Really just feeling this heavy, layers of paint and dented plaster,” said Griffin. “Every inch of the set was worked over to make it feel like that moment. I go back and look at a lot of great ’70s cinema, too, and kind of putting it in that canon.”

“For me, June is someone that, she’s shut herself in for a period of time now and she’s managed to make it work in such a way that she’s in a comfort zone that she can handle,” said Watts of what drew her to the role. “I think anyone has probably experienced a level of anxiety or depression, she’s going through that in an extreme way.”

Ehle was immediately drawn to the script, sharing an anecdote about reading the entire script standing up. “For me, it was the piece as a whole and responding to June’s character, and being a huge admirer of Naomi’s,” said Ehle.

Watch the full interview below.

“The Wolf Hour” premiered January 26 at the 2019 Sundance Film Festival.

This Article is related to: Film and tagged Jennifer Ehle, Naomi Watts, Sundance, The Wolf Hour