From near-deaths and cats to mirrors and falls, here’s why the Netflix series references Lucy Maud Montgomery’s gothic novel. 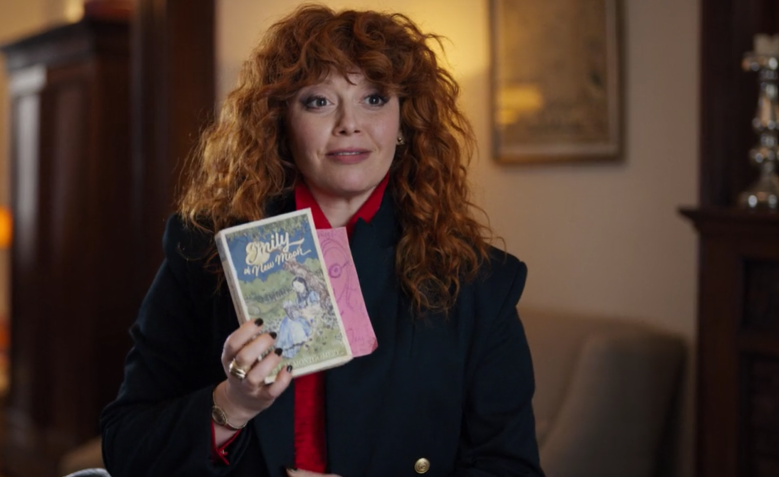 [Editor’s Note: The following contains spoilers from “Russian Doll” and the “Emily of New Moon” books.]

“Fucking clues abound,” Natasha Lyonne’s character Nadia says in one of the iterations of her life in Netflix’s “Groundhog Day”-esque “Russian Doll.” One of those biggest clues to Nadia’s macabre, existential adventure lies in the young adult novel “Emily of New Moon.”

In the series, Nadia dies over and over as tragic accidents befall her, but she always resets alive and well in the same bathroom during her 36th birthday party. In the fifth episode, she makes an attempt to try to correct past wrongs and reconnect with her ex-boyfriend by giving a copy of the book “Emily of New Moon” to his teenage daughter. Written by Lucy Maud Montgomery, the same author as the “Anne of Green Gables” series, this book also centers on a young orphan girl in turn-of-the-century Prince Edward Island.

“Everybody loves Anne, but I like Emily. She’s dark,” says Nadia. In one of the reset timelines, she hands the book over to the daughter and says, “It’s not really a present, it’s more like something that we share… Emily is the hero.”

On the surface, young Nadia’s upbringing is similar to protagonist Emily Starr’s. They both have to deal with troubled childhoods — Nadia’s mother was unbalanced and dangerous, while Emily’s father dies when she’s 10 — and are raised by people other than their parents. But it’s Emily’s entire gothic and melodramatic journey into adulthood – “Emily Climbs” and “Emily’s Quest” round out the book trilogy — that offers the most insight into “Russian Doll.”

After all, as Nadia’s adoptive Aunt Ruth (Elizabeth Ashley) points out, “Holding two incompatible ideas in your head at the same time and accepting both of them, well, that’s the best of being human. Right now I’m looking at you as you are today while also looking at you as that peculiar little girl I knew.” Nadia’s visions of herself as a young girl prove to be one of the keys to solving her problem.

Although Emily does not experience Nadia’s looped timelines, she does have “second sight” — a type of clairvoyance she apparently inherited from her grandmother — that creates bizarre situations similar to Nadia’s in which she has access to information that other people do not. For example, at the end of “Emily of New Moon,” she has a trancelike fever dream in which she draws a house where a missing boy has been trapped and therefore saves his life. Nadia also tries to save a couple friends’ lives after experiences in other time loops. One vision in particular feels relevant to the “Russian Doll” finale when Nadia realizes that both she and fellow looped-timeline traveler Alan (Charlie Barnett) have returned to the point that they’re supposed to save each other’s lives. Unfortunately, they’ve reset into separate timelines apart. This means she’s supposed to somehow convince this alternate Alan – who’s never met her – to not kill himself, while Alan is trying to prevent an alternate Nadia – who’s never met him – from getting hit by a car. This is the ultimate test of trust in their connection, and only by truly accepting their attachment and dependence on each other do they succeed against all odds.

In Montgomery’s books, Emily’s ability to save her longtime friend Teddy’s life also relies on a psychic bond and trust. But instead of overcoming different timelines, she must overcome a great physical distance. From her home in PEI, Emily falls into a trance and finds herself in a busy station where she sees Teddy and realizes he’s in some kind of danger. She has him follow her through the crowd until she wakes abruptly from the vision. Only later does she receive a letter from him – from across the Atlantic in England – that reveals he was about to buy a boat-train ticket so he could sail on a ship home, but then he followed the vision of her until he missed the train. The ship he planned to sail on was reported to have hit an iceberg and sank.

“[I] came to my senses to realize that the boat-train had gone and I had lost my passage on the Flavian. I was furious – ashamed – until the news came. Then – I felt my scalp crinkle,” Teddy writes. “It can’t be possible you are in England. But then – what was it I saw in that station? Anyhow, I suppose it saved my life… I’ll be home soon. Will sail on the Moravian – if you don’t prevent me again.”

This psychic bond – and Teddy’s incomprehensible trust in his Emily vision – is what saves his life. And although it takes some convincing, eventually Nadia and Alan’s connection also save each other’s lives and their own. 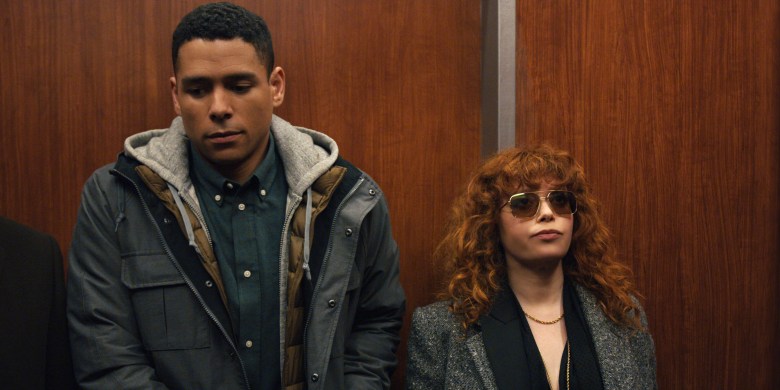 Throughout the series, Nadia and Alan come to a number of unsavory ends ranging from gas explosions to bee allergies, but it appears that falling is the untimely fate that Nadia meets the most. She takes multiple tumbles down the party stairwell – to the point that she prefers to descend from the fire escape and also becomes a sly punchline when an unrelated character notes that women prefer elevators to stairs. She also falls down basement grates multiple times and perishes with Alan in an elevator the first time she meets him. In contrast, Alan has only fallen once on his own – when he jumped to his death in his first timeline.

It just so happens that the “Emily” novels are also preoccupied with people falling in dramatic circumstances. Emily herself slips off of a cliff and hangs on for dear life while she’s contemplating another person’s death, and in another unfortunate episode, she tumbles down the stairs, gets pierced by sewing scissors, and almost dies from blood poisoning as a result. This is almost Nadia-like in its specificity.

It only gets more gruesome from there. In yet another incident of second sight, Emily has a dream that ends up being a memory of an unknown incident in the past. Her best friend Ilse had always thought that her mother had abandoned her as a baby to run off with another man whose ship sank (yes, another sinking ship!). This has caused Ilse’s father to not trust women, including his own daughter, for decades. Emily’s vision reveals that Ilse’s mother had in fact fallen down a well while returning home, and by uncovering her remains, they finally clear her name.

Only by coming to terms with a misperception of the past, are these parties able to move on with their lives in a healthy, positive way. Ilse’s father finally is able to forgive his wife, who was never cheating on him. And Nadia has to forgive herself for not sticking by her mentally ill mother, who was never going to be a proper parent. This also comes to a head with the next theme about identity below.

Like Anne Shirley of the “Green Gables” books, Emily was so lonely growing up that she made friends with her own mirrored reflection. But once she moved to New Moon Farm, the “Emily in the glass” she knew was left behind because the mirrors were at a different height and seemed to give off a slightly different reflection in her new home. She had to grow up and move on, which was literally reflected in the glass.

Mirrors, reflections, and how one perceives one’s identity or narrative also comes up multiple times in “Russian Doll.”  In one scene, Aunt Ruth recounts an incident from Nadia’s past to Alan. “Don’t get me started on the mirrors,” Ruth says. “One day, [Nadia’s mother] shattered them, and when I came to take Nadia to school, the mirrors were gone and there was glass everywhere.”

“Why mirrors?” Alan asks. “Reflection, proof of existence, another pair of eyes,” Ruth explains. “That’s why therapists are important. Without them, we are very unreliable narrators of our own stories.”

Both Alan and Nadia come back to life in the same place – in front of their respective bathroom mirrors, and Nadia knows something is going wrong when the mirrors begin to disappear from her timeline. Like Emily, it’s up to her to adjust what she perceives her next steps to be. The ultimate example of how not reflecting on the past or relationships can haunt her occurs during her diner death, right after she gives the girl Lucy (Tatiana E. Rivera) a copy of “Emily of New Moon.” Nadia begins to cough up blood and eventually… a shard from a mirror emerges from her mouth. Not dealing with the reality of her crappy mother is hurting her in the most literal way possible.

Even the womanizing literature professor Mike (Jeremy Lowell Bobb) is affected by a loss of reflection. When Alan bursts into the philanderer’s office, pummels him, and then shatters a mirror, Mike is left visibly flustered. He asks his student how his face looks and adds, “The mirror’s gone. I can’t tell.” Even though he’s unwilling to admit it, the attack makes him reflect on his part of the infidelity by sleeping with Alan’s girlfriend and the hurt he had caused. If he is to accept the ladies’ man side of himself, he also needs to accept the morally grey side of himself in the partners he chooses. 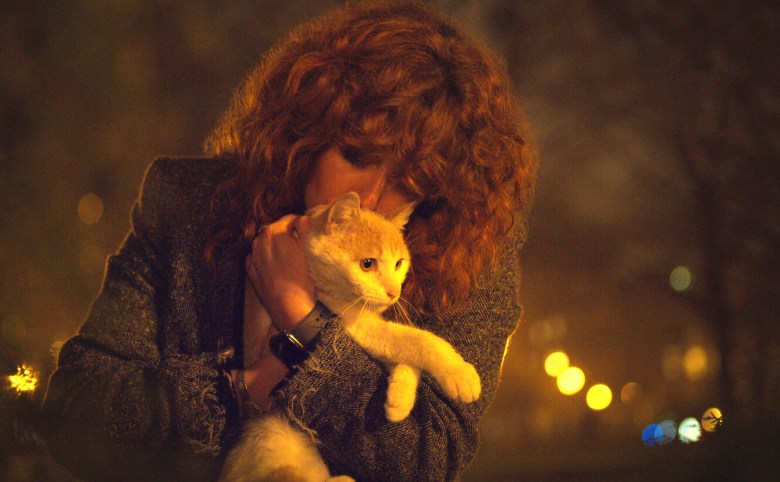 In “Russian Doll,” the first thing that Nadia notices is wonky is that her cat Oatmeal is missing. Spotting him across the street is also what causes her first death when she runs into the road without looking. When he literally vanishes from her arms, she can’t deny that something very unusual is happening to her. The eventual return of Oatmeal to safety in the finale is essential to understanding that the looped timelines are about to end.

Cats are also symbolic of home and stability in “Emily of New Moon.” When Emily is adopted by her two aunts, she’s only allowed to take one of her two cats. Although she is fond of Mike – who’s fat, friendly, and comfortable to hug – she leaves him behind because she knows that the hired woman also will care for him. Instead, Emily takes the skinnier and scrappier Saucy Sal, who is less comforting but needs her more. Emily understands that attachment is necessary to own a cat, and by extension, create a homelike environment. Together, she and Saucy Sal are the awkward newcomers to New Moon Farm.

When Nadia tells Lucy that Emily is the hero, that this is something they both share, it is to acknowledge how they’ve both had to be strong in childhood since Lucy is also dealing with her own fractured family. They also share the same rebelliousness and irreverent sense of humor, as exhibited when Lucy flips Nadia off through the diner window. “Your kid just gave me the finger,” Nadia says. “She’s perfect!”

Lucy may not have an Oatmeal or Alan or even Aunt Ruth analogue, but she does have “Emily of New Moon” and what that symbolizes. Through likeminded connections, Lucy doesn’t need to struggle alone.

”Russian Doll” is available to stream on Netflix.

This Article is related to: Television and tagged Emily of New Moon, Netflix, Russian Doll