Natasha Lyonne and Leslye Headland get deep with IndieWire about matters of life, death, and "Groundhog Day." 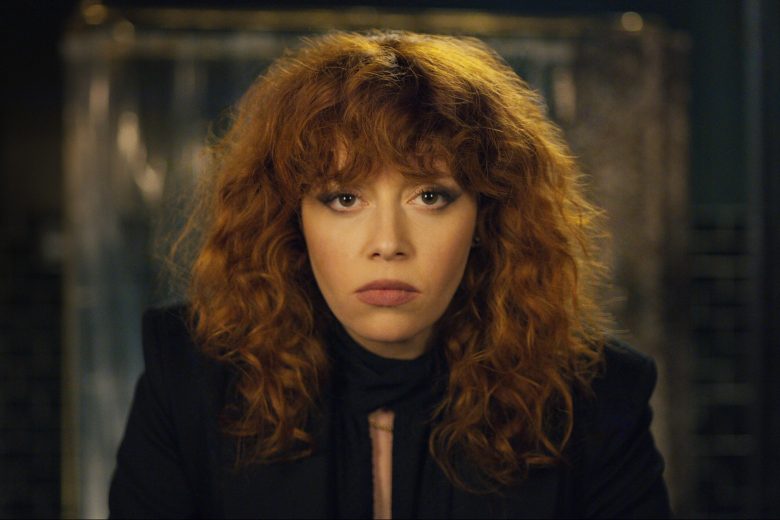 It takes eight episodes of repeatedly dying for Nadia (Natasha Lyonne) to learn how to live. That’s the basic premise of “Russian Doll,” the new existential Netflix dramedy created by Lyonne, Amy Poehler, and Leslye Headland.

Directed by Lyonne, Headland, and “But I’m A Cheerleader” helmer Jamie Babbit, the show boasts a compelling supporting cast, including Chloe Sevigny, Elizabeth Ashley, Rebecca Henderson, and Charlie Barnett as Alan, another person who shares Nadia’s complicated relationship with life and death. But more importantly, it’s filled with huge ideas that came from years of big sky conversations between friends.

For Lyonne, “Russian Doll” is a deeply personal story that reflects her complicated relationship with living in this world. As she told IndieWire, “Big and small, we’re constantly struggling with that dynamic of ‘How do I go on participating in life?’ It’s kind of a moment-to-moment choice to not check out and to stay on the bus. I think that became a through-line for most of the characters in ‘Russian Doll’… they’re very different people that are having a similar dance they’re having to deal with.”

Below, Lyonne and Headland reveal the show’s idiosyncratic development process, why they made an effort to keep the premise a secret for as long as possible, and how audience reaction to the first season might affect their plans for a potential Season 2.

“Wow, This Is Totally Bonkers”

The roots of “Russian Doll” began in 2014, when Lyonne and Poehler worked together to create a TV show called “Old Soul.”

“[Amy] called me one day out of the blue and she said, ‘I feel like you’ve always been the oldest girl in the world,’ and I said, ‘Thank you,'” Lyonne said. “I wasn’t sure if that was a weird compliment or an insult. And she said, ‘What if we made a show together that was kind of based on that idea?'”

“At the time,” she continued, “I was spending most of my time with Tyne Daly at her poker nights,” and that dynamic became the inspiration for “Old Soul,” which starred Lyonne alongside Ellen Burstyn, Fred Willard, and Rita Moreno (with “High Maintenance” star Greta Lee playing Lyonne’s best friend, as she also does in “Russian Doll”). While the series never made it past the pilot stage at NBC, it led to Lyonne and Poehler talking about “what would be our fantasy show — if it was really lawless and there was no network. What were we really trying to say here?”

Out of those conversations evolved “‘No Exit’ meets ‘Groundhog Day.'” But Lyonne’s larger inspiration was a movie she strongly identified with on a personal level: Bob Fosse’s “All That Jazz.”

The 1979 film, a semi-autobiographical tale about a famous director and choreographer on the verge of self-destruction, spoke to Lyonne, whose own issues with addiction had led to a serious medial scare. “It’s a story of a man who was in his hospital bed on death’s door, looking back at his life and trying to make sense of all the places he went wrong and all the things that were majestic and unjust about life in general.”

That, plus a Richard Pryor film called “Jo Jo Dancer, Your Life Is Calling” and the Michael Gambon-starring British drama “The Singing Detective” came together to help Lyonne process her “own personal junky-dom,” and subsequently what she and Poehler wanted “Russian Doll” to explore.

At a certain point, Poehler and Lyonne began involving Headland in their ongoing conversations, after Lyonne worked with the director on her 2015 feature “Sleeping With Other People.” Headland, in fact, can’t say when exactly she officially came onboard the project. “It was just one of those things where every time we hung out, we would talk about this phantom show. Like, ‘Oh, my gosh. Wouldn’t it be great if there was a show that was about a woman that wasn’t about her career or a guy or her kids or…?’ Like, what if there was a show with a female protagonist that was just kind of an existential, spiritual, relationship-based — meaning like a true relationship between humans — show?”

The key, though, was ultimately the basic premise: “Oh, she keeps dying. She’s physically dying and coming back and being at this party,” Headland said. “That was when it kind of clicked as like, ‘Oh, we should come up with a pitch for this and then really pitch it to Andy at Netflix.’ And they really took a chance on it. They were really like, ‘Oh, wow, this is totally bonkers. This is not going where we think it’s going to go, and so on and so forth.’ They really embraced it and jumped on board.'”

“What Is This, Exactly?”

In the weeks leading up to release, the only plot description offered by Netflix was, “‘Russian Doll’ follows a young woman named Nadia on her journey as the guest of honor at a seemingly inescapable party one night in New York City” — a deliberate choice by the creators, in order to keep the premise as vague as possible for viewers, making it all the more surprising when Nadia’s first death happens.

“I know it’s wild when you walk in,” Lyonne said. “It’s an interesting experience to really be on the ground floor with as a creator, because you feel protective about keeping people’s experiences of it pure.”

Headland said they realized they wanted to keep the premise as under wraps as possible “when we started getting a response to the pilot, in which she dies on page 10 or 15 or whatever it is. They kept coming back and saying like, ‘Oh my god, we were so surprised.'”

“That’s an aspect of the show that we can’t really hide anymore,” Headland said. “Once the trailer comes out, people will understand that that’s the premise of the show. They won’t know, basically, what happens from Episode 4 on. None of that is gonna come out. But that premise will eventually be something that people know about.” 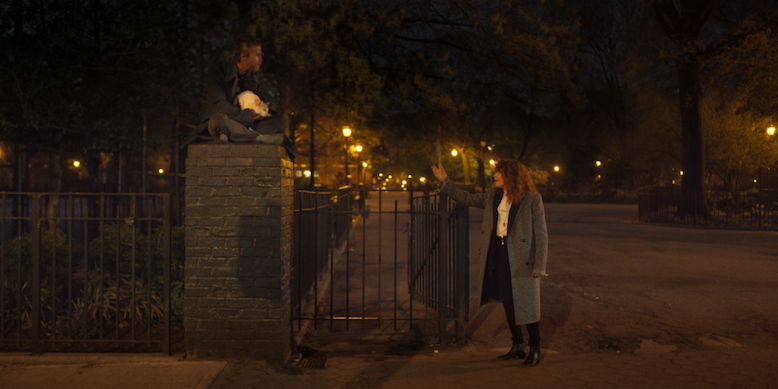 “I think that audiences are pretty sophisticated,” Lyonne said. “And I think hopefully the show is dense enough that there’s stuff that will still be able to hit in waves in its full context. I think that it is really a show that’s built to be watched as a four-hour movie, so I think it’ll jive well with the modern viewing methods.”

Headland gave full credit to Netflix for allowing them to tease out the premise. “They really do believe in another aspect of that audience-curated experience of art,” she said. “Like, the audience that wants to watch this will find it, and they will be advocates for it. So it’s less about ‘How do we sell everybody on this idea?’ and more like, ‘Let’s pique their interest enough so that they come in and make the decisions for themselves and discover it for themselves.’ And that’s super-exciting.”

Being compared to “Groundhog Day” didn’t really bother Headland. “It’s definitely something that I end up referencing, but I also feel kinda confident referencing it because I’m like, ‘Yeah, but then it doesn’t go that same way. It becomes something else. It turns into its own thing for its own audience.'”

“You Can Always Go Deeper”

When it comes to Season 2 and beyond, Headland says they’ve already pitched multiple seasons to Netflix, but she also wants to see how viewers react to the first set of episodes.

“That’s what I love about Netflix, too, is that you get the experience, in real time, of the audience reaction,” she said. “So I’ll get immediate feedback in a way that, for my films, you don’t. […] We’ll know within that first week what are the aspects of this world that people are really responding to. What are the things that feel like they’re popping and working, and what are the things that maybe aren’t?”

This is something Headland feels may become a bigger aspect of making content in the modern era, pointing to the Netflix comedy “Friends From College” as one example. “They came back for Season 2 with a different vibe,” she said. “I wouldn’t want to speak for the other creators, but I think that is sort of where we’re headed in a certain way is a little bit of that crowd-sourcing the reaction.”

“It’s not unlike feature films,” she said. “You go and you do a test-screening and you get feedback of ‘We liked this character, we didn’t like this character,’ or ‘We didn’t like this moment.’ And sometimes you’re like: ‘Yeah, you weren’t supposed to like that moment. That’s a really upsetting moment. We’re not gonna change that just because you didn’t like it.’ But you do get a sense of: What are people really following? What are people really responding to?”

“I’m of the mind of that Billy Wilder quote, ‘People are stupid, but as a group, they’re brilliant,'” Headland said. “I do kinda feel like you wanna listen to the majority reaction to your work — otherwise, that’s just one other thing you’re not utilizing as an artist that’s in your toolbox.”

Lyonne said while she was happy the ending of Season 1 has some resolution, “I have some ideas that are pretty out there for what the next season would be. The show certainly has some legs for more bizarre scenarios.”

Headland said that of what they discussed in the beginning, “I think a lot of it is on the screen. I think a lot of it’s there. And then I think there’s a lot of stuff that we definitely discussed, whether it’s future stories, future seasons. There’s definitely more, I think, like a Russian doll. You can always go deeper.”

For Lyonne, Nadia’s journey reflects her own experience facing down addiction: There’s meaning within Season 1’s ending, but it’s not the end of the journey. “This concept was based on an exploration of one woman, who does deeper and deeper searches into herself,” she said. “I think in many ways this first season is an admittedly dense, but in many ways topical, version of her. It’s closely drawn to my own life experience, but I think that, now being many years away from that, I can see that there are so many more layers to go down.”

“There’s still hopefully quite a lot of life left,” she continued, “after you’ve decided to sign on the bus and join the human race in the first place.”