His commitment to post-mortem authenticity knows no bounds. 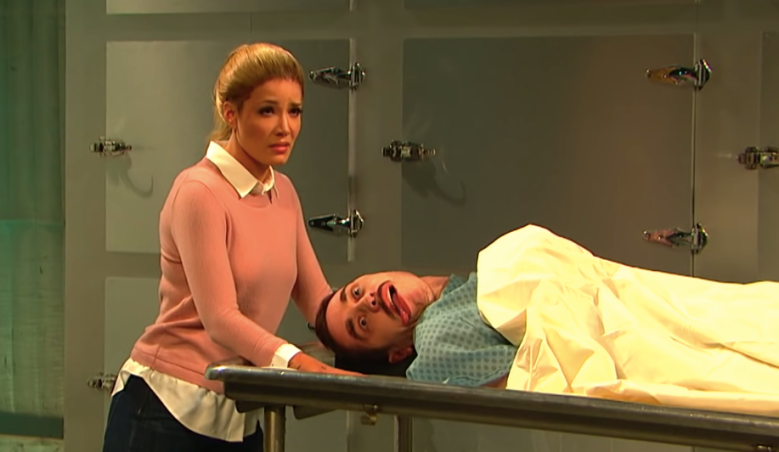 Pete Davidson usually shows up on “Saturday Night Live” as a “Weekend Update” correspondent, but last night he showed his range by playing a corpse instead. The comedian showed up during a “Riverdale” skit, taking the spotlight away from Betty and Jughead during the season finale “Text Me Deadly” — much to the chagrin of the episode’s director (Kenan Thompson).

“Excuse me, actor on the gurney, are you all right?” asks said helmer after Davidson’s first distraction.

“Oh yes, I’m good if you’re good,” he replies in a hard-to-place accent. The director isn’t good, and so the thespian explains that he’s making “just everyday corpse sounds — you know, the usual hisses and moans you get from gas escaping the body.” Then he introduces himself as Lionel Rodgers, adding, “I play corpses.”

“So I’ve been dead, what, two or three days? Great, so I’d still be releasing a lot of gas, right? I’ll give you some groans, some toots, so you’ll have options,” he continues. Told that’s unacceptable, he refuses to stand down. “Ah, I see — so you want this to be a totally inaccurate depiction of a dead body?”

Read More: ‘Riverdale’: 8 ‘Carrie’ References You May Have Missed From the Musical Episode

Having been effectively muzzled by the director, Lionel then begins convulsing wildly in the next scene “the way a normal corpse would with no way to expel gas.”

At least the actors are into it — Betty “is kind of digging the authenticity,” while Jughead can tell Lionel has done his research. And it’s true: He spent three months living in a morgue, albeit for rent-related reasons. Watch the full skit below.