Annie and ADG winner, Justin Thompson, was the architect behind the trippy "Into the Spider-Verse," which appears destined for Oscar glory. 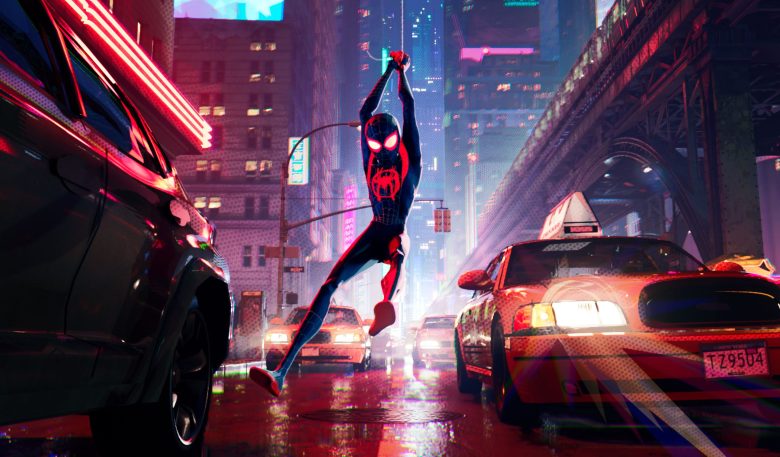 “Spider-Man: Into the Spider-Verse” is on quite an awards roll (sweeping the animated VES categories for VFX on Tuesday), and so is its architect, production designer Justin Thompson, who last weekend picked up Annie and Art Directors Guild nods for his innovative work.

Oscar glory still awaits, but it all began with a vision by producers Phil Lord and Chris Miller to make an experimental moving comic that introduced Miles Morales — the first Spidey of color — while breaking the rules of animation at Sony Pictures Imageworks.

And the producers recruited their go-to production designer to help execute their ambitious vision: “As somebody obsessed with comics my whole life, I had seen films translated from comics and I always thought something got lost in the translation,” said Thompson. “So I thought it would be amazing to make a movie from Miles Morales’ point of view, living inside a comic book and staring out at me: those Ben-Day dots, those screen tones, those offsets, the line work.”

In initially consulting with Danny Dimian, Sony’s VFX supervisor. Thompson came up with a wild wish list of visual ideas: Remove the motion blur, simulate rays of light, have key offsets that track with a character like rack focusing from foreground to background. “And Danny said that’s really hard and he didn’t don’t know how to do that, and I said that’s why we have to invent it,” added Thompson. “And that was my relationship with Danny: Coming up with cool ideas that I wanted to see on screen.”

But first Thompson envisioned the naturalistic world of Morales in the warm comfort of Brooklyn, before web-slinging into the weird supernatural world of the Spider-Verse. His home, meanwhile, reflected the cultural diversity of his heritage, living with an African-American father (Brian Tyree Henry) and Puerto Rican mother (Luna Lauren Velez).

“I wanted to make sure that the home felt just as eclectic as their family, and so every piece of furniture is a different color, a different style, and the walls are all painted differently,” Thompson said. “It’s a celebration of their life and its inclusiveness. Naturalism gave the audience a great foundation for who Miles is.”

And the 13-year-old’s bedroom became a more immediate reflection of his identity. It’s fitting, in fact, that the movie opens with Morales in his bedroom, where we glimpse his love of drawing and music. “He collects vinyl and plays with turntables, which is an influence from his uncle Aaron [Mahershala Ali],” said Thompson. “He has all of his favorite music posters on the wall and toys that he grew up with. He’s obsessed with anime and has giant manga robots.”

Then, when Morales gets thrust into the Spider-Verse, his uncertainty about ordinary life choices becomes overwhelming when suddenly having to deal with his superhuman powers. For Thompson, it was obvious that the color palette should reflect Spidey’s iconic red and blue, which he sprinkles at every opportunity. But what also stands out is a moment in which Morales becomes engulfed by purple, signifying his bond with Aaron/Prowler. 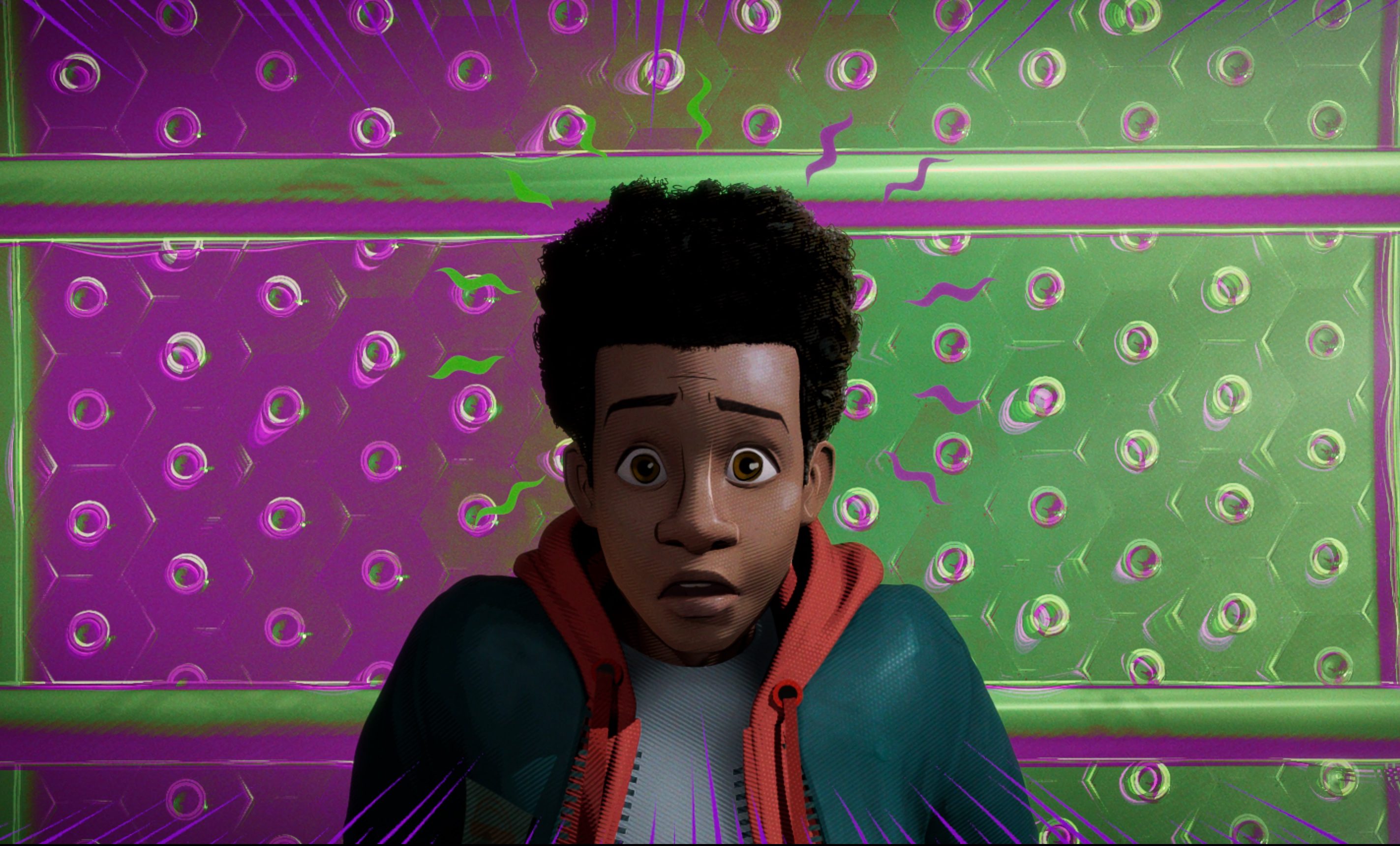 “And when Aaron dies, there’s red and blue light that’s flashing in the background,” Thompson said. “This is when the journey he’s on finally takes its toll and he has to decide who he’s really going to be. But I saved the red and black very specifically for Miles at the end of the movie, when he faces his darkest moment and rises up and truly becomes Spider-Man.”

Which leads to the psychedelic, Stargate-like vibe from “2001” at the end, when the Spideys band together to fight the baddies and deactivate the accelerator. “Conceptually, we talked about how the third act could be the deconstruction of a comic book down to its very essence,” Thompson said. 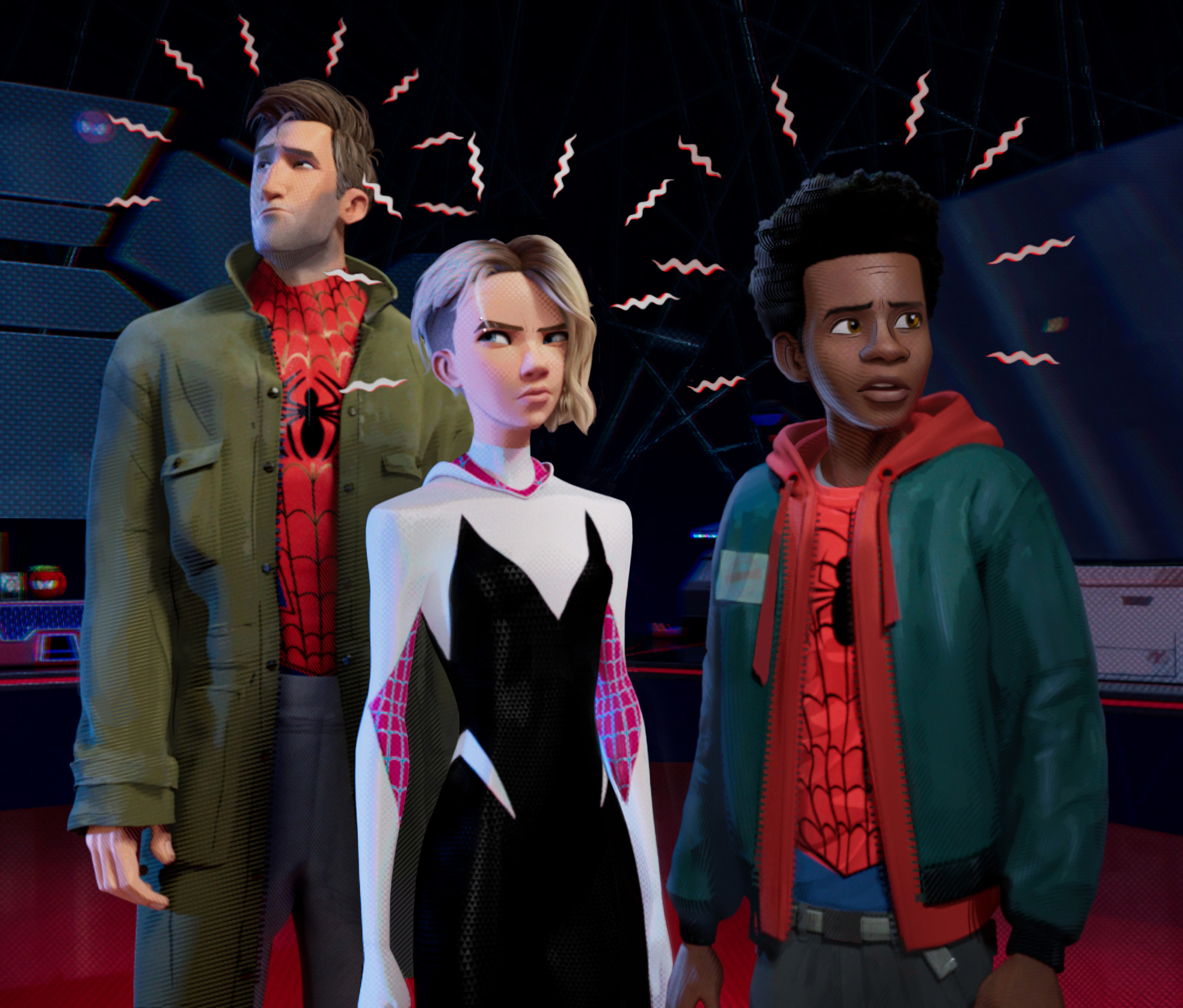 “So, as trippy as those scenes get, they’re just an extension of all the techniques we developed. But even then I had to be patient and not allow the color and techniques to overtake the story. We needed to still read the characters through the crazy action going on.

This Article is related to: Awards and tagged Best Animated Feature, Phil Lord and Chris Miller, production design, Spider-Man: Into the Spider-Verse