Like everything else in Phil Lord and Chris Miller’s “Spider-Man: Into the Spider-Verse,” the decision to change Doc Ock to Olivia Octavius turned the animated adventure upside down. Co-director Bob Persichetti proposed the gender-switched role as a subversive twist; when the production cast Kathryn Hahn (“Hotel Transylvania 3: Summer Vacation”) as her voice, Sony Animation finally believed that she would make a formidable villain.

“The freedom we had with an alt universe was an opportunity to lean into something very interesting with a female,” Persichetti said. “Early on, we had aspirations to get Kathryn Hahn to be a really smart, idiosyncratic, quirky but dangerous villain. And we fell in love with her voice and the way she played her, and then we just had to build a visualization of the two sides of her. And that was where the real fun took place.”

For writer and co-director Rodney Rothman, Olivia not only provided the key to cracking open the multiverse, but she also overshadowed the main villain, hot-headed Kingpin (Liev Schreiber).

“The original Ock was a guy, but an unusual take as a riff on The Dude from ‘The Big Lebowski,” said Rothman. “He worked at Caltech and was a hippie scientist, and [we looked at] the documentary ‘Particle Fever.’ That’s where we got the idea of using the Large Hadron Collider as the inspiration for our multiverse machine.

“But because we were being challenged by every aspect of the movie, Bob’s take on having a female Ock made sense to me as worth trying. She wants to discover and conquer the multiverse.”

The eureka moment came when production designer Justin Thompson introduced research about soft robotics (highly compliant materials similar to living organisms). “This idea about the tech made her so fresh and so different from what everybody had seen before with heavy, clanking, robotic tentacles,” said co-director Peter Ramsey. “It just humanized her even more, and that became the keystone to her whole visual look.” 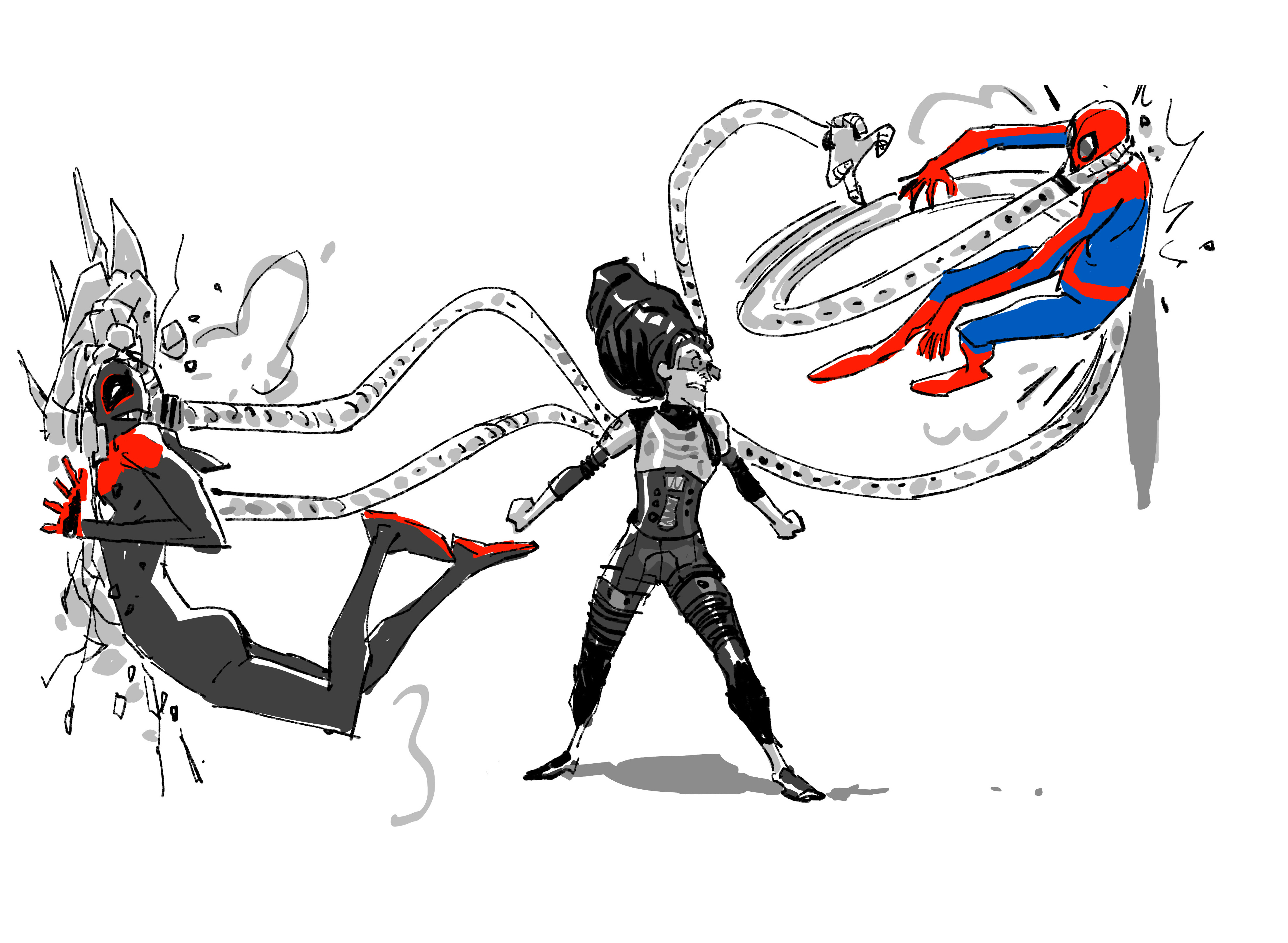 “We liked it because it was like building a practical effect in a computer,” said Persichetti. “If you were going to make arm tentacles in life, you might use soft robotics. It was like being realistic, even though you could do anything. Which Kathryn enjoyed. It captured some fundamental tension in the movie between things made by hand and things made by computer.”

Technically, Olivia was hard to animate. Ideally, the soft robotics would be done as a simulation. Sony Pictures Imageworks didn’t have that; it was busy breaking new ground with the model. So they had to animate every tentacle tube from a separate rig, making them different colors just so they could tell them apart in every frame.

Facial performance was difficult as well. “A lot of the first passes were too broad and made her feel less real,” said Persichetti. “It was like Ursula [from ‘The Little Mermaid’] with big grins and sharp eyebrows. So they pulled back. When she meets Peter Parker [Jake Johnson] in her lab, she knows that her machine has worked in a way that’s greater than she anticipated. We had to put a cap on her excitement, but when she’s fighting, that’s when the cap came off and she became an enjoyable villain.”

But whether she’s putting a choke hold on Spider-Man or Tombstone (Marvin Jones III) by inflating or deflating her tentacles, or leading an ensemble attack, Olivia’s always the center of attention. The ultimate challenge was choreographing the overcrowded fight in Aunt May’s (Lily Tomlin) cramped living room.

Read More:Spider-Man: Into the Spider-Verse’: Breaking the Rules of Animation

“There are tentacles in every shot in that sequence,” said Rothman. “We could’ve avoided it, but we didn’t. They’re the weird, unifying element of every shot in that crazy fight. Wherever you are, there’s a tentacle. And they’d each have their own story to tell, if you could follow them.”

This Article is related to: Awards and tagged Best Animated Feature, Oscars, Spider-Man: Into the Spider-Verse