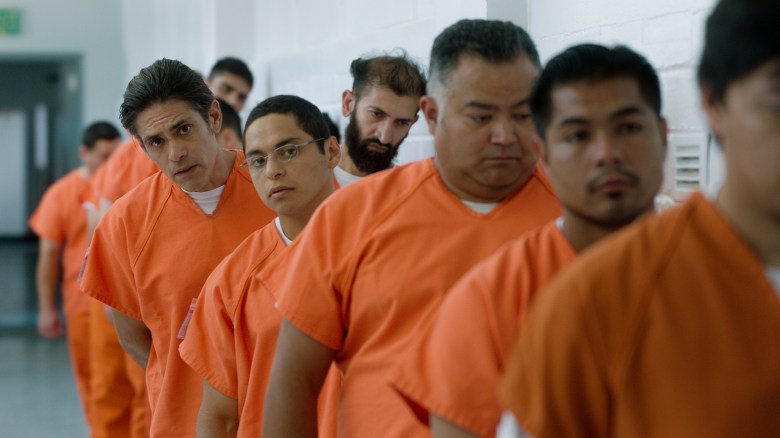 Undocumented immigrants are detained by the U.S. Immigration and Customs Enforcement on a regular basis, and their experiences could provide the foundation of a potent documentary, or a riveting social thriller. “The Infiltrators” endeavors to be both: Husband-and-wife co-directors Alex Rivera (“Sleep Dealer”) and Cristina Ibarra (“Las Marthas”) oscillates from real-life accounts of Dreamer activists going undercover in detention facilities to help reunite immigrants with their families, and fictional reenactments of the drama that unfolded inside.

The experimental approach takes some time to settle in and doesn’t always click, but at its best, “The Infiltrators” manages to personalize the undocumented struggle by transforming it into an unlikely blend of activism and suspense that makes a compelling case for the abolishment of ICE.

The two-pronged approach reflects its creators’ many modes: Rivera’s 2008 “Sleep Dealer” was a sci-fi allegory for contemporary immigration concerns, while Ibarra directed several documentaries on the same subject. For “The Infiltrators,” they capture the efforts of the National Immigrant Youth Alliance, a group of young Dreamers whose efforts to infiltrate Florida’s Broward Detention Center unfold through remarkable clandestine tactics. Led by Iranian refugee Mohammad Abdollahi, the group tracks innumerable requests from relatives to locate detainees on the inside and develop strategies for getting them out.

The movie follows a single case from several years ago, when Abdollahi enlisted fellow activist Marco Saavedra to turn himself in at Broward and help the group locate Claudio Rojas, an undocumented man detained outside his home after living in the United States for decades.

As Abdollahi recounts the process of presenting himself to ICE officials and being processed at the facility, “The Infiltrators” abandons the traditional documentary format. Captions introduce us to the actors playing key roles in the story ahead: “Maynor Alvarado as Marco,” “Manuel Uriza as Claudio,” and so on. At first, the approach is disorienting and stymies both modes of the story, as the filmmakers veer from the shaky-cam documentary footage of Abdollahi’s running strategy from his headquarters to the scripted sequences from the facility. But it’s nevertheless fascinating to watch the detailed nature of this scheme as the modes come together.

When Saavedra turns himself in, his initial conversation with a detention officer shifts between spoken dialogue and covertly recorded audio; once he’s detained and calls Abdollahi from the inside, we see Uriza acting in a set based on Broward and the real-life Abdollahi talking to him in real life. The result bolsters the genuine stakes of the fictionalized scenes while enhancing the urgency of their documentary counterparts.

The filmmakers gain confidence in the approach as the saga grows more complex, as Dreamer activist Viridiana Martinez (seen both as herself and played by actress Chelsea Rendon) infiltrates the women’s quarters of the center, while officials begin to grow suspicious. Meanwhile, activists survey Broward’s inner workings, explaining the complex system of deportation and the process through which inmates develop an internal communication network. There’s even an element of comedy  when Saavedra and Martinz portray clueless foreigners as they dupe agents at the entrance to Broward.

With time, the filmmakers deliver a fascinating contrast to national headlines surrounding attempts to abolish ICE. Rather than blending protest footage with somber tales of families split apart, “The Infiltrators” explains the precise function of ICE, and the sort of dangerous commitment required to do something about its destructive effects. There are no expert lawyers on hand to explain the legal threats at hand; instead, the filmmakers trust their young subjects — through action and testimony — to put the threat of ICE in the context of the people in its crosshairs. “We have to be the stereotypes we rebelled against,” Abdollahi explains to his team.

While “The Infiltrators” is exceedingly smart, it’s not exactly subtle. The security agents at Broward come across as thin, one-note villains, and the lack of depth to their intentions relegates “The Infiltrators” to a kind of inspirational agitprop. Nevertheless, the movie builds to a thrilling climax as the plan to release inmates from the facility gains momentum, and it creates the rousing impression that this troubling aspect of American security doesn’t have to remain static. However, the drama barely acknowledges that the events in question take place several years in the past — notably, before the election of Donald Trump and the acceleration of immigration fears on a national level. That doesn’t make the events of “The Infiltrators” any less compelling, but it positions the story as the first installment in a troubling franchise that’s only just getting started.

“The Infiltrators” premiered in the NEXT section at the 2019 Sundance Film Festival. It is currently seeking distribution.

This Article is related to: Film and tagged Alex Rivera, Reviews, Sundance, The Infiltrators