Berlin: Zoe Kazan and Andrea Riseborough are wonderful in an otherwise stilted and inconsistent story about the value of niceness in New York City. 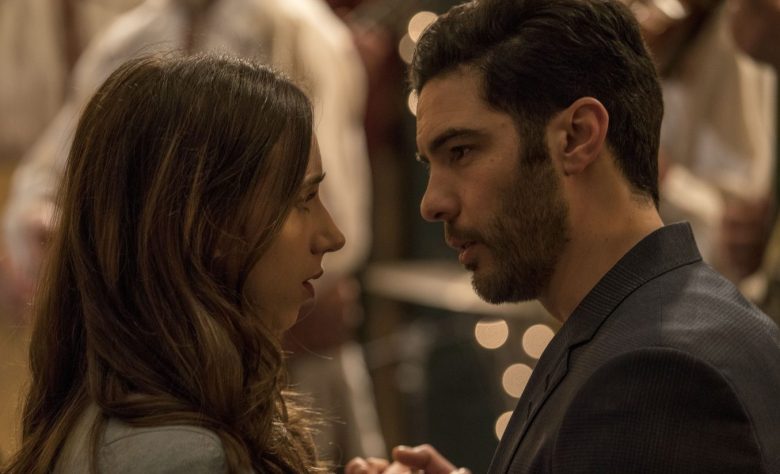 “The Kindness of Strangers”

New York can be an unforgiving city, even in the best of circumstances. Unfortunately for the awkward patchwork of characters who populate Lone Scherfig’s listless new melodrama, “The Kindness of Strangers” does not take place in the best of circumstances. Everyone in the film is lost and lonely in one way or another; everyone is either helpless or guilty; everyone is either about to hit bottom, or beginning to claw their way out of a hole that’s too deep to escape without some assistance. The young mother whose story provides the spine of this underdeveloped mosaic, is somehow all of those things at once.

Played by a tender and compellingly frayed Zoe Kazan, Clara opens the story in the pre-dawn hours by stealing her two young sons (Jack Fulton and Finlay Wojtak-Hissong) away from their Buffalo home, and from the abusive cop husband (Esben Smed as the demonic Richard) who’s recently turned his rage towards his kids. Paranoid that Richard might be able to track them down, Clara drives towards Manhattan without a credit card or a cell phone or anything else that might be useful for someone who’s trying to start a new life. Of course, it’s not as if Richard allowed Clara to develop much of an old life. There’s a reason why she doesn’t have any friends or family to turn to in her time of need — a reason why the only person she knows in all of New York is her layabout father-in-law, and he’s not going to be much help.

Clara is soon forced to sleep in her car and steal her food, the latter habit leading to the strangest development of a movie that often feels like it’s entirely comprised by inexplicable choices and chance encounters: Using whatever currency her whiteness provides, Clara nips a tray of hors d’oeuvres from a high-end cocktail party. As a result, her youngest son develops a taste for caviar, which inspires her to pinch their next meal from an opulent Russian joint she finds near Wall Street. Decorated like the Hermitage and defined by the cock-eyed humor of a Kaurismäki film, the Winter Palace isn’t just a restaurant, it’s also a respite from the indifference of the outside world. The owner (Bill Nighy) is a sweet man who’s quick to trust the fate of his business to anyone who comes in off the street, and his most recent hire — a handsome, newly released ex-con named Marc (Tahar Rahim) — seems eager to reflect his boss’ good intentions. Together, they make the joint feel like a warm hug in a cold city, and a hub of kindness in a movie where everyone could use some.

And yet, the script (the first Scherfig has written solo) is entirely disinterested in the Winter Palace as a place, or in any of the various institutions that prop up a scattered plot that gets lost whenever it starts to wander between its locations. While the stilted opening act is mostly carried along by the velocity of Kazan’s desperate sense of parental duty (it’s wrenching to watch her balance her own needs with those of her children, and to wrestle with the ways in which they don’t quite overlap), it’s also sustained by the expectation that all of the characters in Scherfig’s messy ensemble are being pulled towards the enchanted restaurant where they’ll be able to redeem each other.

And maybe they are, but the film never finds its center of gravity, or sees how the Winter Palace might help galvanize this story into more than the sum of its misshapen parts. While the movie works to depict how kindness breeds kindness, even in the cruelest of environments, it spends much of the time watching its motley collection of lost souls chase their own tails.

Perhaps that’s because Scherfig is stepping outside of her comfort zone, and struggling to reconcile the stately European romanticism of her previous work (e.g. “An Education,” “Their Finest”) with the hardscrabble vibe of a mercenary American milieu. Shooting with a handheld camera that harkens back to her Dogme 95, Scherfig often seems uncomfortable with her own dour locations and depressing story beats; not every New York movie needs to be shaped by the violent edges of a Safdie brothers’ film, but “The Kindness of Strangers” can’t square the direness of its characters with the underlying humanism that draws them together. Scherfig’s solution is a fable-esque logic that makes everything feel somewhat false.

Case in point: Safdie favorite Caleb Landry Jones is (kind of) cast against type as Jeff, a twitchy magical idiot type who gets fired from two different jobs because he’s “bad at just about everything.” It’s hard to tell if he’s supposed to be intellectually handicapped in some way, just as it’s hard to tell if Scherfig is playing his hopelessness for laughs; sandwiched between difficult sketches of Clara’s encroaching homelessness, we see Jeff lose an apartment because he drops his phone in the toaster, and lose a temp gig because he mistakes a fluffy dog named Beyoncé for a bed sheet and buries it under a massive pile of cloth. Arriving at a soup kitchen in need of a meal, Jeff stands on the wrong side of the counter, and gets handed an apron instead.

But Scherfig is also determined to not let things get too detached from reality, and so she occasionally shortchanges the film in other areas. Kazan and Rahim are both immensely charismatic actors, but “The Kindness of Strangers” cuts off their most romantic scenes, as though stifling their chemistry might help restore the movie’s balance between misery and magic. In a narrative that hinges on acts of pure generosity, it’s also strange that Marc wants something in return for the charity he shows to Clara and her kids. It’s not quid pro quo creepiness, but his motivations are too cloudy for a movie that overcomplicates its most basic emotions.

Even the most capable characters are vaguely unreal. That includes Alice — a heaven-sent ER nurse played by the shapeshifting Andrea Riseborough, predictably brilliant and elusive in a role that a lesser actress might have smothered with moral virtue — who’s so pure of heart that she uses her free time to run a meeting group for people in need of forgiveness (the role of guilt is over pronounced and under-explained). While “The Kindness of Strangers” is Clara’s story, it’s Alice whose generosity holds it together, and Alice who’s self-interest threatens to pull it apart. Even the helpers need a hand of their own.

“I’m nobody’s numero uno,” Alice laments, but she never abandons her angelic nature, and her persistent goodness pulls everyone to one side or the other; it would be awful enough that Clara’s husband is an abusive cop, but Scherfig feels compelled to turn him into a psychopathic killer, and the whole movie tips over into the absurd. There’s a palpable urgency to the film’s kindness, and a real despair to the film’s inability to make us believe in it.

“The Kindness of Strangers” premiered at the 2019 Berlin International Film Festival. It is currently seeking U.S. distribution.

This Article is related to: Film and tagged Berlinale, Reviews, The Kindness of Strangers