Now available on Amazon Prime Video, "This Giant Beast That is the Global Economy" uses a comedic spin to help illustrate financial ideas. 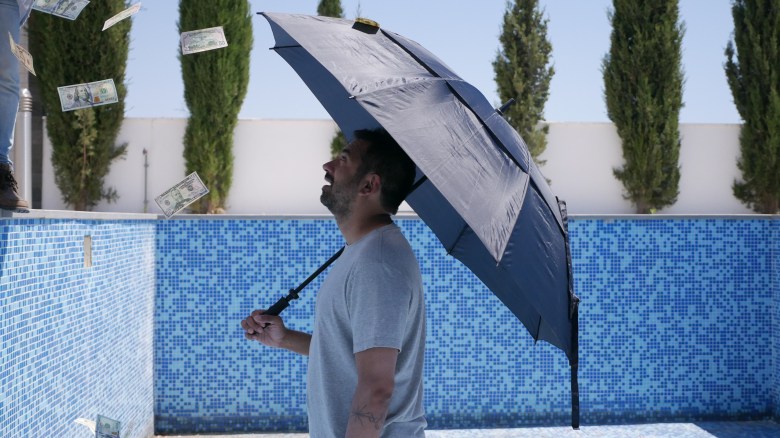 “Kal Penn” is the host of “This Giant Beast That Is the Global Economy,” a new series from Amazon Prime Video.  Those quotes around his name might be a little bit confusing, but they come from the fact that this comedic docuseries adventure through some of the more complex corners of the international financial world has a character as a guide, even though it may look an awful lot like comedic actor and former Obama White House staffer Kal Penn.

“I’m hosting it, but it’s not me. It’s like that version of Kal Penn the ‘This Giant Beast’ character is,” Penn told IndieWire. Produced by Adam McKay, the series carries the same vignette-laden style found in projects like “The Big Short.” Many of Penn’s comedy compatriots pop up on screen to explain economic concepts like rent-seeking and money laundering. Knowing that people might come in with preconceptions about what an economic explainer show might be like, Penn said there were plenty of discussions about how much information to assume any given audience member might have.

“I read the paper every day but that doesn’t mean that I necessarily have a deep understanding of what this stuff is, but at the same time it doesn’t mean that I need one of my sophomoric 69 jokes to have it explained to me,” Penn said. “On the flip side, if you’re going to do a show like this, you kind of want to have fun with it and make it accessible to folks who maybe, are not reading the paper everyday and getting there news in that way. You just want to offer a little bit of a human-interest peek into what that world might be like.”

Tackling such a broad concept like “the global economy” meant that the team behind the show could be versatile in the main thrusts of each episode. Some focus in on a brewing topic like global dependence on rubber, while others take a more philosophical view and ask questions like, “Are Rich People Dicks or Do Dicks Get Rich?” By his own categorization, Penn said that the show’s aim was not to crack some brand new solution to the world’s financial issues. (That can be hard to do when an entire industry can surges and burst under the weight of its own bubble, as happened with cryptocurrency, in the time between when production began on the show and when the first season was released.) Instead, he saw their goal as helping audiences gain a broader perspective on some challenging concepts. 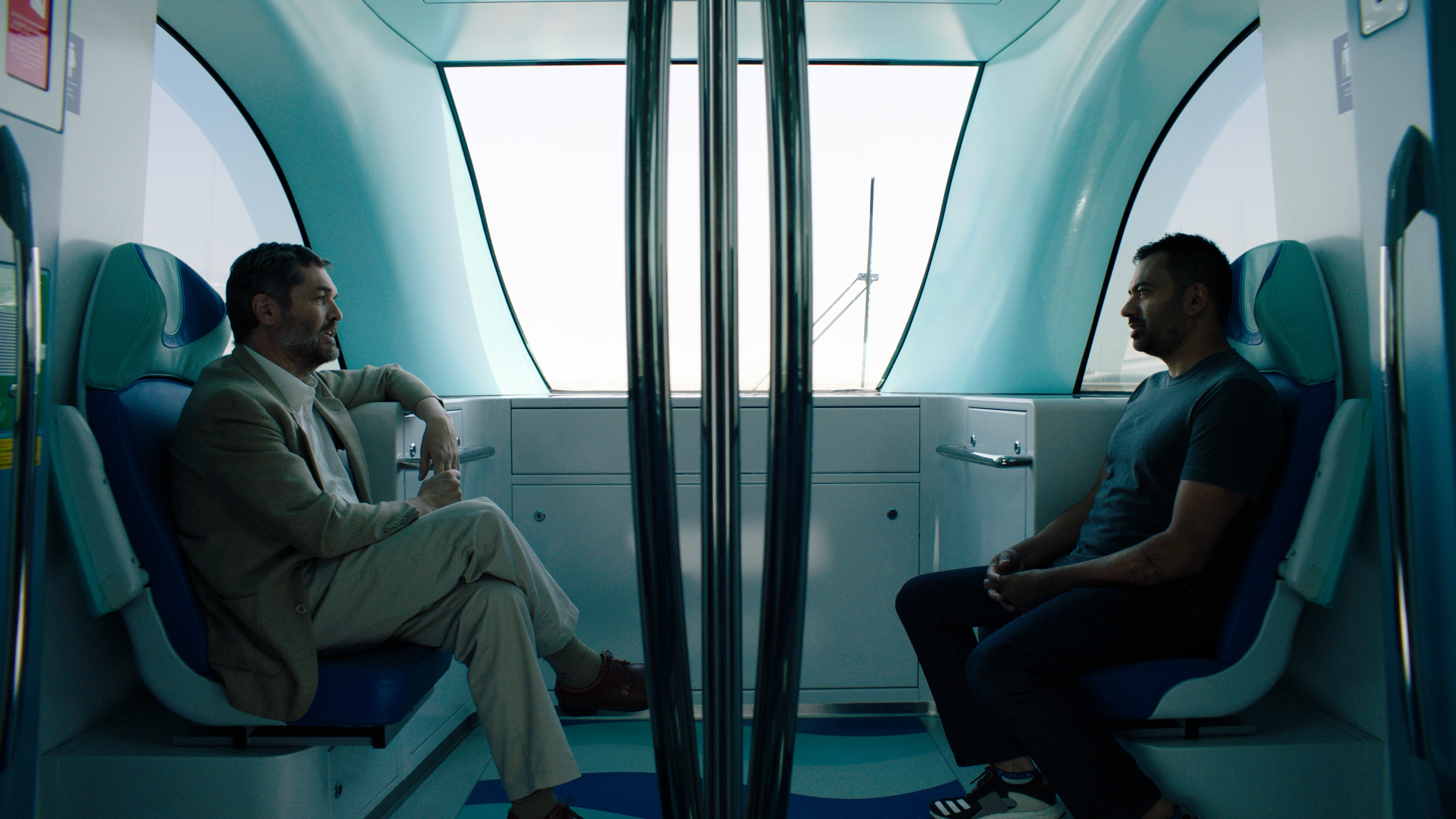 “We’re not journalists. This is a docuseries, but it’s not a documentary. We didn’t like go out for a year and see what we could find. Things are mapped out beforehand and you do research on who you’re interviewing and you kind of have a general sense of where the story might go, but you’re always prepared for things that you didn’t know were going to happen,” Penn said.

Some of those unexpected outcomes came from the fact that the series didn’t solely talk to industry leaders or academic theorists. There’s a balance in “This Giant Beast…” between those making wide-reaching financial decisions — with benevolent or malicious intent — and the ones further removed from those decisions who may most feel their actual consequences.

“The one thing we were all mindful of is that a lot of shows or articles that touch on this stuff end up somehow taking the position of, ‘Well, even though this person only gets paid $5 a day, it’s better than if they had no job, right?’ Like, we did not want to do that. That’s poverty porn and there are a number of issues wrong with that,” Penn said. “We also didn’t want to just dumb it down to a point where you were saying ‘OK, you can just pick these two choices and that’s it.’ It’s not an A or B world.”

Given his government bona fides, previously serving as Associate Director in the White House Office of Public Engagement, there were some things that “Penn” said as host of the show that did give him pause. But understanding the way that some similar shows are received led the “This Giant Beast…” team to realize that presenting these ideas as objectively as possible was going to lead to the most successful product.

“I think there’s a narration line that said something like, ‘For all of their dickish behavior, this type of terrible behavior is also beneficial to the rest of us.’ I thought, ‘I don’t want to say that. That’s not me.’ I definitely don’t believe that. I don’t believe that that’s true in a million years. But that’s the difference between me and the character of ‘Kal Penn,’ who needs to be opinionated, but not quite so decisive because we’re not trying to spoonfeed anything to the audience. We certainly don’t want to be like one of these, ‘There’s yet another Hollywood show, trying to tell you how to believe.'” 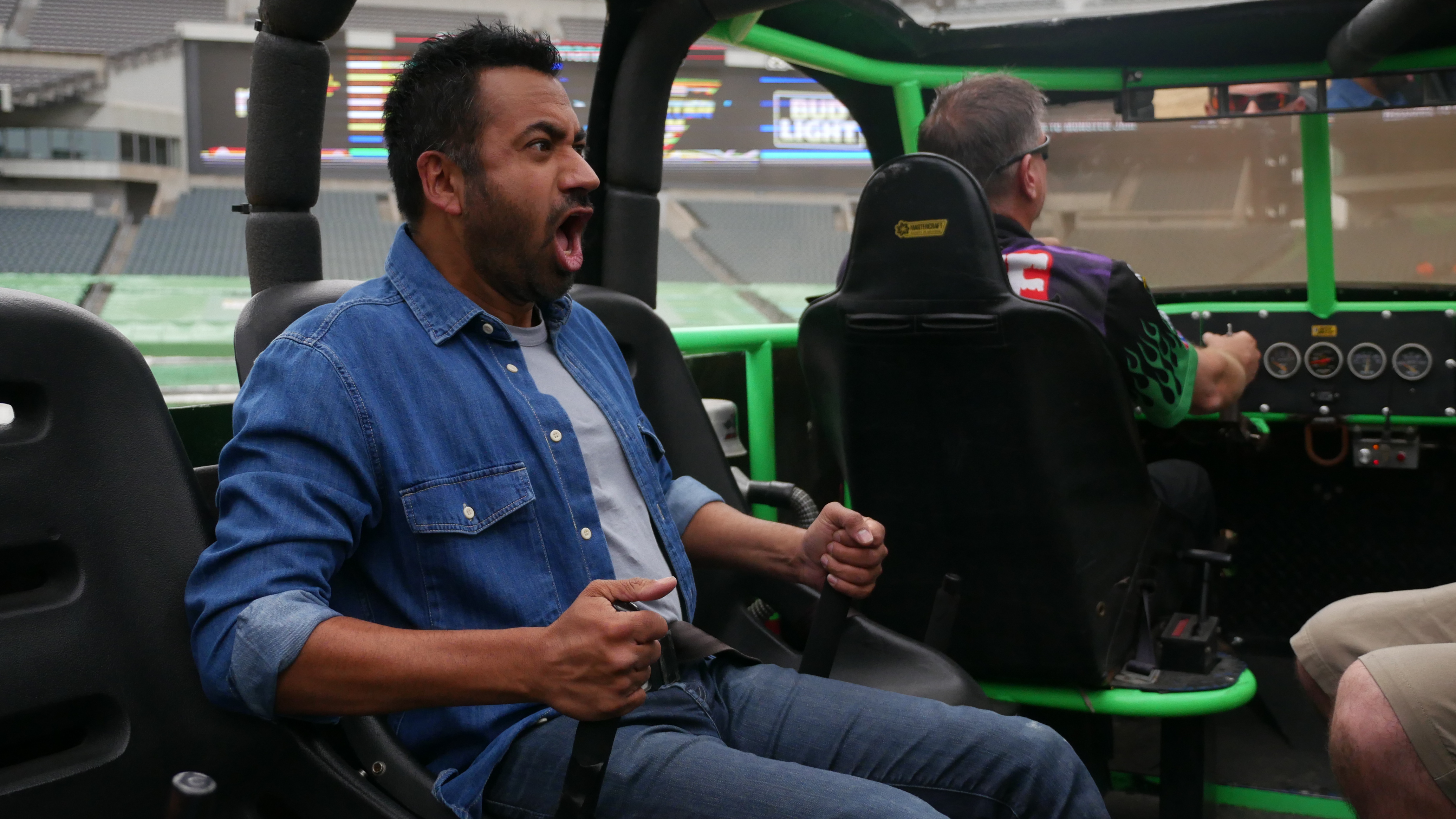 Part of avoiding charges of spoonfeeding audiences helped the show differentiate itself on a structural level. Sure, having cutaways to folks like Sasheer Zamata, Thomas Middleditch, Meghan Trainor, and Bobby Moynihan — offering metaphor-heavy explanations of modern global concepts — doesn’t feel too far off from some of the show’s weekly comic-hosted counterparts. But even if there might be a whiff of “Daily Show” DNA in the show’s approach, there’s a patience in the way that some of the show’s interviews unfold that make them feel wholly unique. When “Penn” talks with a lawyer in Cyprus or a former whistleblower in a St. Pancras transit terminal, these subjects feel less like jokey props or unwitting dupes.

“I think we had the luxury of time. I think if this were on a network where you’ve got segments and you need ad space to come in, if you put this on, it would probably seem like it dragged a little bit. But the flip side is, you can spend a little more time with people,” Penn said. “There’s some downtime, some silence, there are some tangents. This is not the same as reading a New York Times article. This is a little bit weirder and a little bit more in depth in a way that may seemingly not have to do with the subject material as a whole. But then you realize what you’re going for is like the quirkiness of who these people are, which is to me just sort of interesting to watch.”

Penn said that the show wasn’t trying to shy away from the fact that the show exists on a platform intrinsically tied to one of the biggest companies on the planet. It led them to sprinkle in some self-referential jokes throughout the series. (One running joke is that “Penn” travels in a private plane, which looks like a plane-shaped portion of a kids’ playplace setup.)

If anything, having the freedom to dip into certain subject matter has him already looking forward to potential subjects for a “This Giant Beast…” Season 2.

“I hope if we do future seasons that we could look at things like digitization and distribution platforms. There’s that, there’s the privatization of water, a whole bunch of stuff that I think is relevant to a lot of the things that we do,” Penn said.

“This Giant Beast That is the Global Economy” is now available to stream on Amazon Prime Video.

This Article is related to: Television and tagged Amazon Prime Video, Kal Penn