Creator Gerard Way acknowledges that there's a chance he might one day have something in common with George R.R. Martin.

Ellen Page and a CGI monkey in “The Umbrella Academy”

The ending of “The Umbrella Academy” Season 1 is such a cliffhanger that all it’s missing is a person literally hanging off a cliff. Its dramatic conclusion involves the end of the world, though the show’s core ensemble — a group of struggling young people with superpowers — may have managed to escape the cataclysm through time travel.

What happens next to all of these characters is unclear, at least to those who haven’t read the comic book series created by Gerard Way and Gabriel Bà, upon which the show is based. This meant that when it came to constructing the end of the season, showrunner Steve Blackman knew there was a chance that those final moments could be the last of the show. However, he told IndieWire, “I hope we get a second and third and fourth season, but I knew that having a great ending is important for Netflix as a streamer. You really want people to say, ‘I’ve got to come back and watch what happens.’ That was ultimate in my mind.”

If Netflix does choose to greenlight a second season, there’s plenty of narrative to work with, thanks to Way. While only two volumes have been published to date, he and artist collaborator Bà have plans for a total of eight graphic novels; the third volume, “Hotel Oblivion,” will be published in total in August 2019.

“The goal for us is to stay ahead of the show,” Way said, “and since we’re on Series 3 [of the comics], we are now ahead of the show. So that’s a good thing. The idea with the comic is to go right from Series 3, take a three-to-four-month break, then go right into Series 4. That is kind of our schedule to keep us on track. So there is story there and it’s all planned out.”

There is a chance that the TV show, should it get more seasons, could catch up with the comic books. “It takes us 18 months to do a season,” Blackman told Way. “I’m sure you’ll be on Volume 5 or 6 by the time we get to the next one.”

Way disagreed, saying that “No, we’ll be halfway through 4.” 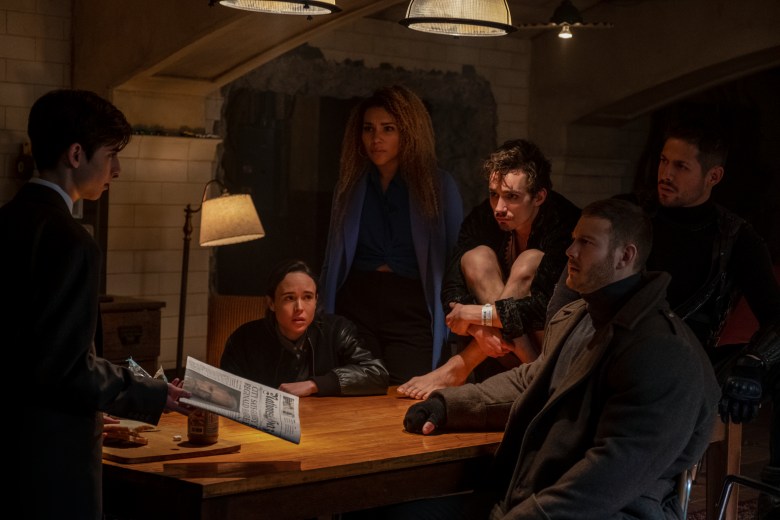 In addition, Way said, there is an 18-page document that spells out the entire narrative of the comic book, which Blackman and his writers have. According to Blackman, “he’s given me a really good idea to springboard to say where things are going and how they’ll be.”

It’s a situation similar to another writer whose ongoing fiction series was adapted for television, even though he hadn’t finished writing it yet, and Way said that yes, he’s “prepared for the potential reality” that he and “Game of Thrones” author George R.R. Martin might soon have something in common.

That said, Way said that he had a great relationship with Blackman. “It’s cool because Steve is super respectful of the source material and asks me questions and sometimes, he’ll ask me to help solve problems. Then, at the same time, he’s going, and because there’s a mutual respect, he’s going and making changes and I’m supporting those changes,” Way said. “I want him to feel free to tell the story he wants.”

Meanwhile, the ensemble cast, including Ellen Page, Robert Sheehan, Tom Hopper, Emmy Raver-Lampman, Aiden Gallagher, David Casteñeda, Cameron Britton, and Mary J. Blige, remains relatively in the dark — and was in a similar place during production, to the point where, when they were filming the finale, Gallagher said, “Steve pulled a George Lucas and wouldn’t give us the last two pages until, maybe, a few days before.”

Sheehan agreed. “Before we shot, yeah. He didn’t want it circulating around.”

Even though the cast has read the graphic novels, Page’s response to whether they know what’s coming in Season 2 was “Yeah, maybe.” Much has been discussed in vague terms, but only speculation was really possible — like Hopper knowing that his already massive character gets obese in the second graphic novel, which would require even more padding.

That said, they weren’t short on ideas. Castañeda, for example, said that “I’d just throw something out there — Steve, maybe some more disco, you know what I mean? A Saturday night disco kind of thing.”

Mary J. Blige and Cameron Britton in “The Umbrella Academy”

“They might have Dave and Diego have like a ‘Saturday Night Fever’ style disco dance-off,” Hopper added.

Raver-Lampman thought it was likely: “Yeah, they love it when we dance, so — just like a whole story line about you becoming an underground dancer…”

Meanwhile, both Britton and Blige wonder about whether their characters make it out, in different ways. Given the cataclysmic events of the finale, Blige said that she was sad if her character didn’t survive. Things are more complicated when it comes to Britton’s character, since at the end of the season, Hazel was trying to escape his old life for a new and happy one with innocent donut shop waitress Agnes.

“What I hope for Hazel is that he is never bothered again and he gets to live a simple happy happily ever after life with Agnes?” he said. “I doubt that if Hazel returns for Season 2, that would be the case. Some sort of conflict or tragedy would have to happen. In a way, I don’t look forward to it, it could be great or bad, but I’m just really happy for Hazel to get out.”

For an actor, knowing that the show they’re in could continue for years to come can be daunting. As Raver-Lampman said, “I can’t wrap my brain around it.”

Hopper agreed, noting that “At this point, we just finished Season 1. And we’ve only just sort of figured out what this show is, really, because we are just watching it ourselves. You can get a grasp of what it’s going to be when you shoot it, but you never know until you actually see it in the final product.”

That said, Hopper added, “to be honest, if we were on a show like this for five, six, seven years, for me, I’d say that’s a gift, because so few shows are this unique, and you don’t know what’s going to happen that season, or that episode. You don’t know what you’re going to be doing, but you know your skills are tested constantly.”

“Shooting the first season — they made us as comfortable as possible. They trusted us and our choices,” Raver-Lampman said. “They asked our opinions, we were very much involved. If we felt like a scene didn’t make sense, we always were allowed to talk it through. And we were always valued as actors and valued for the decisions that we were making on behalf of these characters. So being a part of, for lack of a better word, family, like that, and to potentially go for six, seven, however many years, hopefully. That would be amazing.”

The emotional connection the cast feels for the show might be best summed up by Page, who has has a fair amount of experience with superhero narratives. But she got excited for “Umbrella Academy” because seeing genre storytelling mixed with something that has emotional depth for its characters “just makes me so much more excited. Because I want to go be thrilled and see fucking wacky shit, and like, some of the amazing visual sequences in this show, and also be like really moved emotionally, which I am in this show.”

As she continued, “for me, all the big, fantastic, beautiful sequences end up meaning so much more when there’s so much feeling behind it.”

“The Umbrella Academy” Season 1 is streaming now on Netflix.

This Article is related to: Television and tagged Ellen Page, Gerard Way, The Umbrella Academy