Glenn Close had been heavily favored to win, which Colman graciously acknowledged backstage. 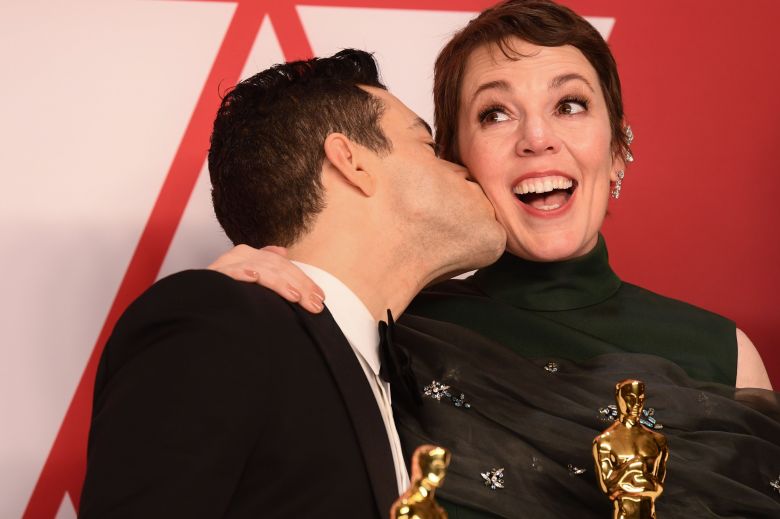 Rami Malek and Olivia Colman in the press room at the 91st Academy Awards.

It had to be the biggest upset of the night: Olivia Colman winning Best Actress for her role as Queen Anne in “The Favourite.” Admittedly, if anyone was going to beat heavily presumed frontrunner Glenn Close, Colman was the most likely candidate — but it was still seen as an extremely unlikely event going into the Academy Awards Sunday night. Close, who’s 71 and has now been nominated seven times for an Oscar without ever winning the statuette, was gracious as ever. But Colman, both in her acceptance speech and backstage seemed as shocked as anyone.

Speaking in the press room, Colman seemed genuinely flummoxed: “I have no idea, I could not tell you what I’m feeling,” she said. “Next year I’ll be able to put it into words, but I have no idea what to do with myself at the moment.” One response she had at the ready, however, was when one reporter asked her what Queen Anne would say to her now: “Have some cake.”

But if the 45-year-old actress seemed shocked when she delivered her acceptance speech onstage, it hardly mattered as Colman’s was one of the most delightful spiels of the whole evening. “Any little girl who’s practicing your speech in front of the the telly… you never know!” she said. And she gave heartfelt thanks to Close: “Glenn Close, you’ve been my idol for so long, and this is not how I wanted it to be, and I think you’re amazing.”

The best moment of all may have been when she blew raspberries after noting she’d just been flashed the “wrap up” sign by a stagehand.

Though “The Favourite” tied with “Roma” for the most nominations, 10 in total, Colman’s victory was the only one the Yorgos Lanthimos film won on the night. Part of the reason she was not expected was due to her relatively low profile in the U.S. — she had previously had memorable supporting roles in “The Lobster,” also directed by Lanthimos, and “Hot Fuzz” — but was far from a household name. Then again, her profile was probably about the same as Mark Rylance’s when he defeated Sylvester Stallone (“Creed”) to win Best Supporting Actor for “Bridge of Spies” in 2016.

Moreover, there was some vocal criticism that Colman’s performance was not really a lead role, that she was a supporting performance — or if Colman was a lead performance, then co-stars Rachel Weisz and Emma Stone, both nominated for Supporting Actress but with similar screentime, were lead performances as well.

Then, there was the fact that Colman hasn’t been very visible on the Oscars campaign circuit as she’s been busy filming two seasons of Netflix’s “The Crown” back to back. She’s stepping in to play Queen Elizabeth II, following Claire Foy’s acclaimed performance in the first two seasons.

By any measure, Glenn Close had history — as well as most of the previous awards that usually indicate an Oscar victory — on her side. She even won Best Actress at the Film Independent Spirit Awards Saturday night, an honor given by a presumably less-friendly voting body than the Academy’s, who usually care more about rectifying oversights of the past.

All of this means that Colman’s victory is one of the more surprising upsets in recent Academy Awards memory, though the award is certainly deserved. Colman’s performance as Queen Anne is arguably the turn that ties the entire film together and gives “The Favourite” a degree of pathos where it’s otherwise a biting satire. She said in her speech, addressing her kids, who she hoped were watching her victory, that “This is not going to happen again.” She’s too humble — who now would count her out?

The 2019 Academy Awards returned to their usual home at the Dolby Theatre in the Hollywood and Highland Center on Hollywood Blvd., on Sunday, February 24.

This Article is related to: Awards and tagged Olivia Colman, Oscars