The feminist pornographer's primer on ecosexuality, a term she coined with partner Beth Stephens, becomes a stirring call to climate action. 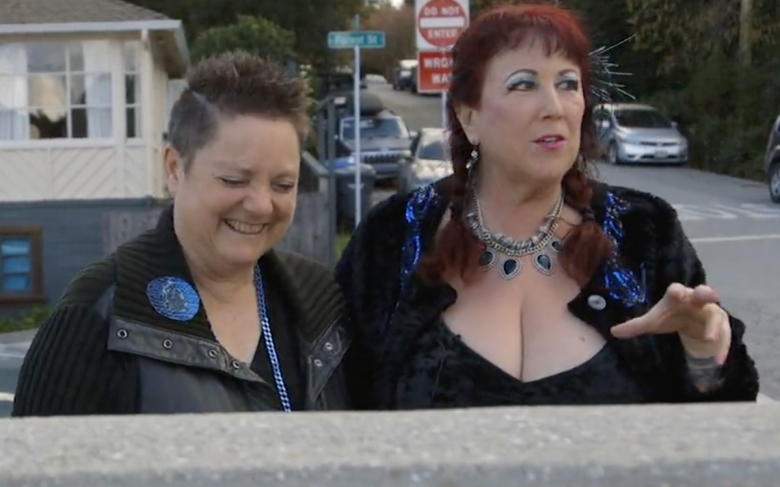 As her longtime life partner and co-director Beth Stephens puts it in the second documentary they’ve made together, “There’s a reason her name is Annie Sprinkle.” This loving duo leads their audience through a sensual requiem for mother earth in “Water Makes Us Wet—An Ecosexual Adventure,” which recently premiered at Doc Fortnight, the Museum of Modern Art’s annual documentary festival. For the uninitiated, the film serves as an introduction to Sprinkle and Stephens’ sexecology movement, also known as ecosexuality, which Wikipedia describes as “a radical form of environmental activism based around nature fetishism.” In the film’s definition, an ecosexual is “a person who imagines the earth as their lover, and finds nature (human and non-human) sensual and erotic.”

The documentary is narrated by the earth herself, as voiced by artist and transgender pioneer Sandy Stone. Stone’s gentle exposition guides the proceedings with a soft rumble, enlivening the many images of Sprinkle’s ample bosom doused in water with all the wonder of a bedtime parable or fairytale. And an effective parable, it is: What begins as a primer on ecosexuality gives way to a radical model for loving the earth so fiercely that one feels the ravages of climate change as deeply as if she were a fellow human being. While the sexual part of ecosexual may feel alien to most mainstream viewers, Sprinkle and Stephens have much to teach in their deep empathy and mourning for the earth. 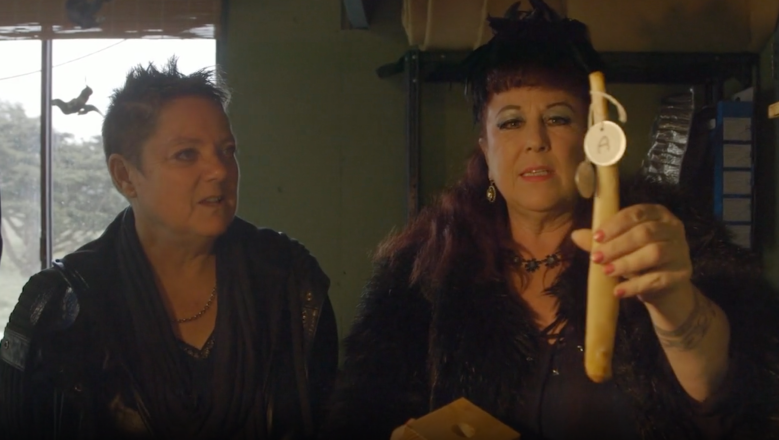 Sprinkle co-directs and co-hosts the film with Stephens, an art professor at UC Santa Cruz and an avid hydrophile. The bulk of the film follows the lumbering pair who, along with their black lab Butch, embark on a water-themed road trip in their vintage RV, leading them to California’s biggest reservoirs, lettuce farms, and waste-water treatment plants. Inspired by one San Francisco drain enthusiast, the film ends with the couple and their friends adopting a sewage drain; cleaning it up, naming it, and anointing it with a white bow.

The movie shows its micro-budget in some conspicuous reaction shots, which show Sprinkle and Stephens nodding their heads out of sync with lectures by nature conservationists and sewage experts. (Starring in your own documentary has its challenges, but their perspective is all over the movie; we didn’t need those cutaways to remind us.) The movie’s abstract softcore sex scenes and impressionistic water collages feel much more authentic — playing like nods to experimental lesbian filmmakers such as Barbara Hammer and Su Friedrich.

As the title alludes, an infectious sense of play and humor permeate “Water Makes Us Wet.” Sometimes intentionally, such as the inspired editing involved in a conversation between Sprinkle, Stephens, and a particularly vocal group of elephant seals. Or when Sprinkle, eating a greasy fast-food burger, admits: “This is more embarrassing than making porn.” At other times, their earnestness is just too endearing not to laugh, like when Stephens — her arm draped around an irrigation pipe as if it were an old friend — holds her ear up to the rushing flow and shouts: “I hope one day all these pipes burst, and you get to flow the way you want to flow!”

As a film, “Water Makes Us Wet” won’t go down in the annals of the current wave of popular, groundbreaking documentaries. It is more effective, and more moving, as an impassioned call to climate action than as a tool for sex education. Like the connection between Sprinkle and Stephens, the movie’s two main themes form a truly inspired partnership; that of an environmentalist heart with an ancient, primal passion. In making “Water Makes Us Wet,” the filmmakers have embarked upon the noble pursuit of moving people to care about climate change as if their lives — and their sex lives — depended on it.