29-year-old filmmaker Hu Bo killed himself after finishing his debut, but the four-hour masterpiece he left behind will resonate for ages. 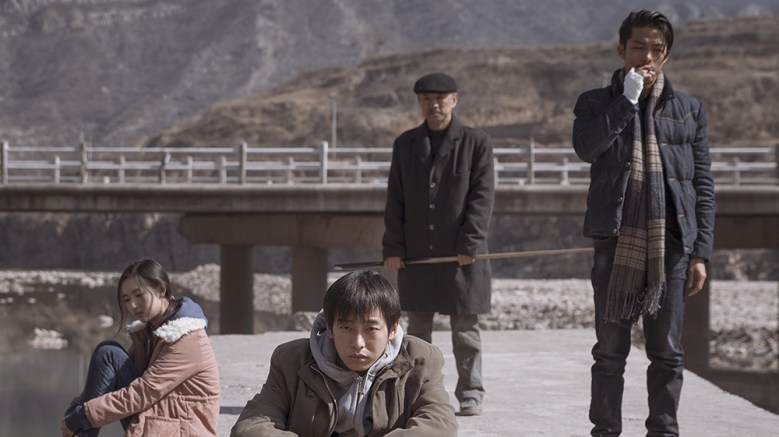 It’s tempting to think of “An Elephant Sitting Still” as a suicide note written with blood in a dirty patch of hard snow. Hard to sit through and impossible to forget, this torpid four-hour anti-drama is suffused with the sort of hopelessness that cinema only sees every once in a long while (Werner Herzog’s “Stroszek” and Béla Tarr’s “The Turin Horse” come to mind), and the man who made it — a former student of Tarr’s — killed himself before the world premiere of his monolithic first (and last) feature. His name was Hu Bo, and he was 29 years old.

Hu had reportedly been feuding with his financiers, who wanted to cut the running time in half. But to presume the role that may have played in his death would be as problematic as assimilating Hu’s suicide — which inevitably casts a long shadow over the film — into the fabric of the film itself. His memory will always be inextricable from his movie (and vice-versa), but it would be painfully reductive to conclude that one of those things is able to explain the other. Even if Hu had every intention of writing his will on-screen, there was surely more to him than can be divined from his work. And even if “An Elephant Sitting Still” can be read as one man’s self-immolating act of surrender, to do so would be to ignore the film’s compellingly fraught relationship with the politics of survival in a no-hope nation.

Loosely adapted from one of the two controversial novels Hu wrote before his death, “An Elephant Sitting Still” unfolds like a frozen cross between Paul Thomas Anderson’s “Magnolia” and Jia Zhangke’s “A Touch of Sin” (complete with the light flourish of magical-realism that marriage would lead you to expect). The cold and colorless film takes place over the course of a single day in the industrial desolation of China’s Hebei province — just south of Beijing, though it looks just north of Hell — and collects four wayward souls into such a decrepit mosaic that they can’t even tell they’re part of the same story.

Wei Bu (Peng Yuchang) is the closest thing to a main character. Bullied at home almost as badly as he’s bullied at school, Wei Bu is a blank and glowering stand-in for an entire generation of teenagers who are being denied a future; in a movie that’s almost entirely composed of painful moments, there’s something extra brutal about the scene in which a spiteful administrator at Wei Bu’s second-rate high school tells him the whole place is being demolished: “You will go to the worst high school in the city. When you graduate, most of [your class] will become street vendors.” Wei Bu has no reason not to believe him; he knows that he was born into a dead-end. “I think it makes sense,” he calmly says to a friend, as though double-checking the answer to a math problem.

The girl he likes, Huang Ling (a flinty, no-nonsense Wang Yuwen), is having her own troubles at school. It’s hard to tell if her relationship with the school’s vice principal is sexual in nature, but it’s definitely inappropriate, and neither the kids who secretly recorded them together — nor Huang Ling’s alcoholic single mother — would bother to parse the difference if the video got out. Elsewhere, an aging pensioner named Wang Jin (Li Congxi) is coping with the news that his awful son is sending him off to the world’s most depressing retirement home, and a handsome gangster named Yu Cheng — who Zhang Yu plays with enough style and self-damning ennui that it feels like he got lost on his way to a Wong Kar-Wai movie — reckons with his own internal rot. Yu Cheng’s morning begins when he’s caught in bed with his best friend’s wife, a discovery that causes his pal to leap out the window and plummet to his death; this will not be the low-point of Yu Cheng’s day. 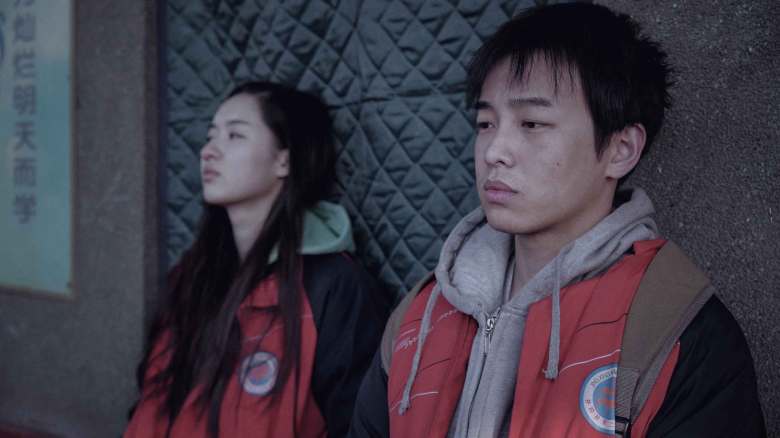 While these characters occasionally cross paths over the course of the film (their respective threads only knotting together in the final hour), Hu avoids the easy convenience of an “everything is connected” narrative; his movie has little interest in the conventional drama of cause and effect, and its fractured structure is used to emphasize the distance between these people rather than the ties that bind them together. For much of the movie, the lead characters are most urgently connected by a shared fascination with an elephant they’ve heard about in the inner Mongolian region of Manzhouli.

The story goes that the animal spends every day sitting in full public view, completely indifferent to everything that’s happening in the world around it. The metaphor — and, like the whale in Tarr’s “Werckmeister Harmonies,” it may be something more than that — is introduced in the opening seconds and left vague after that, but its memory lingers in the background of every scene, and grows stronger with each moment of cruelty, violence, and biblical callousness. How wonderful it must be to go unbothered by the narrowness of existence; how beautiful to live so blissfully ignorant of your own damnation.

As the remarkably eventful day wears on, paths begin to cross in banal ways. Wei Bu is involved in a clumsily staged manslaughter (one of a handful of moments in which Hu’s form is undone by its function), and the victim is Yu Cheng’s younger brother. When Wang Jin goes looking for his adorable missing dog (good luck with that), he winds up being accosted by another major character. These lives fold into each other like trash bags in an overflowing bin, a metaphor so palpable that Yu Cheng puts it into words: “My life is like a dumpster,” he says while staring into the middle distance. “Garbage keeps piling up. They come one after another — you can never clean it up.” Another film might give audiences a moment to feel bad for the guy; “An Elephant Sitting Still” chides you for being so callow. What good would your sympathy do for these people?

As the film wears on — less and less seeming to happen once the pieces are put in motion — that rhetorical question begins to assume a strange insistence. The more these people bump into each other, the more opaque the smog of isolation around them becomes. People seldom look at each other as they talk, and Hu’s unbroken handheld style (relayed by Fan Chao’s casually dazzling steadicam cinematography) calls extra attention to what’s omitted from each frame, as long-take conversation scenes often box out the secondary characters; Huang Ling’s special friend is a disembodied male voice for several hours before he slips into the background of a shallow-focused shot during a moment of panic. 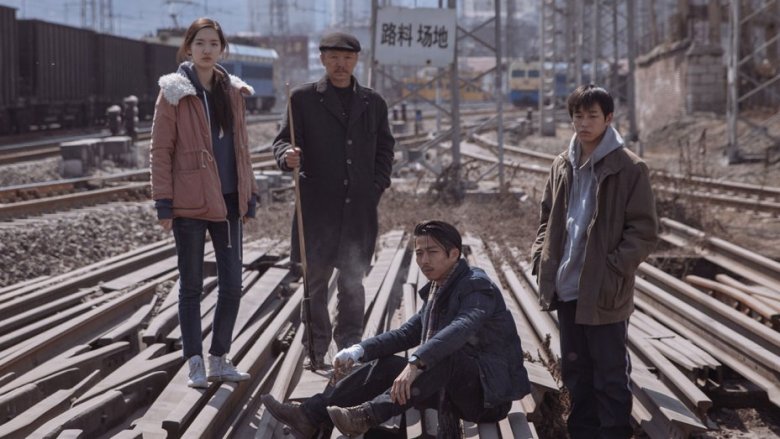 The camera so consistently emphasizes the space between bodies that it becomes hard to imagine how any two of them could ever touch (in a film with little love and almost zero levity, even incidental contact assumes major importance). How could the shared dream that’s drawing them closer be even remotely as strong as the individual despair that’s keeping them apart? Yu Cheng disavows any guilt over his friend’s suicide, arguing that being cuckolded was just the last straw for someone who was already succumbing to their own economic nihilism, and that might be more accurate than his lover would care to admit.

Hebei is shown to be a hushed purgatory — an anti-Pleasantville — from which there is no escape; Wei Bu yells a loud and protracted “fuckkk youuuuu!” at one of the many trains that rumbles through the gray wasteland without stopping. That characters are often seen walking somewhere only underscores the fact that they have nowhere to go (another touch that Hu may have borrowed from Tarr), and the sheer length of this increasingly spartan narrative allows the inertia of their lives to become palpable for those of us watching them; every day feels like this.

Maybe a baby step from a high window is the only way out. Death is definitely closer than Manzhouli, though Wang Jin has some choice words for anyone who finds hope through fixating on a better place: “Life won’t get better. It’s all about agony, and that agony has begun since before you were now. You think a new place will fix that? It’s all bullshit. New place, new sufferings.” Again, this is not the feel-good film of the year.

And yet, the story builds towards a climactic trip to see the mythical elephant in Manzhouli, and old Wang Jin is eager to go along for the ride. What happens would be wrong to reveal and impossible to predict, but — in its own desultory way — it seems to complicate the immaculate misery that motivated their journey. Hope may only get them so far, but perhaps life still has something to show them on the way. Whatever that might be, it’s a great tragedy that Hu never found it for himself. All the same, and without contriving an empty solution for the demoralized billions its director left behind, it’s a minor miracle that “An Elephant Sitting Still” finds the curiosity to keep searching.

“An Elephant Sitting Still” is now playing in theaters via KimStim.

This Article is related to: Film and tagged An Elephant Sitting Still, Hu Bo, Reviews