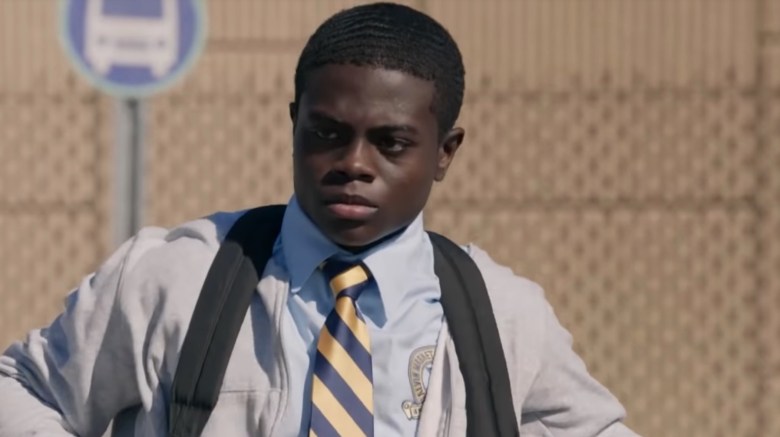 It’s hard to gauge a new show after a single episode, but when the pilot is as captivating as that of “David Makes Man,” then there’s at least good reason to get excited. Tarell Alvin McCraney, an award-winning playwright turned award-winning screenwriter (“Moonlight”), has chosen a deeply personal story for his first TV project, and it’s brought to vivid life by a strong cast and director Michael Francis Williams’ enthralling visual design. Grand, intimate, and pressing, there’s a lot to admire, which greatly improves the odds OWN’s drama could really be something.

David (Akili McDowell) is a smart kid. Living in southern Miami, David walks his younger brother to school every morning, and then sprints to the other side of the fence dividing his home in the projects from the more affluent neighborhood across the way. Despite the hustle, he usually misses his school bus and ends up taking public transportation to get to his magnet school on the other side of town. David earned his shot at a school for gifted children, but the two personas he adopts are wearing on him. How long can he keep up his smiling and innocent demeanor for school, without slipping into his rough and tumble attitude built up for the projects?

One friend encourages David to pick one and be done with it. Sky (Isaiah Johnson) lives in the projects, too, dealing dope along with a small crew of young men. The tall, poetry-loving, sunglasses-at-night man is a friend and, at times, even a mentor to the teenager, but David repeatedly says they’re not supposed to see each other. David is trying to avoid getting sucked into gang life, while protecting his brother, but the leader’s sweet recruitment tactics are turning meaner.

With David’s mother Gloria (Alana Arenas) often at work (and struggling with drug addiction), the weight of adult responsibility is thrust on the kid’s shoulders without much support. Sometimes, it will crack his carefully choreographed demeanor, while other times it will send him into an ocean-filled dreamworld. “David Makes Man” is the kind of show that puts its main protagonist in a field of wheat, the wind pushing the blades of grass between his fingers, in order to signify growth (among other mature themes) — and yet, it rarely feels pretentious. Given how much information is divulged in the first hour, the series could skew too far into metaphor, but for now it elicits an apt, imposing dilemma.

It helps that McDowell is stellar. Still as can be and precisely expressive, the actor never performs out of his age; he can pivot from joyfully playing with water balloons to silently weeping in the rain. That is to say, he’s always a believable 14-year-old, which is a credit to McDowell and McCraney. Phylicia Rashad, as usual, makes her mark quickly — if you’re going to watch only one drama series where Rashad plays a school teacher, make it this one (and “This Is Us” has been pretty good this season). Johnson finds a similar stoic power, and both make it easy to imagine why their characters would be parent figures to David.

McCraney, who’s described the series as semi-autobiographical, tries to pack in one too many twists at the end, but he’s built up such an attachment to this young man’s story that one unnecessary exclamation point is forgivable. “David Makes Man” feels like a show that can grow into itself nicely, finding exactly what it wants to show the audience and what it knows it doesn’t need to as it goes along. But right from the start, there’s a distinct rhythm that’ll hook you; a tonal confidence that’s as rhapsodic as it can be calm. Trust between the storyteller and audience is built over a longer period of time in television, compared to McCraney’s past efforts. He’s well on his way to making yet another brilliant work.

“David Makes Man” premiered at the 2019 SXSW Film Festival. The hourlong drama will debut this summer on OWN.