The limited series based on Terry Pratchett and Neil Gaiman's classic premieres May 31 on Amazon Prime Video. 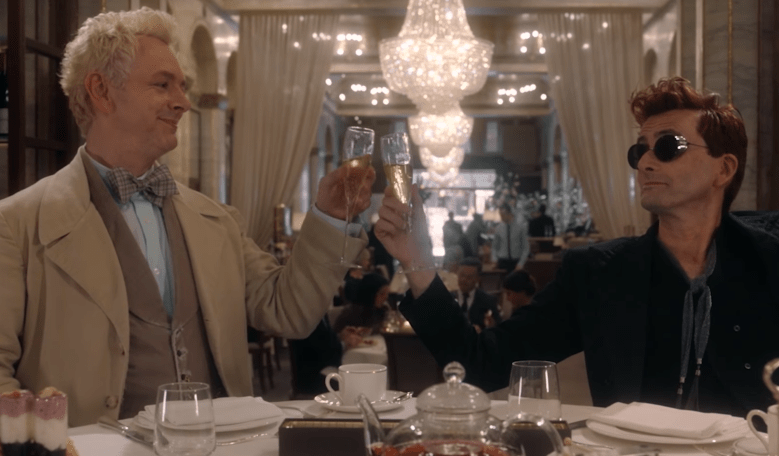 If the world was about to end, you’d do worse than to trust the fate of all living things to an angel and a demon who look like Michael Sheen and David Tennant.

Luckily, Aziraphale (Sheen) and Crowley (Tennant) will have some help in “Good Omens,” an upcoming six-part series based on Terry Pratchett and Neil Gaiman’s classic 1990 fantasy novel. Set in modern-day London (but stretching across multiple millennia at various points), the story follows this unlikely pair as they look to hold off the arrival of the Anti-christ and a climactic battle between Heaven and Hell.

Complicating these matters is a supporting cast of characters who could easily take up their own series. Jon Hamm co-stars as head Archangel Gabriel, while Frances McDormand and Benedict Cumberbatch provide the voices of God and Satan, respectively. The impressive ensemble also includes Nick Offerman, Michael McKean, Jack Whitehall, Mireille Enos, Miranda Richardson, and Derek Jacobi.

“Doctor Who,” “Sherlock,” and “Outlander” alum Douglas Mackinnon is the director on the series, with Gaiman serving as both writer and showrunner. It’s part of a busy few months for Gaiman, who’ll soon also see the premiere of Season 2 of “American Gods,” also based on one of his novels. Next up for “Good Omens” is a trip to SXSW, where the show will have an on-site installation and will screen clips from the series before a special panel with cast and crew.

And as far as that pesky awards chatter, this series is following the lead of fellow limited series, Netflix’s Central Park Five biopic “When They See Us,” and debuting right under the Emmys eligibility wire.

In the meantime, watch the full trailer for the series below: