The filmmaker also addresses the movie's subtle racial themes and how he survived a second round with Oscar season. 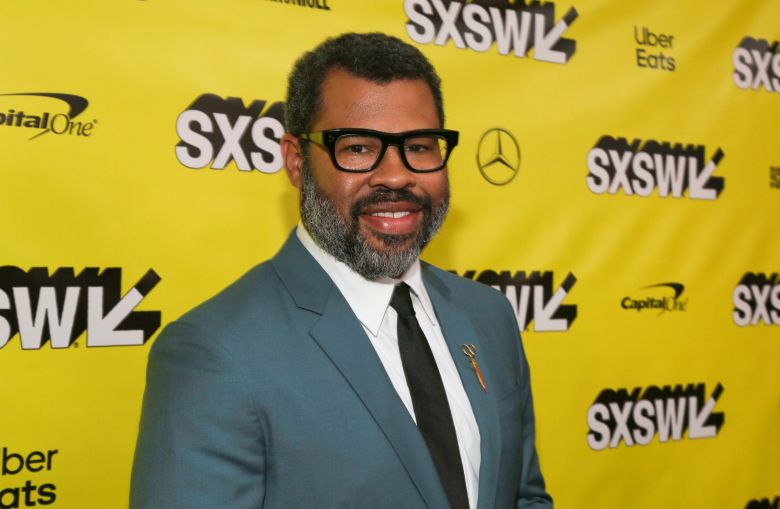 When “Get Out” became the surprise hit of 2017, writer-director Jordan Peele faced a whole new challenge in considering his next moves. Peele’s unnerving assault on America’s racial divide rebooted the former television humorist and turned him into an Oscar-winning writer-director in demand. When he sat down with Universal, the studio that distributed “Get Out,” to pitch his sophomore feature, “the cards were kind of in my hands,” Peele said. “It didn’t feel like an audition. It was me telling them, ‘This is what I want to do, this is where I want to do it, how’s that sound?’”

Sitting in a hotel room in Austin, Texas, the morning after his “Get Out” follow-up “Us” premiered to a rapturous audience reception on the opening night of the SXSW Film Festival, Peele recalled the way he conceived of the project in manageable terms.

Much of “Us” takes the form of a home-invasion thriller, as Adelaide (Lupita Nyong’o) defends her family from the arrival of red-clad psychopaths who look exactly like them and show up at their coastal California vacation home with murderous intent. However, the scope of the movie expands to a larger post-apocalyptic survival story as the relatives continue to search for a safe place. That meant Peele, who directed “Get Out” with the typical low-budget Blumhouse Productions model for around $5 million, needed more resources. “I was like, look, I want to be able to take my filmmaking up a notch, so I want to be able to make a bigger budget movie,” he said. “But I don’t want to make such a big budget movie that all of a sudden we’ve crossed this line where the risk means you’re going to be fucking with my story.”

Peele confirmed reports that “Us” was made for around $20 million. “I had about five times the budget on this one, which by movie standards is still not that expensive of a film,” he said. “That was the key for me. Otherwise, I may not have had my freedom. As a filmmaker, I also thrive with a certain restriction. I didn’t want to overreach with the budget and all of a sudden have a studio being responsible on me.” He laughed. “There’s never been a point where they’ve expressed anything but wanting to make this.” When Universal gave Peele the green light to make “Us,” it also signed a first-look deal with his Monkeypaw Productions. 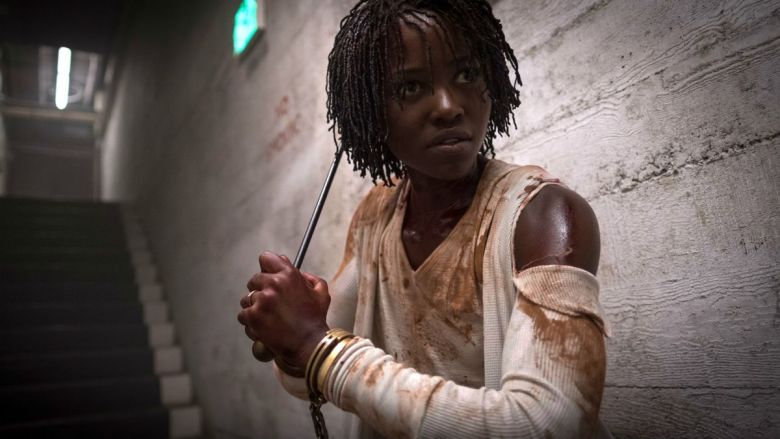 Lupita Nyong’o in “Us”

Peele also contended with lofty cultural expectations. “Get Out” galvanized black audiences around the world, became the first African American debut feature to gross over $100 million, and Peele was the first black Best Screenplay winner. The movie’s savvy look at covert racism in white liberal communities became a flash point for new debates about the country’s racial divide. With “Us,” however, Peele has taken to differentiating his focus with a recurring pitch. When he introduced the trailer for the movie at a press event in December, he told media in attendance that “while it was important for me to have a black family at the center of a horror film, it’s also important to note that this movie, unlike ‘Get Out,’ is not about race.” Instead, Peele has been arguing that the movie has broader aims. “When I decided to write this movie, I was stricken by the fact that we are in a time where we fear each other,” he said. “We’re pointing the finger, and I wanted to suggest that maybe the monster we really need to look at has our face. Maybe the evil is us.”

Of course, as Peele’s “Get Out” proved to a fault, America has a long way to go before it achieves racial equality. So isn’t everything about race? “Totally,” he said. “Just by virtue of having a black family in a horror movie like this, surrounded by a lot of white people, race enters people’s minds. That’s part of the trickery of race, the idea of race. On the one hand, most of us know deep in our hearts and scientifically that race is an invention of perception, an illusion. We’re all human. On the other hand, it’s an inescapable cultural reality.” He acknowledged that audiences can do the legwork whether or not he spells it out. “I wanted to make a movie about Americans, and the fact that they’re black is not the point,” he said. “But I can’t escape that there’s a loaded connection between America and blackness.” Still, he felt the need to manage expectations. “Because of ‘Get Out,’ my fear is that people will go in analyzing it from a racial perspective and that that will overshadow the more intended analysis,” he said. “I’m really going after all of us.”

Told he might get sick of repeating that succinct one-line breakdown, Peele shrugged. “I really mean it, though,” he said. “I didn’t declare what politics this family has for a reason. I didn’t have the equivalent of ‘I would’ve voted for Obama a third time’” — a now-iconic line from “Get Out” — “because I think that this film can be applied to many different factions. When you look at our ability to point the finger at the Other, whether in fear, whether in hatred, whether we’re right or not, that shouldn’t interfere with our ability to point the finger inward as well.”

While “Us” tackles a more abstract set of themes than “Get Out,” some of the new movie’s reference points have a personal resonance for Peele. A key plot point revolves around events taking place in 1986, including the controversial Hands Across America fundraiser for the homeless.

Peele turned seven that year. “I remember a feeling of duality during that time,” he said. “There was this ultra-positive sense of American hope and mission, and yet a real darkness on the other side of it.” He remembers the Challenger disaster taking place during that time as well. “That was a real trauma for my generation,” he said. “I think I was on this cusp of understanding and not understanding, getting shielded from that after getting worked up towards it. There are certain images at our starting point in the film that hold a similar duality for me, a sense of America as the vanguard of all that is good, cool, bright, and energetic, but also this weird darkness and politics that I couldn’t understand.”

Peele’s expanded ambition also gave him room to salute an array of movies that influenced him in his youth. “I’m pulling from a wider array of movies, because I knew I could sort of boil them down and create something weirder with all of them,” he said. “There’s a certain Hitchcock influence to this sort of Bay Area setting.” He cited both “The Birds” and “Vertigo” as impacting the movie’s visual style. “There’s a brightness, a commitment to color,” he said. He also turned to Michael Haneke’s seminal home invasion saga “Funny Games” as well as “Poltergeist,” due to “this idea of a family up against a crazy situation.”

With “Us” garnering rave reviews and anticipated to make over $40 million on its opening weekend, Peele’s reputation as a major filmmaking talent shows no sign of slowing down. But he continues to remain active as a prolific producer as well, with his “Twilight Zone” reboot around the corner, among other projects. Peele’s biggest contribution over the past year found him back in Oscar season conversation as one of several producers on Spike Lee’s “BlacKkKlansman” nominated for Best Picture.

While Lee eventually won Best Adapted Screenplay for the project, Peele remained less active on the awards circuit. “It was much easier for me, because I was finishing the film,” he said. “I had a great excuse to not have to campaign and get out there and do the circuit, as it were. That being said, it was a supremely emotional moment when Spike won, and I felt like I played a part in one of the masters getting what he deserved.” Peele was visibly emotional during Lee’s speech. “I was seeing him have the opportunity he should’ve done years ago,” he said. 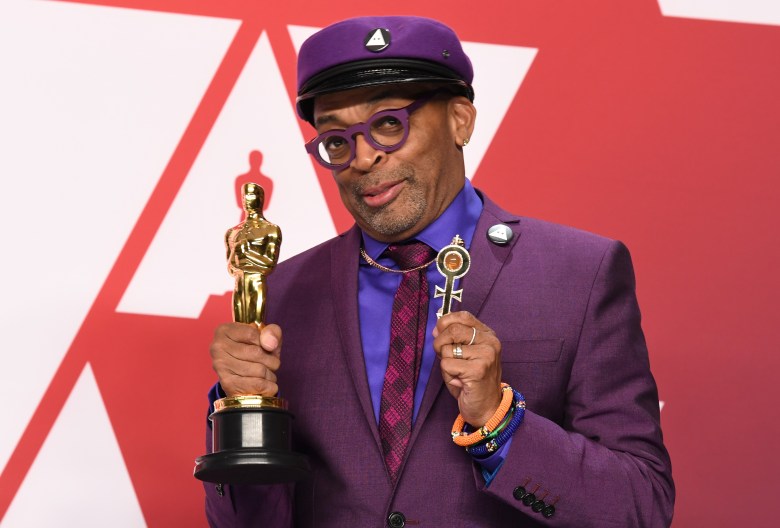 Much has been made about Lee’s response in the immediate aftermath of the Best Picture announcement, when “Green Book” took the top prize. Lee nearly walked out of the ceremony, but paused to talk to Peele while the winners were giving their speeches. “He said his ‘Driving Miss Daisy’ thing,” Peele said, referencing Lee’s oft-cited line that he repeated to press backstage (“Every time somebody is driving somebody, I lose”).

“I think ultimately he had a visceral reaction to the outcome,” Peele said. “Spike is a really amazing character. He can seem angry, but then that little smirk comes on his face and you know he’s kind of putting you on. He’s always honest and truthful, but he’s an entertainer and he’s fun.” Peele himself was unperturbed about losing the Best Picture race a year after winning his first Oscar. “At the end of the day, Spike had a great night,” Peele said. “In some way, his legacy was fulfilled.”

This Article is related to: Film and tagged Interviews, Jordan Peele, SXSW, Us