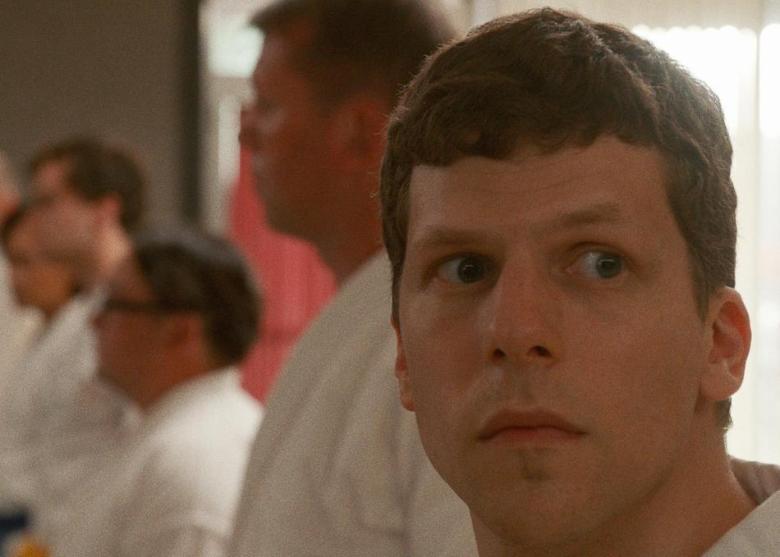 “The Art of Self-Defense”

Editor’s note: This review was originally published at the 2019 SXSW Film Festival. Bleecker Street releases the film on Friday, July 12.

Jesse Eisenberg’s ability to hover inside a bundle of nerves has been the driving force behind his brand since “The Squid and the Whale,” but with few exceptions, his movies usually operate at a lower register. The occasional examples include Richard Ayaode’s Kafkaesque “The Double” and the under-seen surrealist romp “The Living Wake,” both of which deploy Eisenberg’s inscrutable features as narrative device. Now comes “The Art of Self-Defense,” which unleashes the actor in a sinister dark comedy as a karate-obsessed loser on the brink of losing his mind, and it’s about time the actor gave his wildest performance ever.

The long-awaited second feature from Riley Stearns after his quirky 2014 cult thriller “Faults” finds the filmmaker reigning in his ironic style for a movie that works just right for his distinctive tone. Stearns first gained traction on the festival circuit for his idiosyncratic shorts, most notably 2013’s “Cub,” about a girl raised by wolves who kills her own parents. Despite its disturbing premise, “Cub” unfolds with an amusing matter-of-fact style that gets at the essence of Stearns’ directorial voice: a macabre variation on Wes Anderson, Stearns’ tone involves a tricky negotiation between the melancholy and the macabre. “The Art of Self-Defense” doesn’t always pull that balance off, but it has enough ambition and wacky payoff to make the zany gamble worthwhile.

A deadpan character study about coming out of one’s shell, the movie devolves into a subterranean nightmare over the course of very unpredictable set of events. As introverted accountant Casey, Eisenberg gulps and mutters his way through a sad routine. The burly men at the office water cooler have no interest in letting him into his circle, so he spends most of his time learning French and hanging around at home with his dachshund. Casey’s life isn’t great, but at least it’s dependable — until, one night while going on a shopping trip, a group of masked bikers beat him to a bloody pulp.

Traumatized and deflated, he retreats into his home for months, only contemplating his next moves with a visit to the gun shop. But that possibility gets sidelined when Casey comes across a local martial arts studio, lorded over by a virile instructor who only goes by the name Sensei (Alessandro Nivola, swinging for an absurdly understated caricature of his own). Before long, Casey’s immersed in this Westernized ecosystem of kicking and punching routines, as Sensei preys on Casey’s insecurities and turns the scared puppy into a cartoonish warrior.

Or so he thinks. Imagine Danny McBride’s breakout role in “Foot Fist Way” slamming into Jake Gyllenhaal’s “Nightcrawler” maniac and you might get the idea that Sterns is playing with here: a comic investigation into masculinity that doubles as a cautionary tale. “Casey. That’s a very feminine name,” Sensei tells Casey, while also taking issue with his choice of a canine companion and virtually every other aspect of the poor guy’s existence. With time, the advice starts to yield some outrageous results, and an investment in the movie’s offbeat tone pays off. Eisenberg throws himself into the character’s deranged nutty professor transformation. Before long, Casey’s combatting his more timid qualities by blasting heavy metal, learning German instead of French, and barking orders at everyone around him in ridiculous monotone. (At his local cafe, he tells the barista, “I’ve got a new usual. Coffee. Black. With nothing to eat.”)

Stearns develops Casey’s bizarre journey by gradual sketching out the ecosystem of the gym, from the crazy-eyed disciple (David Zellner) obsessed with landing Sensei’s approval to the instructor’s stern assistant teacher (an intriguing but underutilized Imogen Poots), whose feelings about being the only woman in this testosterone-fueled world remains a central mystery until the last act. When “The Art of Self-Defense” gets there, it yields a series of shocking confrontations that complete his transition into outright lunacy. Casey’s growing determination to make his way through a cruel world that exploits his weaknesses leads to such jarring circumstances that “The Art of Self-Defense” might register as a horror movie if Eisenberg weren’t such a terrific central punchline.

This sort of dark, jagged storytelling won’t settle with viewers who require every emotional beat to be telegraphed upfront, and regardless, the movie pushes the limits of its appeal over the course of 104 minutes. Stearns’ script has a tendency to linger on dry interactions that can turn clunky when they overstay their welcome. But “The Art of Self-Defense” manages to clarify the filmmaker’s intriguing vision by stuffing it into a remarkably unnerving character study that winds its way to one of the greatest punchlines in recent movie memory. “I didn’t play by the rules,” Casey says at one point, “but there never were any rules.” That seems to be Stearns’ mantra.

“The Art of Self-Defense” premiered at the 2019 SXSW Film Festival. Bleecker Street releases it later this year.

This Article is related to: Film and tagged Jesse Eisenberg, Reviews, SXSW, The Art of Self-Defense