Plus, more Paleyfest news about CBS All Access’ update of the classic sci-fi/horror series premiering April 1. 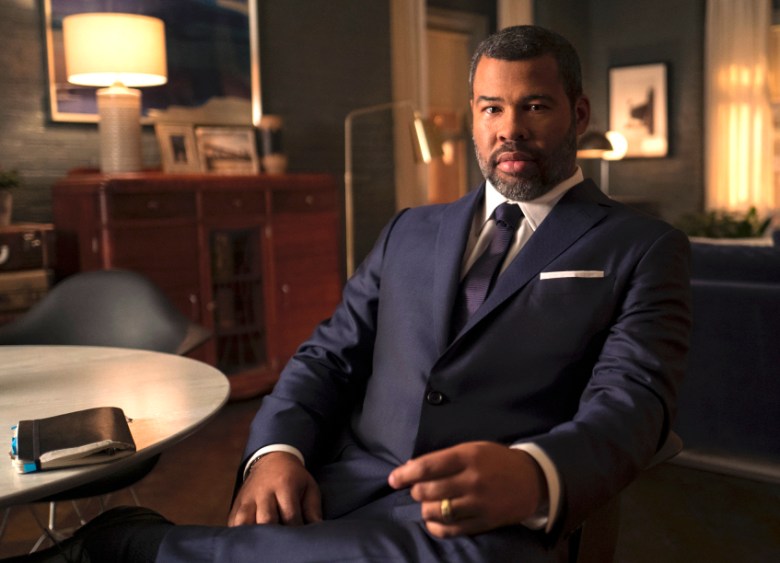 Jordan Peele in “The Twilight Zone”

Jordan Peele may have delivered another horror masterpiece with “Us” now in theaters, but he still had plenty of fears when it came to rebooting “The Twilight Zone.” At Sunday’s Paleyfest panel for “Twilight Zone,” the Oscar winner addressed why he was afraid to be the series’ host and narrator, roles that original series creator Rod Serling made famous.

“It’s one of these things where it’s terrifying to step into the shoes of such an iconic dude. I mean he’s such a master,” said Peele. “And I’m thinking as a fan watching the show and it’s like, ‘Is that, is that Key or Peele up there? I don’t know.’ It felt presumptuous.”

The more he thought of the impact of Serling’s onscreen presence though, the more Peele came around.

Read More:  ‘The Twilight Zone’ Trailer: Jordan Peele’s Reboot Will Get Under Your Skin

“Part of the DNA of the show was to have Rod, an important producer and such an important presence in the show representing it, and being the face [of it],” said Peele. “So in the end it felt right. It was one of those situations where how long can you bat away the opportunity of a lifetime? I did it, and it’s such an incredible honor and it feels like I’m living in an episode of ‘The Twilight Zone.’” 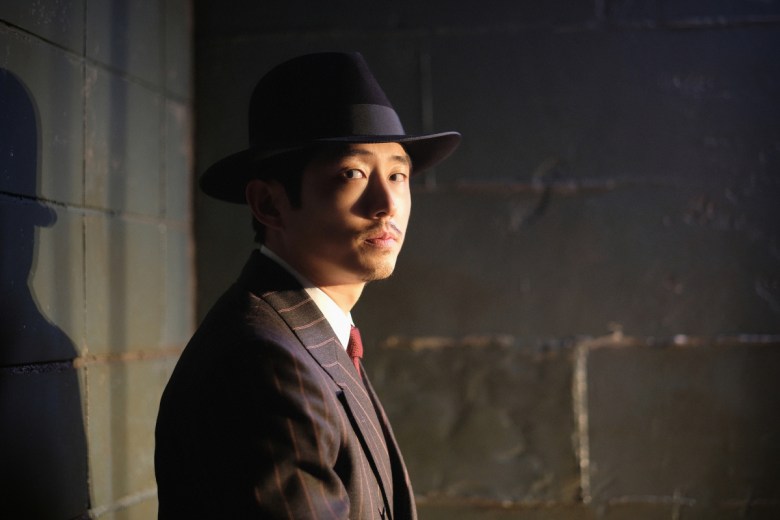 This reluctance mirrored how Peele initially felt about even tackling the return of “The Twilight Zone.” He and executive producer Simon Kinberg had agreed that it was too big of a show to reboot, but real-life events convinced them otherwise.

“One of the things that we kept coming back to was the timing felt right because it’s one of the sentences you hear often like once a week for the past couple years: “It feels like we’re living in the fucking ‘Twilight Zone.’ That was the signal.”

Kinberg cited the surreal nature of ”a reality star who had no political experience [becoming] the leader of the free world” as the ultimate example of a “Twilight Zone” plot. “Jordan’s interest in the show and the conversations we started to have changed the conversation with CBS about the show and just how far we can push with the show,” he said.

Peele acknowledged that the science fiction and horror trappings made for fun escapist fare, but didn’t downplay the impact of the show’s storytelling. As with most of his art, “Twilight Zone” could be used as a tool to reflect on and comment upon society’s ills.

“One thing that we definitely landed on was Serling’s show is important. He is a master of parable. He’s a master of allegory. And what he did was he spoke to society through stories,” said Peele. “This is one of the most powerful weapons that people have against violence and hatred and all the awful things that this world can bring and certainly all the awful things that we have now. There were some things that Serling was simply 50 years too early to talk about.” 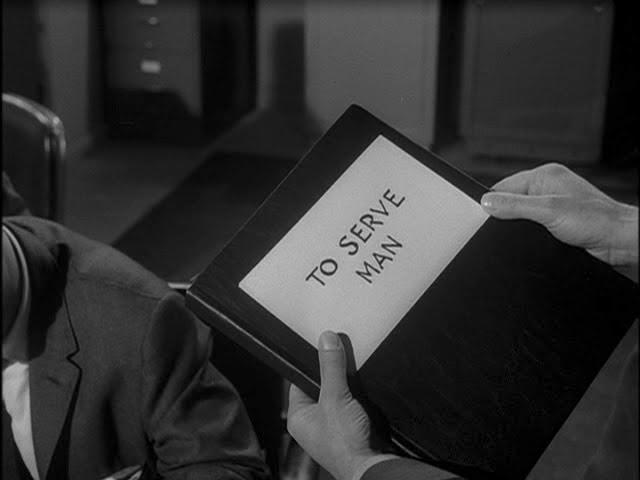 However, on the flip side of that serious purpose lies a certain slyness. “One of the things that really opened this up for me was to realize that [Serling] is a humorist. We think of him as a horror science fiction master but he has a perfect-pitch tone of comedy… that we were calling the Serling wink.”

Peele pointed to the classic episode “To Serve Man,” in which aliens land on Earth and insist they’re only there to help and serve mankind. But it’s revealed — too late — by then the end of the episode that the alien’s book is a cook book. They want to serve man… for dinner. Peele called it “basically a long-winded dad pun.”

“That was a big thing that kind of opened up the energy of the show. ‘The Twilight Zone’ is a place where anything can happen. The possibilities are as endless as your imagination can take them. Even when they’re at their most harrowing, they leave you feeling up; they give you a sense of fun, they give you something to talk about going into your week… That sort of subversive humor offers a relief from just the grind of reality, which is so often just depressing and struggling and, and crazy-making. He’s a comedy guy.”

The Cast Weighs In

Much like the original “Twilight Zone” series, the new one involves bizarre situations that often involve a major twist. In order to keep the anticipation high and not spoil the series, almost no details have been released on the episodes’ plots. The one exception is the episode starring Adam Scott, which is loosely inspired by the classic Richard Donner-directed episode “Nightmare at 20,000 Feet” starring William Shatner as a man who’s just recovered from a nervous breakdown who is the only person an a flight to see a gremlin out on the wing. Scott’s episode, “Nightmare at 30,000 Feet” was teased in the new series trailer, but it’s unclear what the twist will be. 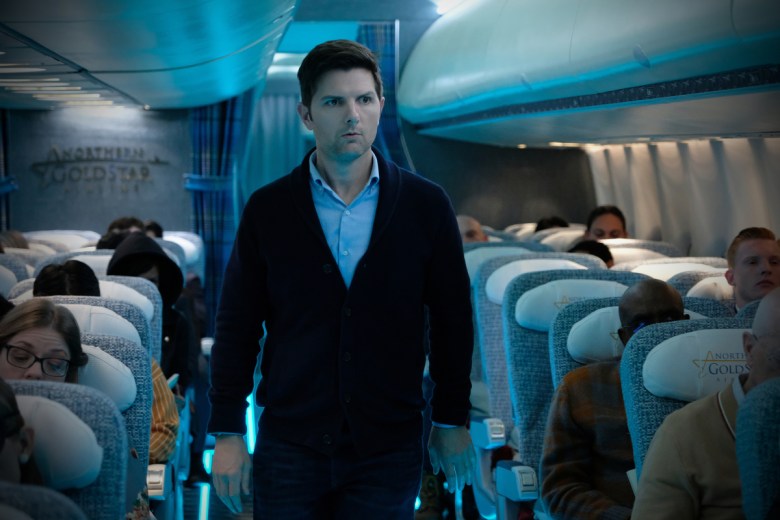 Scott said he discovered the original series when he was about 11 or 12. “Every night there was a different story, a half hour long that I could jump into. So it’s been one of my favorite shows forever and ‘Nightmare at 20,000 Feet’ the William Shatner one, but also the John Lithgow one from the movie I’ve seen so many dozens of times. I’m a huge fan and so excited to jump in in every way.”

The rest of the cast had to be cagier about their episodes. Ike Barinholtz had filmed an episode written by Heather Campbell, co-starring Rhea Seehorn and Taissa Farmiga.

“I got sent the script that was so well-written by the great Heather Campbell. It definitely dealt with the overall theme of toxic masculinity, I would say, which we are definitely being strangled by,” he said. “The feeling that I got by reading the script — and I don’t even think this was their intention — that if it had tones of one of my favorite episodes, which is, ‘The Monsters Are Due on Maple Street.’”

Sanaa Lathan praised the inclusivity in the cast and the rich characterizations in her script. “I was on the edge of my seat the whole read,” she said. “I’ve done sci-fi movies and, and one of the things about horror or sci-fi is they tend to kind of skew like cardboard characters, stereotypical. And one of the things that I love about Jordan’s work … is that these are fully developed characters with all of the arc that you can ever dream of. So for me that was, it was kind of a gift.” 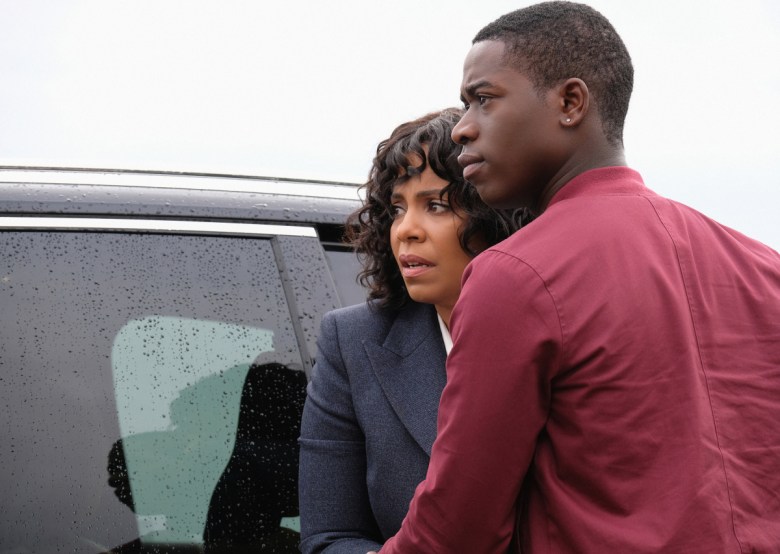 Ginnifer Goodwin didn’t even bother reading the script before she made her decision to join the show.

“Then when I did read it that night after I packed, I’ve never had this reaction to a script. I got sick from it. It hooked me in a way that made me so uncomfortable and I was very excited to go into uncharted territory,” she said. “I was up for the challenge and …I felt very appropriately cast for where my character begins and I appreciated that sort of safety. It was sort of like playing a character that then just you walk to the edge of the cliff and then are violently pushed off, and it’s like ‘let’s see what happens when she falls.’”

And even though Steven Yeun has been off “The Walking Dead” for a while now, he says that he still misses Georgia, where the show is shot. The AMC zombie show and “Twilight Zone” don’t share much in common, but he found a similar sense of determination behind the scenes.

“’Twilight Zone’ [is] taking the time to just make something that says something, it means something… it felt like ‘Walking Dead’ in that way,” he said. “‘Walking Dead’ I always felt like it was this common mission that we’re all headed to do in Georgia and much to the similarity of the feel of the show, there’s always a purpose to everything.”

”The Twilight Zone” premieres on Monday, April 1 with two back-to-back episodes on CBS All Access.

This Article is related to: Television and tagged CBS All Access, Jordan Peele, Steven Yeun, The Twilight Zone