Season 9 concludes in an appropriately chilly and somber fashion. 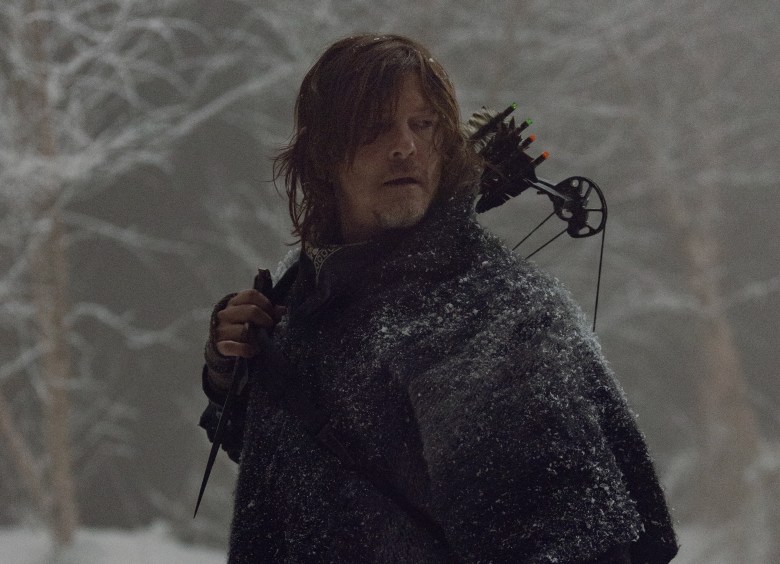 This Season On “The Walking Dead”

It’s been an oddly successful season of “The Walking Dead,” despite the many narrative stops-and-starts baked in to accommodate various “new beginnings” (both in-story and on the creative side with new showrunner Angela Kang) as well as the departure of two major characters. When your season has three time-jumps, things are clearly being shaken up, and while the initial jump forward of the premiere sought to put some distance between the (frankly, awful) Seasons 7 and 8, the departure of Andrew Lincoln meant that the opening episodes of Season 9 were all dedicated to setting up Rick’s send off, only to ultimately see him shuffled off for a movie or two, rather than the cataclysmic death the audience expected. Then came the Whisperers, and the fair, and the heads on pikes, and everything went to hell. Now one more (small-ish) time jump later, and we’ve reach the end of the line for Season 9.

What’s been most surprising is this year is how consistently solid the season has been, despite the herky-jerkiness of the plotting. There were certainly bumps in the road, like the needless obfuscation of Michonne’s newfound isolationism and the ridiculous eventual explanation, but the Whisperers have turned into a satisfyingly serious threat, with the clever machinations of Alpha and the hulking physical threat of Beta. Exciting action sequences in “Bounty” and “Chokepoint” kept things moving, and while the shocking conclusion of “The Calm Before” was a huge bummer, that was the idea, and there’s no denying the power of that episode’s grim reveal. In fact, the season’s odd tempo may have been a boon, as the show didn’t have as much time to spin its wheels as usual.

Which brings us up to Season 9’s finale, “The Storm,” which is pretty sedate by last week’s standards, but that’s to be expected, considering the level of carnage in “The Calm Before.” The episode’s A-plot — the displaced Kingdom residents must cross Alpha’s border in order to make it to Hilltop before being swallowed up by a ferocious blizzard — is largely a feint in order to focus on the characters who are still mourning their loved ones.

In particular, Henry’s death is gnawing at Lydia, Carol, and Ezekiel. For Lydia, Henry was her one true connection to her new community, and with him gone she’s left alone to bear the brunt of the others’ scorn about the Whisperers’ actions. Carol and Ezekiel lost a son and have now lost their kingdom, so they’re both adrift. Ezekiel hopes to bring Carol closer once they reach Hilltop, but she has other ideas.

Lydia spends the episode contemplating suicide, first in an effective, wordless scene where she finds a zombie frozen chest-deep and shakily brings her uncovered arm towards its snapping teeth before being interrupted by Carol. Later when Carol catches up to her again, Lydia tearfully begs for Carol to kill her. “Do it for Henry. I’m sorry it has to be you, but I’m too weak. Just like my mother said.” Carol knows a frightened child when she sees one (and also one beyond redemption), and refuses. These scenes are the best work yet from Cassady McClincy as Lydia, and McBride remains stellar as always.

Carol may be willing to spare Lydia, but she can’t stay with the King any longer. Their separation is heartbreaking but understandable, as Carol has so much guilt about Henry’s death, while Ezekiel has chosen to blame Daryl, which is not a wildly unreasonable take. He refuses to take his ring back from Carol, telling her that he’ll always love her. Hopefully these two can work it out, but I’m sure the Carol/Daryl shippers disagree.

Back at Alexandria, the Negan redemptive arc continues as Judith gets lost in the storm and Negan saves her. As Michonne thanks him, he ponders that a common enemy brought the communities together. Michonne prefers to imagine it as good people taking a stand against evil, but Negan points out that no one thinks they’re evil.

A brief note on the episode’s winter storm setting, which might be the first time on this series we’ve seen snow. “The Walking Dead” seems to be set in a perpetual, sweltering summer, so this is a stark departure from the norm. The episode makes the most of it, too, with zombies freezing solid or emerging from the snow beneath our heroes’ feet. Nine seasons is a lot of years for a show to be on the air, and if “The Walking Dead” wants to remain vital going into Season 10, it has to continue to find new ways to change up the formula like this. It’s good that the show can still surprise.