At a Netflix FYC event, producers said the Peabody Award-winning series' fate is still up in the air, despite its cancelation last year.

It could have been a bittersweet affair for the creative team behind Netflix’s Peabody Award-winning “American Vandal.” But at Thursday night’s Emmys FYC screening and panel for the faux-documentary series’ second season gave no acknowledgement of the show’s cancelation, much less its potential for revival.

However, speaking to IndieWire after the event, executive producer and showrunner Dan Lagana said that the future of the show had “yet to be determined.”

“The honest truth about the future is, we don’t know,” added co-creator and executive producer Dan Perrault. “But, we don’t look at it as a sad, final season; It’s not. Regardless of the future, each season is kind of self contained.”

There was no apparent animosity towards Netflix — understandably, as it still served as the party’s host — for its decision to part ways with the show, nor clear insight into what might come next. But it’s worth noting that the series is produced in part by CBS Studios, whose parent company is no stranger to taking on the streaming giant when it comes to Netflix shows it might like to adopt.

But those were all questions for another night, as the panel served as a celebration of the show’s second season, making its argument for more Emmys recognition, and serving plenty of insight into the documentary influences, as well as how the show changed with its graduation from dick jokes to poop pranks.

“Season 1 was structured a lot like ‘Serial,'” co-creator and executive producer Tony Yacenda explained to the audience, “where you know everything up front and you’re analyzing it from different angles.”

“Then Season 2 was more about rationing the information, like documentaries like the ‘The Jinx’ do,” Yacenda continued, pointing out that a main player in the season, DeMarcus Tillman (Melvin Gregg) didn’t step into the spotlight until Episode 3. 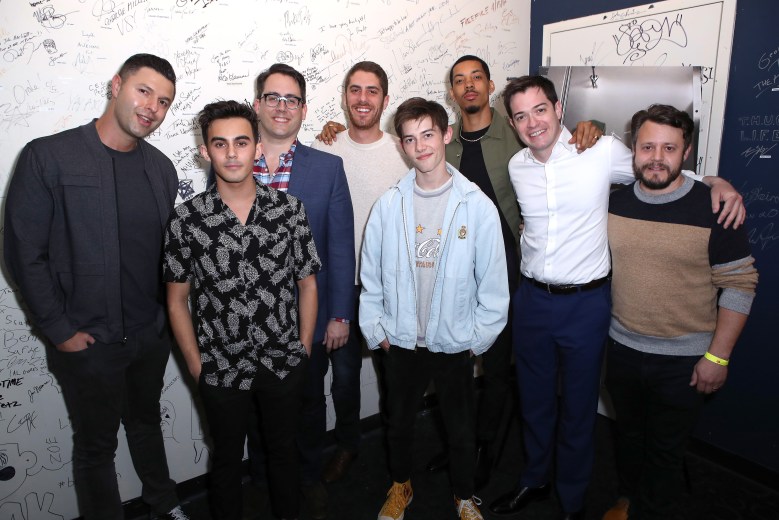 “American Vandal” producers and cast at FYC event in Hollywood.

The new season also allowed for the series to ape the style of Errol Morris’ famed documentary interview style of subjects speaking directly to the camera, as well as introducing stylized recreations of events, creating a distinctly different energy than Season 1.

But despite the mockumentary nature of the series, the producers said it’s not all about the laughs.

“We are not comedy first,” Lagana explained of the show’s writer’s room. “This is a show that is mystery first, so usually the first two weeks we’re just figuring out what happened.”

In the case of Season 2′, that’s the mystery of the Turd Burglar who uses feces and social media to terrorize an upscale private school to great effect. And with that terror came poop. A lot of poop.

“There’s two different types of poops,” Yacenda said, namechecking the Bristol stool scale and describing the poop of the crime recreations as less realistic and more like clay, whereas the poop in the on-site cell phone footage had to be “unflinchingly real poop.”

“And big shout out to the post team too,” Perrault added. “Most of the prop poops were the color of mashed-up Reese’s peanut butter cups, and not all poops are the same. So it’s also the colorist that really made it realistic and gave it the variety that our poop deserved.”

The season was about so much more than poop, though, perhaps best summarized by the show’s lead Tyler Alvarez as he referenced a line from the Season 2 finale.

“‘We’re not the worst generation. We’re just the most exposed,'” Alvarez quoted. “My parents were comparing themselves to people in their school, people in their community,” he continued. “I’m comparing myself to people around the world, to everybody, and there’s a standard that’s set and it’s not realistic.”

Added Yanceda, “We never wanted to feel like we were a bunch of thirty-somethings in a room just shouting about how much social media is ruining everything and we need to turn off our phones. That’s an oversimplification. We’ve always had a desire to put on a mask.

“The show is an ode to a generation,” he continued, “and the way in which people can connect and relate and acknowledging the challenges without damning a generation or social media in general.”

This Article is related to: Awards and tagged American Vandal, Emmys, Netflix