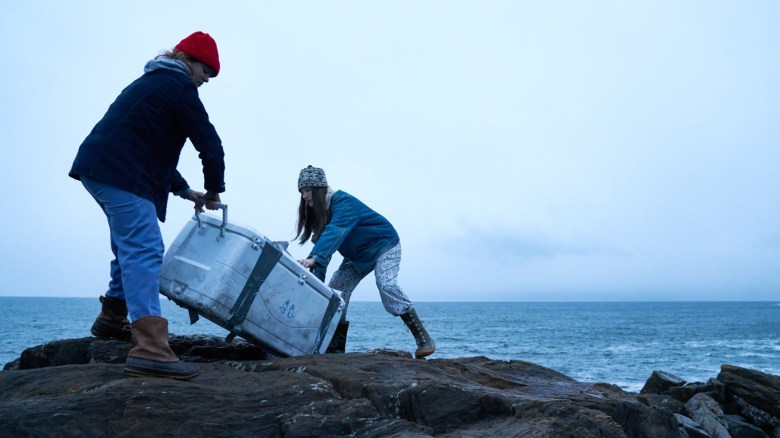 “Blow the Man Down”

It’s hard enough when Mary Margaret Connolly passes away in the sleepy Maine fishing town of Easter Cove, leaving behind two shell-shocked daughters, a house they can no longer afford, a fish shop no one seems to patronize, and enough secrets to keep the Connolly sisters scrambling for the foreseeable future. And then one of them goes and kills a guy.

Bridget Savage Cole and Danielle Krudy’s feature directorial debut lays out plenty of familiar beats in their Coen brothers-esque crime comedy, from a bloody murder to a bag of cash, all enlivened by some wonderfully distinct accents, but the pair also find their way to a unique new story that signals their arrival as a filmmaking duo to watch.

Priscilla (Sophie Lowe) and Mary Beth Connolly (Morgan Saylor) have long occupied different stations in their small family — “Pris” has always been the stable, grownup one, while Mary Beth seems secure in her more flighty nature — and while the year-long illness of their mother has only further crystallized those roles, it’s also unearthed some long-simmering irritations. On the night of their mother’s funeral, while Pris toils in the kitchen, Mary Beth flees to a local watering hole to let off a little steam, and that’s where she meets the alluring but also deeply creepy Gorski (Ebon Moss-Bachrach).

That a tiny town like Easter Cove, filled with people who have known each other for decades and have nursed their own resentments for just as long, would have some weird stuff going on underneath the surface isn’t surprising. And yet the way Savage Cole and Krudy nimbly reveal what’s really going on in the fishing hamlet — and the part that the Connolly sisters, their dead mother, and flashy bed and breakfast owner Nora (the always wonderful Margo Martindale) all play in it — isn’t initially expected. That’s not to say that it doesn’t grow satisfying over the course of the 90-minute pitch black comedy.

Though “Blow the Man Down” is primarily fixated on the Connolly sisters, Savage Cole and Krudy’s script steadily introduces other players, including Gayle Rankin’s outsider Alexis, a pair of not-quite bumbling cops (Skipp Sudduth and Will Brittain), and Mary Margaret’s dearest friends (a snappy Annette O’Toole among them). While Pris and Mary Beth’s accidental foray into violent crimes could fill its own feature quite handily, “Blow the Man Down” uses it as a wily entry point for exploring the dark comedy of an idyllic town that has one hell of an underbelly.

Primarily led by a female cast, the film is generous with its large assortment of characters, allowing Martindale to predictably shine alongside rising stars like Saylor (who becomes more child-like as the story spins into wild new corners) and Lowe (who makes off with the film’s most poignant performance). On occasion, a Greek chorus-like cadre of local fishermen arrive to sing some local sea shanties, a risky proposition that Savage Cole and Krudy pull off: It’s weirdly funny and specific in all the right ways.

Bolstered by an off-kilter but amusing score from Jordan Dykstra and Brian McOmber and razor-sharp editing from Marc Vives, the film is smartly assembled, making the most of a limited indie budget and building a compelling world to boot. While a second act attempt to introduce still more players into a criminal enterprise doesn’t click, Savage Cole and Krudy quickly revert back to what’s working, smart enough to know exactly what that is and recognizing why they’re such a crack team at making it.

”Blow the Man Down” has its world premiere at the 2019 Tribeca Film Festival. It is currently seeking U.S. distribution.

This Article is related to: Film and tagged Blow the Man Down, Reviews, Tribeca