Roxanne Benjamin's feature directorial debut feels like a throwback to a time when horror movies weren't afraid to bop around and have fun. 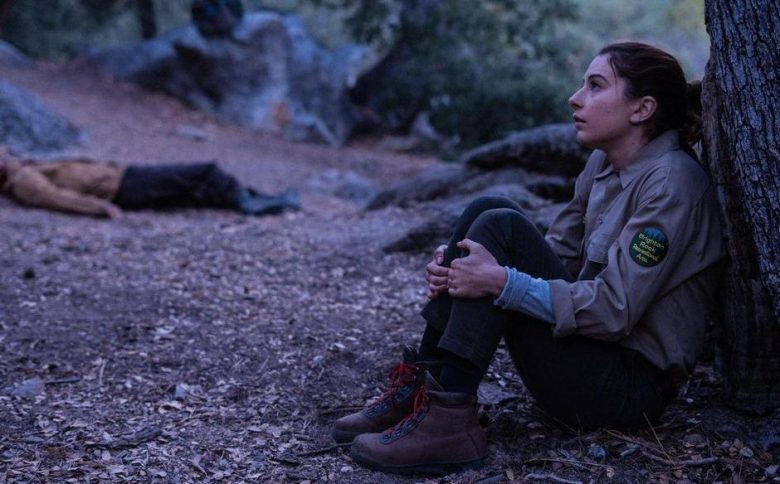 At a time when so many low-budget indies seem resigned to streaming, Roxanne Benjamin’s fun and forgettable “Body at Brighton Rock” feels ready-made for a Friday night on your couch. It’s a total slumber party of a movie, told with plenty of skill, even more potential, and an utter lack of preciousness from its delightful opening moments to its enjoyable shrug of a last-minute twist. A large part of that appeal is owed to the throwback vibe of a movie that eschews straightforward nostalgia in favor of a subdermal longing for a more innocent time. Benjamin is a rising star with deep roots in the horror world (previous credits include producing “V/H/S” and directing segments in anthology offerings “Southbound” and “XX”), but even her bright future is tied to the past (upcoming projects include a remake of the 1984 cult classic “Night of the Comet”).

“Body at Brighton Rock” is the happy work of someone who misses when scrappy genre fare could have low stakes and still feel slightly dangerous; when filmmakers were empowered by the knowledge that a VHS of their schlock took up just as much real estate on video store shelves as a tape of the biggest Hollywood blockbuster. That might sound like a backhanded compliment, but it’s a real pleasure to watch a self-contained nugget of casual horror wear its thrills so lightly, and to operate on a more human level as a result.

If it doesn’t always feel as though Benjamin has the tightest grasp on her film’s tone, perhaps that’s because she nails it so well right out of the gate. “Body at Brighton Rock” kicks off with a harpsichord flourish from The Gifted’s giallo-inflected score, a slap-happy title treatment that screams “good times,” and an Oingo Boingo song from 1987 that helps destabilize the temporarily of a story that explicitly takes place in the present day. Wendy (the spunky and intuitive Karina Fontes) saunters into view without a care in the world, completely oblivious to the nightmare that Benjamin is building for her.

Wendy is the least competent of the ragtag group of part-time park rangers who’ve been scrounged up to keep things safe on the trails around Brighton Rock (arrestingly played by California’s San Jacinto Mountains). Which isn’t to say that she’s dumb, just that she isn’t particularly well-suited to the job; she’s an indoor girl in an outdoors world. That’s effectively all we ever know about her, as Benjamin’s script is pretty short on character development, but it’s enough for us to be nervous for her when Wendy is given a dangerous assignment. Her co-workers aren’t shy about their lack of faith in her ability to hack it alone out in the wilderness, and it’s easy to appreciate why. “Never hike alone!” reads one of the trail signs that Wendy comes across, and it feels as though it were written specifically for her.

So when our bubbly heroine gets lost in the hills (after a long and slack bit of scene-setting), stumbles upon a fresh-ish corpse, and is instructed to wait at the potential crime scene until people can get there the next morning, Wendy freaks out. She’s tempted to flee the scene, but everyone at work already expects her to fail, and the only thing worse than spending a dark night with a dead man would be proving them right. And so begins a spine-tingling saga about someone who may be even less equipped for the great outdoors than the average viewer, as this is basically what might happen if a “final girl” from a gooey slasher movie wandered into a survival thriller.

If nothing else, “Body at Brighton Rock” is the perfect film for anyone who’s ever watched a film like “Cast Away” and laughed at how fast they would die in such a dire situation. At one point, when an ominous man named Red (Casey Adams) stumbles onto the scene, Wendy manages to reveal her position and lose her radio in one fell swoop. Fontes’ performance gracefully walks the line between idiocy and helplessness, and always manages to land on the right side that each moment requires.

For her part, Benjamin is a bit less consistent. She has a flair for style, but seems hesitant to make use of it; zooms, jump-cuts, and eerie suggestions are all deployed with verve and impact, but much of the movie is told via flat medium and wide shots that focus more attention on the threadbare plot than it can support. Without fail, Benjamin’s direction is always more compelling when she cuts in close for a more subjective perspective of Wendy’s experience. It can be fun to watch as Wendy gets herself into increasingly hairy situations, but the character is so thin — and the mystery of the dead body somehow even thinner — that it’s more satisfying to live through this ordeal from her POV. At least she seems as confused as you might by an amusingly ridiculous last-minute twist that feels borrowed from an R.L. Stine book, and ends “Body at Brighton Rock” with the same bouncy, anything goes attitude with which it began.

From a certain angle, it’s possible to read “Body at Brighton Rock” as a funky autobiography of sorts; as the work of a young, rising filmmaker who’s trying to get her feet wet — and maybe get over some fears of her own — before finding her rightful place in the world. The film might be frivolous and somewhat half-formed, but it’s more than enough to make anyone feel very stupid if they expected Benjamin to fail.

Magnolia and Magnet Releasing will release “Body at Brighton Rock” in theaters and on VOD on April 26.

This Article is related to: Film and tagged Body at Brighton Rock, Reviews, Roxanne Benjamin