The production designers for "Captain Marvel" and "You're the Worst" had to recreate an endangered species of retail outlet — and it wasn't easy. 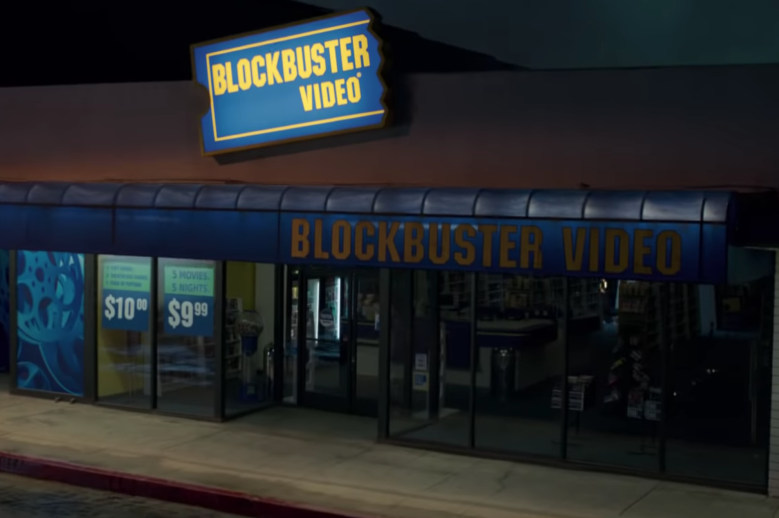 “The neighborhood of 2,800 to 3,000.” That’s how many VHS tapes production designer David DiGiacomo needed to bring together while creating the set for the Season 5 premiere of “You’re the Worst,” largely located in a ’90s-era video store.

“You’re the Worst” wasn’t the only project this spring to feature an endangered species of retail outlet — the Marvel blockbuster “Captain Marvel” included a short but memorable scene in which its own ’90s superhero crash-lands into a period-accurate recreation of a Blockbuster Video.

According to “Captain Marvel” production designer Andy Nicholson, “in some of our early concept art, she landed outside the Blockbuster, past a billboard. We spent ages choosing what that billboard could be. But then we decided to get rid of that as an idea and she just goes through the roof. It’s just more direct.”

Both “You’re the Worst” and “Captain Marvel,” however briefly, drew upon the public’s latent memory of a time when, in order to watch a movie at home, you had to travel to a physical location and acquire a VHS tape. And doing so was a production challenge that caught at least one of the creators off guard.

As DiGiacomo put it: “I would tell anyone else trying to do it. It’s not for the faint of heart.”

“You Can’t Do That With Video Cassettes”

In “You’re the Worst,” the (fictional) video store Video King is central to an elaborate lie being told by Gretchen and Jimmy about their origin story, which depicts their love as being born between film nerds in search of an unfindable film.

And when creator Stephen Falk and the writers came up with the idea for “The Intransigence of Love,” they didn’t know at that point what they were asking the production team to produce. “Us writers sit in our little cloistered solo room not having any input, because those people aren’t even on the clock yet, and so we’re just, ‘La, la, la. Let’s do this. Let’s do that.’ Then, we hand the tens and hundreds of production people these problems.”

Meanwhile, when DiGiacomo read the script, he described his first reaction as “Alarm bells went off. And then when I learned that it was a mid-’90s video store, it got a little louder.”

Creating the indie video store of Falk’s dreams did happen, however, because as he said, “our team is so talented. They were able to make exactly what we needed to happen.”

And in fact, according to DiGiacomo, “I know from experience that once you start digging into things, you put one foot in front of another — things tend to often be a little easier than they seem at first. You can solve most problems.”

By comparison, Nicholson said that making the Blockbuster was one of his easier challenges on “Captain Marvel” — but, in fairness, that’s in comparison to creating multiple alien spaceships. Also, he said, “we fortunately found a strip mall in the Valley which dated from the ’80s, and shut down five or six years ago that had a whole bunch of places. So that gave us a starting point for recreating a whole bunch of stores, not just Blockbuster.”

The biggest issue was for the set-dressing department, because like “You’re the Worst,” “getting a hold of videos from 1996 in quantity took a lot of time. There’s not that many of them around, not many people keep them, especially not with the white covers.”

So the team had to make “a whole load” of Blockbuster Video sleeves, and buy a lot of stuff off eBay. “For filling a library on a movie, you can rent books by the foot. You can’t do that with video cassettes,” Nicholson said.

“In terms of the videos, we looked at the top 20 films in the middle of the year and were able to find out what the big rentals were then,” he added, “Then, the actual number one through 20 you see in the store is what would have been in Blockbuster. We had fun getting those kind of things right.” 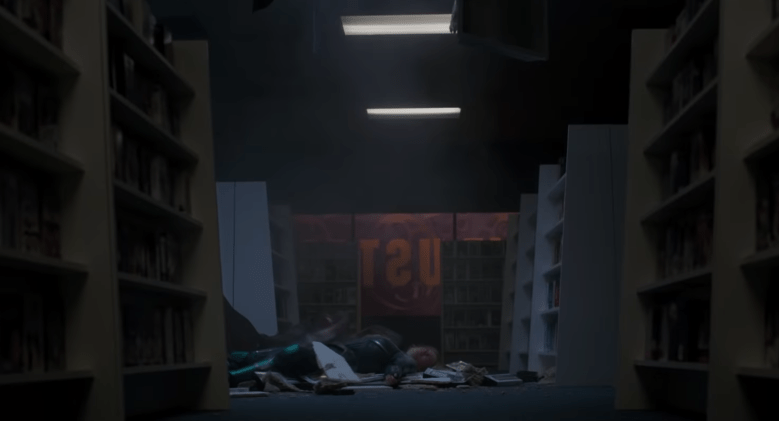 “You’re the Worst” had one big advantage going into production — it managed to find one of the few remaining operational video stores on the planet to shoot in, specifically the independent West Los Angeles institution Cinefile, which has been in business since 1999.

The show has used a mix of real locations and studio sets over its run, and shooting in a real indie store was helpful for DiGiacomo because “they have a lot of idiosyncratic visual aspects about them, and that was a rich field for us to get ideas from as well. There was a lot of texture and detail in these stores that we thought was still valid that we would be able to utilize, that we wouldn’t have to totally recreate from scratch.”

When it came to choosing the movies available onscreen, Falk said, “David and his team would sort movies that we could legally clear to show not only from our parent company, but from other places. Then he would hand me sheets of what I could have, and I would circle the ones I wanted or X out the ones I didn’t. I just picked things that felt very iconic, of the moment.”

One thing that made the process easier: “You’re the Worst” is a part of the Fox family, and so Fox properties were easier to clear. “If we hadn’t been a Fox subsidiary, it would have much more difficult. Much more difficult to create that sense of realism in there,” DiGiacomo said.

Filming at Cinefile had its advantages — for example, DiGiacomo said that according to the show’s legal team, the classic movie posters already hanging higher on the walls were okay to be shown onscreen “if we didn’t feature them. Meaning that you don’t start a shot on them, or talk about it in the dialogue, and show it prominently in the background.”

Production only had two days to transform the location into a ’90s-era store peddling VHS, which did mean basically replacing every DVD or Blu-ray title on the shelves with approved tapes. “We basically shrank-wrapped some of their mobile racks, and we just pulled them right out of there, and put them on the truck. And then there were a couple others that we dressed the front, and we left their DVDs on the back,” DiGiacomo said. “And we put those up against the windows in the front of the store to block modern cars. You could still see movement, but you couldn’t see what the vehicles were kind of going outside. And you couldn’t really see what was behind our videotapes.”

“We Always Wanted It to Be Arnold”

Key to both sets was perhaps the most eye-catching element: cardboard standees advertising movies of the era. In the case of “Captain Marvel,” the choice to include a big ode to the 1994 James Cameron film “True Lies” (which Carol Danvers ends up blasting away), was because, Nicholson said, “We always wanted it to be [Arnold Schwarzenegger].”

There was the possibility of using “The Terminator” as well — “which would have been sooner period wise. It was mainly that it was just a fun thing to have as silhouette.” But “True Lies” had “the right pose, a man holding a woman.”

The most difficult part of the process was getting Schwarzenegger’s approval to use his likeness, because the actor and former governor was in the hospital at the time. “We had to wait quite a while to get him to actually say yes. His agent, his manager, no one would give the OK apart from him,” Nicholson said. “So [executive producer] Jonathan Schwartz had to make a bunch of phone calls to get through him to get an OK.”

In the case of “You’re the Worst,” DiGiacomo drew upon the Fox library once again, licensing a few period-appropriate films and getting digital files of the posters, which the team was then able to use to make cutouts from scratch — the chosen films in question were “Airheads,” “Toys,” and “Buffy the Vampire Slayer” (perhaps the most noticeable one of the episode). “We chose them because we thought that the graphics that we had them from would lend themselves to a cutout, as opposed to some others that weren’t gonna really look good as a cutout. And then we sent it back to Fox to get their permission to use it in that way,” he said.

Falk acknowledged that having access to Fox properties was a major advantage, especially for the standees. “We were pampered by what was available to us, and [‘Buffy the Vampire Slayer’], the artwork is just so iconic for me, and it stuck in my brain. I thought it would be a good one to have,” he said.

“I Don’t Think Limitations Are Bad in Life” 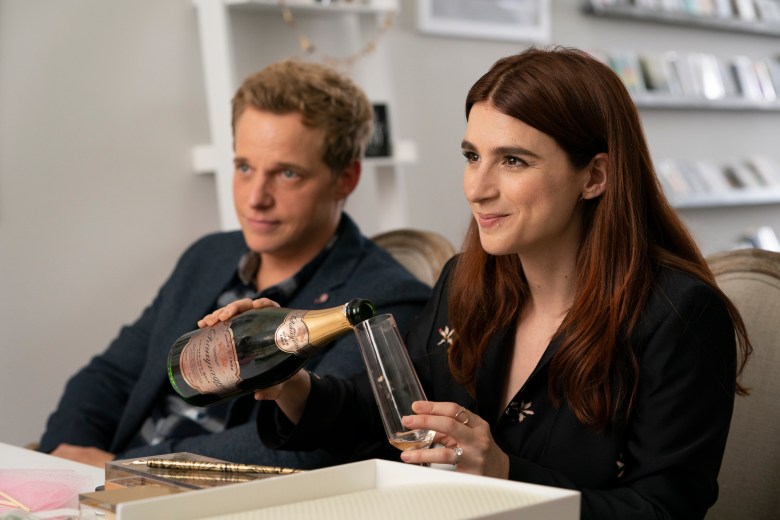 All of these men felt some lingering nostalgia for what they’d recreated for the screen. “In that model basically you went, and you looked at a physical thing, and you interacted with people. And you had individuals in the store, the staff picks that you’d look at. Or you’d listen to, look at, read about a critic’s review of a movie. And now you have basically algorithms. And you’re sitting in your living room by yourself, and you’re finding all this stuff,” DiGiacomo said. “We have all these things that have been made available to us because of digital formats. But it also at the same time kind of disconnects from actually interacting with other human beings.”

“They were great while they were the technology that worked. As soon as DVDs came out, it was way better. Then as soon as Blu-rays came out, it kind of closed it all off,” Nicholson said.

Falk, who in his teenage years was an indie video store clerk, remembered his job experience as “magic,” and so in writing the episode, he said, “we really wanted it to feel like a loving embrace, not a satire.”

He has little sadness over the demise of Blockbuster Video, “because they were the big evil empire crushing all the mom-and-pop stores that actually carried good movies… Blockbuster was ugly and had video games, which was fine, and helpful at some point, and candy. I detested that place. I really did.”

But Falk did feel that “there’s an inherent problem in the availability of everything at all times. There’s a devaluing where something is just library content, and that seems to be what the streamers are reducing movies and also television, too, just by nature of how the technology works. I don’t think I’m alone in saying that it’s a lot harder to decide in a satisfactory way what to watch when you’re sitting in front of your TV faced with the availability of everything.”

As he continued, “I don’t think limitations are bad in life. I think, if at any moment when you get in bed with your significant other, if you could suddenly program that to be any other man or woman in the world, it would devalue love, and destroy relationships, and nothing would be special anymore. I feel that way about streamers.”

This Article is related to: Television and tagged Andy Nicholson, Captain Marvel, Stephen Falk, You're the Worst