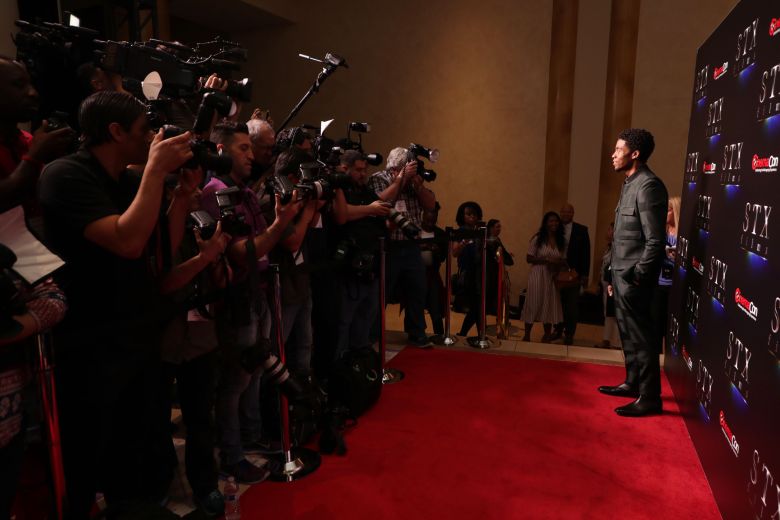 It’s a familiar reframe: for his first post-“Black Panther” role, actor Chadwick Boseman wanted to do something a little different than the blockbuster Marvel Cinematic Universe work that has dominated his schedule for the past couple of years. The solution is “21 Bridges,” the kind of film that’s in short supply in the Hollywood studio system, an original mid-budget action film that combines the intelligence of a David Mamet play and the heart-pounding drama of, well, a really good superhero film.

Boseman was on hand at STX Entertainment’s Tuesday morning CinemaCon presentation to chat up the Brian Kirk feature, which he stars in and also produces (funnily enough, alongside his Marvel directors Joe and Anthony Russo). STX chairman Adam Fogelson introduced the first trailer for the film, which is gearing up for a July 12 release, and the first look at the New York City-set crime thriller offered strong evidence for Boseman’s post-“Black Panther” career.

The film also stars Sienna Miller, Taylor Kitsch, J.K. Simmons, and “If Beale Street Could Talk” breakout Stephan James, who all play various characters caught up in a crime gone terribly awry. Early on, we learn that Boseman’s character lost his cop father at a young age, and as an adult, he’s become a dedicated investigator in his own right. When a robbery goes very wrong and leads to the murder of eight NYPD cops, Boseman’s character steps in to enact an ambitious city-wide manhunt that includes the closing of the eponymous 21 bridges that lead out of Manhattan. But there’s more than meets the eye, and even in just an extended trailer, it seems clear that something else is going on in “21 Bridges.”

“That was intense,” Boseman cracked to the packed Colosseum crowd after the footage wrapped up. “I don’t see it getting less intense any time soon,” Fogelson added, noting that Boseman continues to be in very high demand after the success of Ryan Coogler’s “Black Panther.”

But making “21 Bridges” was very important to the actor, and he explained why he opted to turn his attention and skills to the film, when plenty of other big opportunities were surely calling.

Asked why he wanted to make the film, Boseman said, “Several things, I would say that it was combination of being able to have a fast-paced action movie. When I read the script, I could tell that this was gonna be a ride, it’s a ride when you watch it. At the same time, it took me back to my theater days, where you have that fast-paced language, like David Mamet, that New York feel. I feel that this movie sort of captured that combination of things.”

The film also offered Boseman something a bit more meaty: a new producing gig, his first since 2017’s “Marshall.” “It was also an opportunity to produce, to see a project from the beginning to the end, and effect it in that way,” he said.

Fogelson noted that Boseman-as-producer was key when it came to a number of casting choices, including getting “Beale Street” star James on board, a fellow talent that Boseman is especially excited about. “Just seeing him rise,” Boseman said. “And saying, ‘no, this is gonna be the guy, he’s gonna be great’ … I called that one!”

In order to train for the film, Boseman tagged along with both NYPD and LAPD officers, an experience he deemed both “a lot of fun” and also occasionally challenging. “At times, it was a lot of fun hanging out with them, but at other times, it was horrific, some of the things that you experience, them talking about and showing you,” he said. “It definitely put me in the mindset of the character. One of the things that they talk about a lot is just how the job effects them personally, how the job takes over their entire lives, and I think that’s definitely in this film that we try to stay true. It was a great experience, a life-changing experience spending time with them.”

This Article is related to: Film and tagged 21 Bridges, Chadwick Boseman, CinemaCon