In the Season 2 finale of the YouTube Premium series, a rumble between Daniel and Johnny’s students has serious consequences. 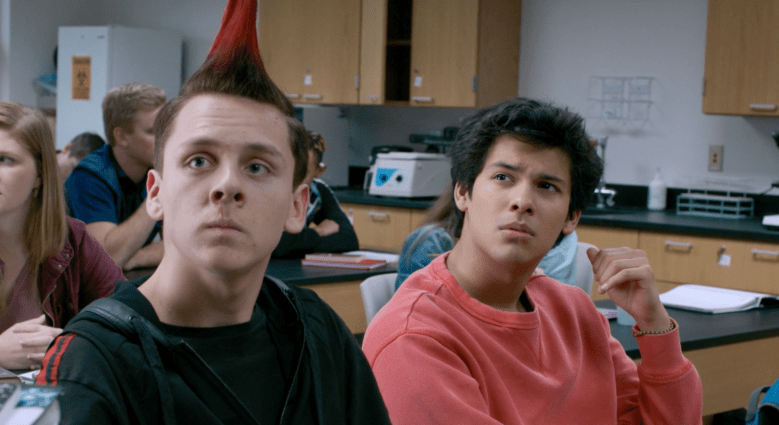 [Editor’s Note: The following contains spoilers from “Cobra Kai” Season 2, including the finale.]

In the Season 2 finale of the “Karate Kid” sequel series “Cobra Kai,” the students from rival San Fernando Valley dojos don’t wait for a tournament to challenge each other. Instead, high school becomes the backdrop for a no-holds-barred rumble between the Miyagi-Do and Cobra Kai teens, and woe to anyone — even the teachers — who get in the way of their flying fists and feet. Without rules or regulations, the brawl spills through the hallways and even up a staircase, ultimately ending with a possibly fatal fall.

IndieWire spoke to series co-creators Jon Hurwitz, Hayden Schlossberg, and Josh Heald about turning high school into a literal school of hard knocks for the finale and possibilities for Season 3:

“We looked at things like ‘The Outsiders’ and ‘West Side Story’ as classics that took these Shakespearean relationships and thrust them into a big brawl,” said Schlossberg. “This has the feeling of what you get out of the All Valley Tournament with different fights, but the challenge is finding the order in the disorder because it’s not a tournament, it’s just a melee. And so, we spent the entire season building up these rivalries, so that when this big moment happened, you can break off into different stories within the fight, special moments for each of the rivalries.

“It’s similar to climax in a Star Wars movie, where the war is happening on three different fronts. We tried to build the school geography out, so that there was a progression going from downstairs, to the stairs, to upstairs, while branching off to different parts of the school. Ultimately, it feels like this big epic climactic brawl, but in reality, we had only a few days to shoot it and a few days to prepare for it.”

Most of the young cast didn’t know karate before coming onto the show, but it’s not apparent from watching the big fight.

“When they’re not shooting, they’re in the mobile dojo that we have going around with us. They’re open and available and eager any time they could get training and time with the stunt coordinators [Hiro Koda and Jahnel Curfman], who weren’t given a lot of time and had to do a lot of things on the fly,” said Hurwitz.

“And there’s a lot of safety concerns. You have these big juicy thoughts and ideas, and then on the day, you’re like, ‘Okay, well, wait a second, these are kids. How are we going to actually do this?’ So they did a great job having a safe set and that carried out our vision with very little time.” 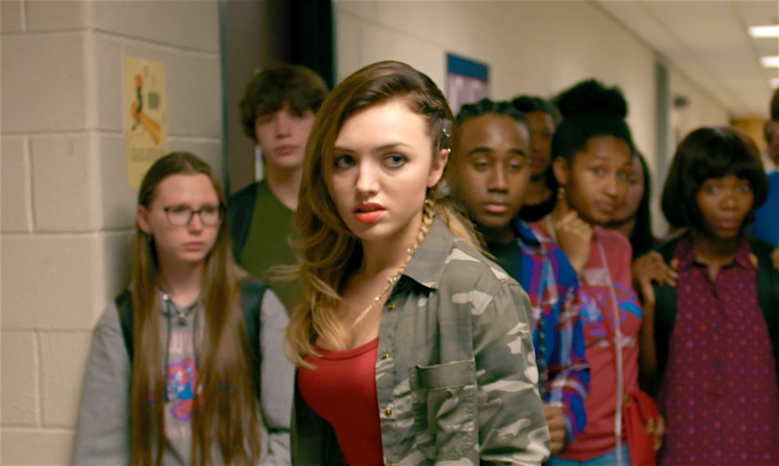 Although the rivalries were created throughout the season, the spark that ignites the dojo vs. dojo powder keg is one very angry and jealous teenage girl. Tory (Peyton List) is a new Cobra Kai member this season who enjoys the dojo’s “No mercy” creed, even though sensei Johnny Lawrence (William Zabka) has actually been speaking out against that mindset.

Tory has been dating Cobra Kai star pupil and Johnny’s protege Miguel (Xolo Maridueña), which would seem perfect except that he’s still hung up on his ex-girlfriend Samantha LaRusso (Mary Mouser), the daughter of Miyagi-Do instructor Daniel LaRusso (Ralph Macchio). Meanwhile, Sam has been dating Miygai-Do member Robby (Tanner Buchanan), who happens to be Johnny’s estranged son. When Tory catches her rival kissing Miguel during a drunken farewell to summer party, she returns to school out for blood.

“We always wanted there to be a rivalry that develops in the school as a result of Johnny and Daniel’s past, that trickles down to the students today,” said Schlossberg. “We like the idea of their being a female student that she’s completely at odds with. Tory is a girl who already knows a few things, who has some kickboxing experience and represents the female student in Cobra Kai who comes from a tough background, who could look at Samantha LaRusso as somebody who’s a spoiled Encino, privileged girl.”

List is a veteran of Disney Channel shows like camp comedy “Bunk’d” and the teenage spy show “K.C. Undercover,” but the “Cobra Kai” producers were unfamiliar with her resume.

“To see her Disney Channel stuff now is shocking to us,” said Hurwitz. “Mary Mouser is fantastic at karate at this point, but she’s shorter in stature. We wanted somebody who was a rival that can be intimidating to her in a physical way, and when we saw Peyton’s audition, she just was totally badass and very intimidating in a way that she would be a legitimate threat to Samantha LaRusso.” 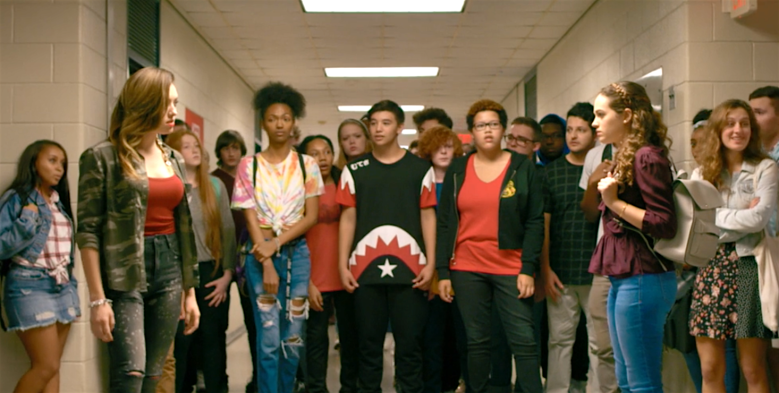 There’s no hint of that Disney past in Tory, who is so bent on defeating her opponent that she whips out banded spikes that she straps over her knuckles. At one point, she uses them to tear at Sam’s tricep and would have moved on to her face but was stopped just in time.

“When we first meet Tory, she references she knows how to handle herself – and even shows off a similar spiked bracelet to Aisha (Nichole Brown),” said Heald. “Tory is a survivor and a fighter. She easily relates the ‘No Mercy’ mantra of the Cobra Kai dojo to the journey of her own life. In a moment where she’s cornered and threatened, she calls upon that very creed, doing anything it takes to gain the upper hand, without thought in the moment to inflicting damage or injury. She’s only got winning on the mind.”

The Brawl and the One-er

Tory and Sam’s battle sets off all the rest of the Miyagi-Dos and Cobra Kais brawling in the hallways. Although the entire brawl lasts around 10 minutes — from Tory throwing the first punch to Miguel’s shocking finish — there’s a brief but complicated, one-take sequence that travels around the hallways to capture most of the students fighting. It required tight choreography, one Steadicam, and many rehearsals to get the natural movement right.

“It’s roughly 82 to 85 seconds, where you see all of our main kids as well as some stunt performers who are also students in the Cobra Kai and Miyagi-Do dojos all fighting in one hallway,” said Hurwitz. “It begins with Moon (Hannah Keppel) coming through and saying, ‘Can’t we all just get along? and ends with Stingray (Paul Walter Hauser) entering and trying to regulate the situation.

“All of our cast took their own time on the weekend and got together with the stunt team to work through that. Hiro Koda has his own Steadicam, and he worked it through and did it over and over again until they perfected it. And then Hiro was able to teach our official Steadicam operator the moves and only had a half hour to do it, and he delivered amazingly well. So it was really a huge team effort with a wide array of people in front of the camera, behind the camera, working their butts off to pull this off.”

The limited time frame also required that each of the more personal face-offs that occurred after that sequence be shot simultaneously.

“A lot of what you see in that school fight, after seeing Stingray comes down the hall and cleans everything up, the three of us [executive producers] shot on the last day of production in Atlanta,” said Heald. “We had two or three units going simultaneously. We had a cinematographer who was comfortable letting one of us grab a camera and go down the hall to shoot the Chris versus Mitch fight, or Bert versus Nathaniel.

“And someone else takes a camera and runs to the computer lab for the against Hawk versus Demitri because we have to keep moving everything forward,” he continued. “There’s stunts, and there’s Texas switches, and there’s pads, and there’s wires. We were so amazed that we were able to capture as much as we had hoped to get.”

Page 1 of 2
Continue Reading: ‘Cobra Kai’ Bosses Break Down That Epic Ending and What It Means for Season 3