Daniel LaRusso and Johnny Lawrence take their rivalry to the next level in the YouTube Premium series premiering April 24. 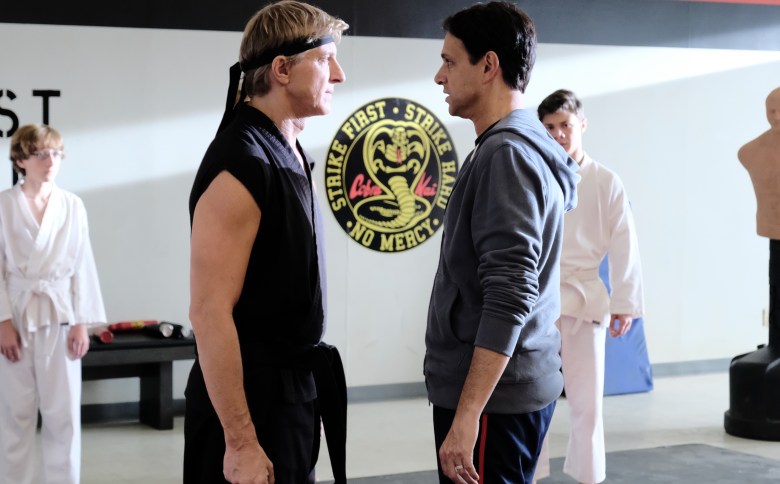 Forget “Game of Thrones” and “Avengers.” When “Cobra Kai” debuts its second season on Wednesday, April 24, it’s time for war. YouTube Premium’s “Karate Kid” sequel series picks up where it left off with Daniel LaRusso (Ralph Macchio) opening his own dojo, Miyagi-Do Karate, in the wake of his rival Johnny Lawrence’s (William Zabka) Cobra Kai dojo winning the All Valley Karate Tournament.

“We always loved the idea of these two rival dojos competing for the soul of the Valley,” said Hayden Schlossberg, who co-created the series alongside Josh Heald and Jon Hurwitz. “There was something that was fun about that for us, but it also provided the types of stakes that could lead to awesome scenes. Thematically, this season is about showing mercy.”

In Season 1, successful auto dealer Daniel comes out of karate retirement when Johnny reopens the Cobra Kai dojo to teach kids who have been bullied to fight back. But Daniel has dealt with Cobra Kai’s “Strike First. Strike Hard. No Mercy” teachings and can never forget their dirty dealings.

“He’s now seeing Cobra Kai back on top and he knows what happens at least in his youth when Cobra Kai were the champs and they ran amok all over the Valley,” said Heald. “They were led by a person who had a philosophy about karate and about the world that didn’t teach martial arts in a way that was proper in Daniel’s opinion and didn’t set up the kids to be well-rounded individuals.

“What he views as the antidote for that is Miyagi-Do karate. It comes with this sense of responsibility of, ‘I have this powerful tool that in the past has counteracted Cobra Kai karate. What do I do with that? How do I do it responsibly, and am I worthy of my sensei, Mr. Miyagi?’ who Daniel holds in extremely high regard.”

Meanwhile, Johnny doesn’t know what LaRusso’s problem is. Johnny has emerged from three decades’ worth of backwards living in a dead-end job and no connection to the modern world. He’s just trying to be a good sensei and mentor his protege Miguel (Xolo Maridueña), especially after his own son Robby (Tanner Buchanan) went to learn from his rival. Building up Cobra Kai has given him renewed purpose and a way to right past wrongs. 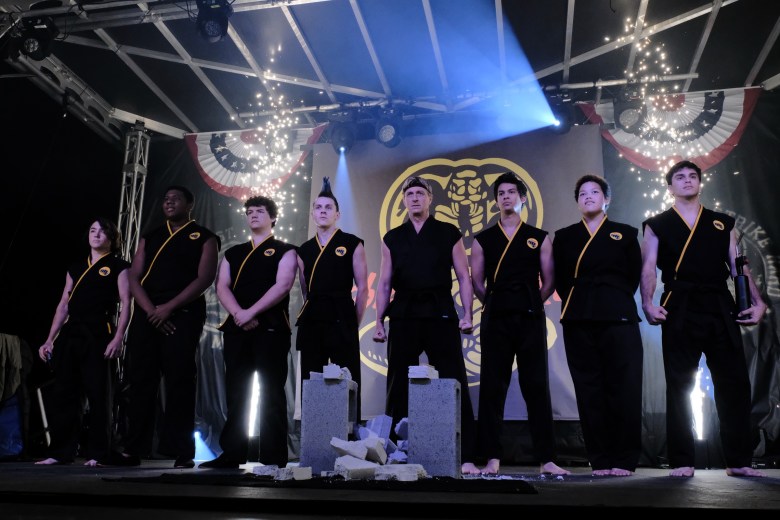 “He goes into the season with the best expectations, thinking, ‘I know what’s wrong with Cobra Kai. I’ll fix that, and I’ll make it work.’ But it’s not that easy, he learns,” said Schlossberg.

“This season we wanted Johnny to continue his redemption and his education. We love the idea that as he learns more about what it means to be a moral person, he’s also learning about the internet, modern terms and phrases, online dating, and all of that stuff.”

Johnny also has to contend with the return of his old sensei John Kreese (Martin Kove), who appears at the end of last season. In the original “Karate Kid” film, Kreese was a harsh taskmaster and became physically violent after Johnny lost to Daniel at the All-Valley. “If he ever expects to have his own estranged son love and respect him, Johnny wonders how he should be acting towards this new father figure who wants to be in his life,” said Schlossberg.

As the two dojos teach their respective students the differing ways of karate, the students pick up on their senseis’ antipathy for the other group. This leads to a big finale where the two dojos face off in a fresh new arena.

“Going into the season as a whole, we knew from the get-go that we weren’t going to do a show where there was a All Valley Karate Tournament at the end of every season,” said Heald. “That would get very old, very quickly. And we’d have to keep upping the ante with that, where someone would have to bring a gun. So that was off the table.

“But at the same time, we have upped the stakes, where now there were two competing dojos, way more kids who know karate, kids who have a lot of time on their hands in the summer,” he continued. “So [we were] presented with an amazing opportunity to give us a new arena for the explosiveness of the action to come.”

Watch the trailer for “Cobra Kai” Season 2 below:

“Cobra Kai” Season 2 is available on YouTube Premium on April 24.

This Article is related to: Television and tagged Cobra Kai, The Karate Kid, YouTube Premium