James Marsden, Ed Asner, and Brandon Scott also co-star in the series premiering in May. 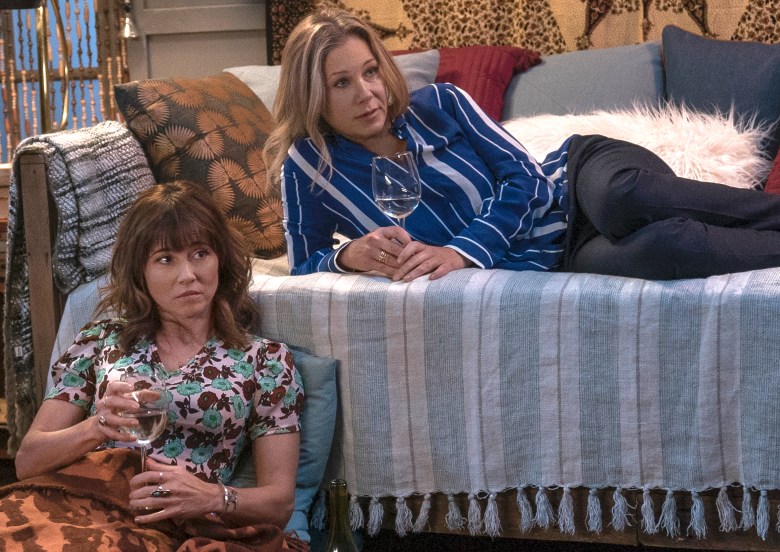 Linda Cardellini and Christina Applegate, “Dead to Me”

There’s a time and place for Mexican lasagna, and grieving one’s husband may not be it. In the new dark comedy “Dead to Me,” coming to Netflix in May, Christina Applegate and Linda Cardellini are newfound gal pals who relaunch their own lives after the recent deaths of their loved ones. In the trailer below, Jen (Applegate) has lost her husband and joins a grief counseling group, where she meets Judy (Cardellini). At first the two are united by grief and dealing with people saying all the wrong things, but an extra mystery changes their dynamic.

The show marks a welcome return to television for the pair. Applegate is best known for her roles on “Married… With Children” and “Jesse.” She earned an Emmy for her guest appearance on “Friends.” Her last foray in TV was a spot on the Fox series “The Grinder.” On the big screen, she starred as Gwendolyn in the “Bad Moms” franchise.

Cardellini broke out with the beloved “Freaks and Geeks,” has done a slew of animated voice work and received an Emmy nomination for her role as Meg Rayburn in “Bloodline.” She has found recent success with movies, with roles in “Green Book” and “A Simple Favor.”

Here’s Netflix’s official description for “Dead to Me”:

Jen (Christina Applegate) is a sardonic widow determined to solve her husband’s recent hit-and-run murder. Judy (Linda Cardellini) is an optimistic free spirit who’s recently suffered her own tragic loss. When the two women meet at a support group, they become unlikely friends despite their polar-opposite personalities. But as they bond over bottles of wine, Entenmann’s cookies and a shared affinity for “The Facts of Life,” Judy desperately tries to shield Jen from a shocking secret that could destroy her life as she knows it. “Dead to Me,” created by Liz Feldman (“2 Broke Girls,” “One Big Happy”), is an addictive dark comedy that dives into the painfully unfiltered, weirdly funny waters of grief, loss and forgiveness.

“Dead to Me” will be released globally May 3 on Netflix.

This Article is related to: Television and tagged Christina Applegate, Dead to Me, Linda Cardellini, Netflix