Can Jharrel Jerome or Jared Harris hold back a slew of heavy-hitting Oscar winners? [Updated September 16] 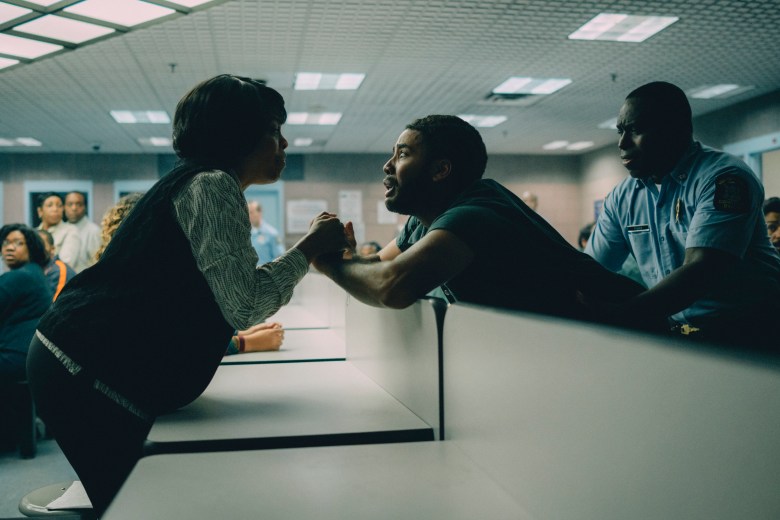 Niecy Nash and Jharrel Jerome in “When They See Us”

Last Year’s Winner: Darren Criss, “The Assassination of Gianni Versace: American Crime Story”
Still Eligible: No.
Hot Streak: An actor from “American Crime Story” has won for each of the FX franchise’s nominated seasons. Darren Criss won in 2018 for “The Assassination of Gianni Versace” and Courtney B. Vance won for his role as Johnnie Cochran in “The People vs. O.J. Simpson.” “American Crime Story” is also the only program to win more than one trophy in the Best Limited Series or TV Movie category.
Fun Fact: Benedict Cumberbatch is one nomination away from tying the record for most nominations in the category. Currently, he’s at six nominations — six nominations in seven years, mind you — while Hal Holbrook has the most with seven. He’ll need a few more wins to threaten that champion, however. Laurence Olivier has four wins to Cumberbatch’s one.
Notable Ineligible Series: Cody Fern, “American Horror Story: Apocalypse”; “American Crime Story”; “Genius”; “Fargo”

At the bottom of this page are IndieWire TV Critic Ben Travers’ predictions for Outstanding Lead Actor in a Limited Series or TV Movie . This article will be updated throughout the season, so make sure to keep checking IndieWire for all the latest buzz from the 2019 race, and read predictions in the rest of the categories, as well. The Creative Arts Emmy Awards will be given out Saturday, September 14 and Sunday, September 15. The 71st Annual Primetime Emmy Awards will take place at the Microsoft Theater in downtown Los Angeles on Sunday, September 22. Fox is broadcasting the ceremony.

Coming into the race, there was debate over whether or not Jharrel Jerome could break into a category with so many big-name contenders, while Mahershala Ali was sitting pretty as the frontrunner. Now the two-time Oscar-winner might be looking up at the breakout star of “When They See Us,” as plenty of A-list movie talent made the cut, but Netflix’s limited series is gaining momentum. Clearly Jerome getting his own episode — and being the only lead to play his role all the way through the time-jumping story — gave him a boost, but the show itself is being widely embraced, especially by actors.

That being said, “Chernobyl” star Jared Harris may have hopped his HBO teammate, as well. The five-episode historical story leads all limited series in nominations, and Harris snagged his second Emmy nod for leading the charge. After being snubbed for “The Crown” and “The Terror” in previous years, he wasn’t a sure thing, but just about everyone got swept up in the “Chernobyl” surge, and there’s a lot of love out there for its star.

Looking at the bottom half of the power rankings carries an odd sensation, since most of these actors were one-time frontrunners. When FX announced Sam Rockwell would be playing Bob Fosse, the recent Oscar-winner was destined for the awards race. Once people saw his performance, the applause were plentiful, yet now it seems like “Fosse/Verdon” is losing out to more recent, more widely seen nominees, despite its Hollywood pedigree. It seems like it will play more like FX’s “Feud,” which snagged 18 nominations but only two wins, and less like “American Crime Story,” which dominated.

Benicio del Toro is another actor who had awards attention before anyone even saw “Escape at Dannemora,” and buzz only grew after Showtime’s prison story became a hit. Perhaps if he can growl to enough Academy voters, he’ll scare up some new votes, but he’s another victim of timing. Showtime will have to work to overcome recency bias for this fall release. Of course, Amazon will have to work even harder for last summer’s critical hit, “A Very English Scandal.” Hugh Grant went on the campaign over the winter, snagging Golden Globe, BAFTA, and Screen Actors Guild Award nominations, but rallying that same kind of support without new material to talk about is harder six months later. Both campaigns will have to be aggressive if they want to topple the current frontrunners.

Will Win: Jharrel Jerome, “When They See Us”
Could Win: Jared Harris, “Chernobyl”
Should Win: Mahershala Ali, “True Detective”

This Article is related to: Awards and tagged Emmy Predictions, Emmys, Mahershala Ali