Coverage of both the Larry Nassar USA Gymnastics scandal and ongoing humanitarian crisis at the U.S.–Mexico border were repeatedly celebrated. 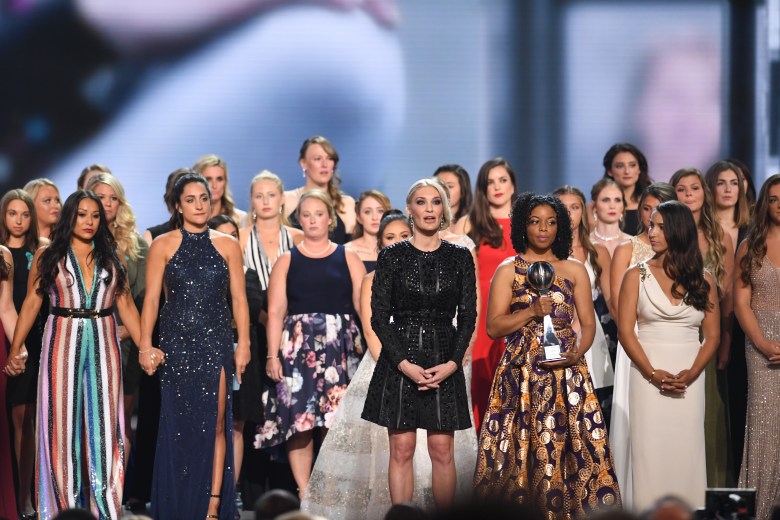 Survivors of the USA Gymnastics sex abuse scandal at the 2018 ESPY Awards.

The 78th Peabody Awards Board of Jurors announced its final batch of winners on April 23, revealing the winners of the News and Radio/Podcast categories and completing its list of Peabody 30 for programs released in 2018.

The stories told by the News and Radio/Podcast honorees run the gamut from local, to national, to global, all serving as a valuable antidote to cultural conversations awash in fake news. Among them, the tale of convicted serial child molester and former USA Gymnastics national team doctor Larry Nassar spurred coverage awarded in both news and podcast form, including ESPN’s “Spartan Silence: Crisis at Michigan State” and the Michigan Radio/NPR podcast “Believed.”

Two entrants from PBS are celebrated in the news category: a “Frontline” episode focused on the separation of children from their parents at the U.S.-Mexico border and a “PBS NewsHour” series looking at the country’s dependence on plastics and the implications on the global ecosystem.

Other winners in news include examinations of the education system in Washington state, the data harvesting scandal of Cambridge Analytica, a viral video of women and children murdered by Cameroonian soldiers who are eventually brought to justice, and the continued use by police of faulty tests with regards to suspicious substances found in the field.

In podcasts, winners range from investigative reporting into the allure of ISIS; the history of voter suppression Georgia; the continued practice of redlining – discouraging non-white people from living in certain neighborhoods by manipulating rentals and homebuying – in the real estate market, and the struggle with how to remember difficult periods of history as contextualized through Confederate monuments.

In addition to the Peabody 30 winners, the board of jurors awarded ProPublica its first-ever Peabody Catalyst Award for the independent, nonprofit newsroom’s June 2018 publishing of nearly eight minutes of sobs from Central American children separated from their parents at the U.S.-Mexico border, while Border Patrol agents mocked them, spurring a quick policy change from the Trump Administration.

“No fake news here,” said Jeffrey Jones, executive director of the Peabody Awards in a statement released April 23. “Rather, ProPublica worked with local sources to find and publicize incontrovertible evidence of government policies—and their horrific application—that the government was also overtly downplaying. That is what courageous and effective journalism looks like.”

A ceremony celebrating all honorees, including Rita Moreno, recipient of this year’s Peabody Career Achievement Award and hosted by Pulitzer Prize-winning journalist Ronan Farrow is scheduled for May 18 in New York City.

“Anatomy of a Killing” (BBC)

“Back of the Class” (NBC affiliate/KING)

“Separated: Children at the Border” (PBS)

This Article is related to: Awards and tagged BBC, ESPN, PBS, Peabody Awards