VFX supervisor Stefen Fangmeier goes inside the making of that maiden dragon flight in the premiere. 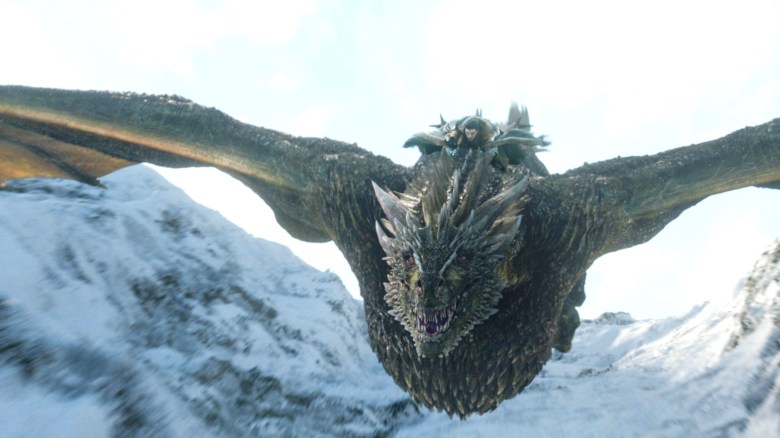 Although Jon Snow (Kit Harington) isn’t technically the King in the North anymore, he must feel like one after taking his first dragon ride with his girlfriend Daenerys Targaryen (Emilia Clarke) in the “Game of Thrones” premiere on Sunday. The breathtaking sequence highlights all that is right in Westeros, before everything will go so very wrong in the series in the episodes ahead.

“It’s in beautiful sunlight. You’re in this fantastic snowy landscape. Compared to what comes later, this was the moment of just pure bliss and fun,” said visual effects supervisor Stefen Fangmeier in an interview with IndieWire. “Then also it’s a little bit of a romantic moment with them at the end where they land there and before all the terrible stuff happens because obviously they know that the Night King is going to come with the army of the dead.”

Jon Snow’s joyride is also a big deal from a narrative standpoint, and not just because he got along with his girlfriend’s kids. In George R.R. Martin’s books, it’s emphasized that only a true Targaryen can ride — or perhaps pilot — a dragon. Jon’s acceptance by Rhaegal goes a long way in confirming his lineage, and also bodes well for a future of flying. After all, with war coming, having two pilot dragons on the human side will outnumber the undead dragon that the Night King stole.

“It’s Jon’s first time on the dragon. So there needed to be some danger, a little recklessness on Dany’s part to scare him a little bit and that’s sort of her attitude,” said Fangmeier. “It’s a little bit more of a roller coaster and it doesn’t have the purpose other than to get Jon comfortable with being on the dragon, which he later on will need to be.”

The Actors Get Buck Wild The dragon flight was planned out step-by-step through the pre-vis (pre-visualization) process, creating a storyboard of each moment that would be highlighted. Then, it was time for the next step in the Westerosi magic — having the actors simulate the ride in front of a green screen on a buck, something that looks like a giant mechanical bull that is also draped in green for computer-graphic enhancement later.

“Those moves need to be programmed into the motion-controlled buck, what the actors sit on as they’re on the dragon,” said Fangmeier. “That’s motion-controlled with hydraulics, and then there’s a spider cam, which is a camera mounted with four cables on the stage in each corner. It’s computer-controlled and you can program a certain movement relative to what the dragon is doing.”

Although digital doubles were used sparingly — for the wider shots where the actor’s faces weren’t needed — most of the actual riding is done by Harington and Clarke once the stunt people did a dry run on the bucks to troubleshoot any movements.

“Emilia had a lot of experience, and Kit is really a tough cookie. He’s like, ‘No problem here. Put me on there. I can do this all day,’” said Fangmeier. “They’re wearing a little bit under their clothing with the harness that ties into the buck so that they could never fall off. So it’s not necessarily the most comfortable thing to do. But they’re both really good sports about it.

“Because also it plays into later episodes, we must have probably shot with them 30 days on the buck. It’s definitely a time consuming process.” 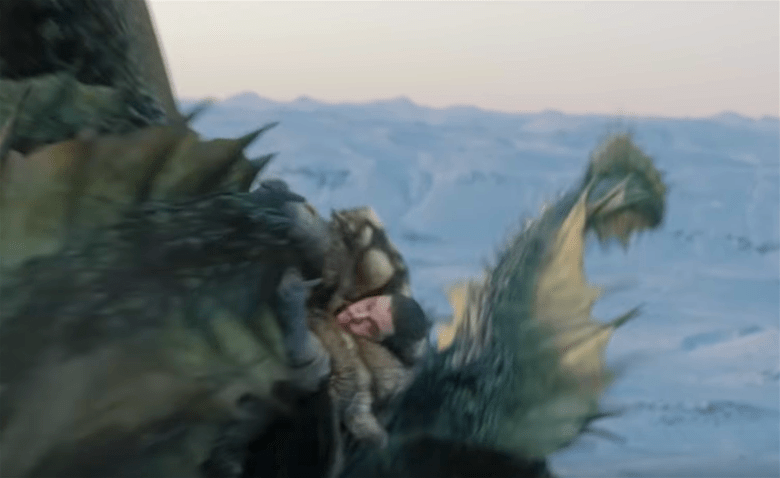 Although the viewers won’t ever know what it’s like to ride a dragon, Jon’s flight has its share of thrills to enjoy vicariously. One of the tense moments occurs when Rhaegal takes a pass that almost unseats Jon.

“We have one when he’s flying by Winterfell where he kind of goes sideways. Of course, the question is, well how could Jon stay on the dragon?” said Fangmeier. “There’s no saddle. There’s nothing. He’s just holding onto the horn. But there is where you break a little bit with reality since it’s dragons anyway.

“The actor has to go to a point of initiating some of the movement because obviously, gravity isn’t such that he’s doing 90 degrees. And so that requires a little bit of leaning and that has to be tied with what the buck is doing. The buck only has so much movement, and so the camera has to sort of counter-animate with that.”

Fangmeier, who also directed the dragon-centric movie “Eragon,” recalls another portion that had to be faked. He had shot footage of the real terrain in Iceland to be used in the dragons’ flight, but since he was in a helicopter, one steeper portion wasn’t possible.

“There are shots you can’t do with a helicopter. For instance, diving down into the canyon and going out of it,” he said. “It was more designed like a roller coaster … and similar to actually my dragon sequence in ‘Eragon.’”

And at the end when Jon and Dany land at the waterfall, that natural formation was anything but. “That waterfall didn’t exist. We were in a bit of a valley, but it wasn’t spectacular. Then Dan [Weiss] and David [Benioff] said, ‘Can we add a waterfall here that they stand in front of?’” said Fangmeier. “Luckily during scouting, I had seen one of the most popular waterfalls in Iceland where everybody goes, and on the way back from that shoot, I stopped with the camera crew and we shot some to get the running water. But then later on, we extended it and made it larger.” 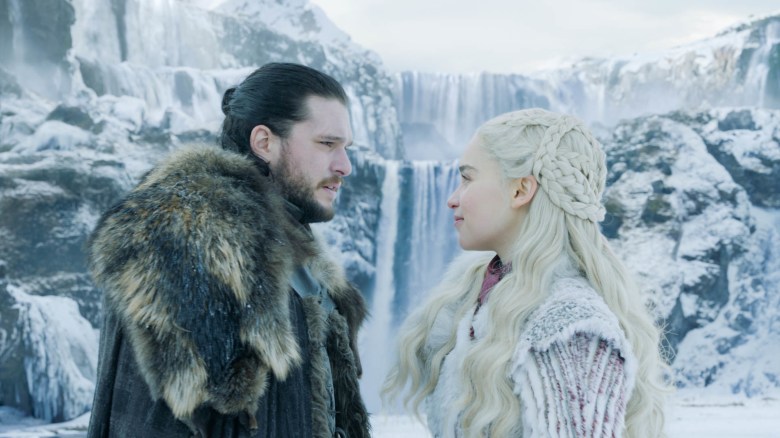 The scene is also unique in that it’s visually brighter than what viewers might be used to.

‘Generally, the ‘Game of Thrones’ aesthetic is very high contrast, almost a little bit desaturated,” he said. “I really pushed hard to keep the golden sunlight in and the blue from the clear day. When you have a blue sky, it sort of acts like a dome of blue ambient film. I knew that later on there would be a lot more darkness in the rest of the season, so to me, it was important to make this a bright and beautiful scene.

“Every shot also has complicated lighting setups because obviously, the light kind of needs to reflect what is going on through them. Is the sunlight there? So that sometimes we even had lighting rigs that we would move a little bit in order to indicate that they were traveling relative to the sun and things like that.”

Simulating flight also created challenges in filming the actors on the buck.

“It was very important to get the sense of speed because these dragons are going 100-120 miles an hour,” said Fangmeier. “We tried to get the wind interaction into the costumes. And that’s particularly difficult for Jon Snow because his coat is so heavy. It’s leather and fur.

“And so we tried to really get a lot with these air movers, to create the most amount of wind. The air movers mounted on the buck are actually screwed on the front of it so that it blows wind at them and hopefully not so much their eyes because then they start to squint. Although sometimes that’s okay for dramatic moments.”

Even though the ice-cold White Walkers have brought winter with them, expect for the action to heat up literally with more dragon fire. After all, this is based on Martin’s “A Song of Ice and Fire” books, and Daenerys is impervious to fire. (Maybe Jon needs to be tested, too.)

Fangmeier had worked on both the Loot Train sequence from last season as well as when Viserion burns down the wall, so he’s familiar with fire-breathing dragons and what lies ahead.

“You’re trying to get this column of fire to be very well-defined. But when you’re dealing with real-life physics of this fire, the flame thrower moving through space, certain things that we tried to do weren’t looking quite right. And so it takes a lot of finessing and figuring out. There’s so many more fire shots later on this season.”

Check out more behind-the-scenes dragon flying in the video below:

This Article is related to: Television and tagged Game of Thrones, HBO, Stefen Fangmeier, TV Interviews